Take your time. An injury is one of those things that can cut off a person’s career out of nowhere. You never know when you might see someone get hurt and how bad things are going to be, at least at first. Eventually you are going to find out just how severe the injury has gone. A WWE injury from earlier this year was rather bad and now we know how long the recovery is going to take.

Back at WrestleMania 36, Jimmy Uso suffered a torn ACL in a ladder match for the SmackDown Tag Team Titles. The injury caused a big issue for the Usos as there is only so much that can be done when one of the members is out of action. That was the case for the two of them, with Jimmy missing for a long time. Jey was still able to wrestle on his own, and now we have a big update on his brother’s status.

Jimmy returned during the main event of Clash Of Champions to throw in the towel for Jey against Roman Reigns. This was Jimmy’s first on-screen appearance in almost six months, though he did not do anything physical. In a new interview with TalkingSport, Jey revealed that Jimmy is not scheduled to return to the ring until January or February, with Jey promising to reform the team when Jimmy returns.

The team has been awesome for a long time. Check out what they can do when they are healthy:

Opinion: This is not exactly the best news to hear, but at least he is getting closer to healthy than he was before. The Usos are one of the best teams of their generation and it would be great to see them back at full health. It was nice to see Jimmy back even for a one off moment, but Jey was doing rather well in his one off main event level appearance. At least Jimmy seems to be getting better though, which is what matters most.

What do you think of the Usos? What should they do when they get back together? Let us know in the comments below. 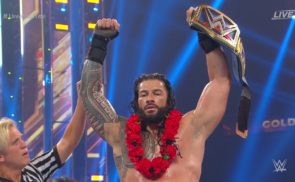