The big story coming out of last week is the full on split of the Wolves as Davey Richards cost Eddie Edwards his last shot at the TNA World Title. While you can probably guess the reason behind the split, it should be interesting to hear the actual explanation. Other than that we also have the saga of Braxton Sutter and company which seems to be setting up a wedding. Let’s get to it.

We open with a recap of the Expedition of Gold, which will take the Hardys to Tijuana, Mexico this week.

Moose is wrestling in a shirt for some reason here. The guys get things going with Steve bouncing off Moose multiple times. Rosemary offers a distraction so Steve can take over, which must last for a good fifteen seconds. Abyss’ interference does a bit better and everything breaks down with Decay taking over.

Moose will have none of that and LAUNCHES Steve onto Abyss at ringside. Rosemary jumps onto Moose’s back and it’s time for Brandi’s still awkward chops. A middle rope missile dropkick puts Rosemary down as Pope still tries to get Mini-Moose over as a nickname. The matching pump punches have Decay in trouble and stereo Game Changers are enough for the double pin at 5:43.

Eddie Edwards isn’t here to talk because he wants to hurt Davey.

Moose tells Brandi he’s there for her whenever she needs.  There was no hint of anything romantic in the way he said it.

We look back at the end of last week’s show.

Eddie calls out Davey but he gets Angelina Love instead, saying there’s no Davey until she says so. Basically Eddie abandoned Davey while he was recovering from knee surgery and forgot about his “brother”. Love says Eddie can have Davey now and introduces the American Wolf (new nickname) but Eddie cuts her off and says to let go of her husband’s balls.

Davey grabs the mic and goes on a rant about how he created the team and the Wolves’ Nation. Richards offers him a chance to leave but Eddie goes straight up the aisle to start the brawl. Security breaks it up so Eddie says this isn’t over as Davey tries to crawl in the ring. We get a challenge for a street fight later tonight and Davey seems more than game.

Mike Bennett has a bachelor party for Braxton Sutter, who is miserable. It’s basically a frat party with people all around thirty years old and Sutter wants to leave.

It’s off to Tijuana where the Hardys are challenging for the Mexican Tag Team Championships of the World. Matt and Jeff demand to speak to the promoter and yell in Spanish at a luchador who speaks English. Konnan, the promotion’s owner, wants to make money off their appearance.

Now we have Laurel Van Ness’ bachelorette party with Allie having st up a very sweet room with streamers, balloons and confetti everywhere. Maria yells at her for making it look like a children’s party. Allie is devastated when she hears about how it’s for Laurel and Braxton’s wedding.

Kingston chops away to start and shrugs off a dropkick by raking the eyes. We hit the choking on the middle rope before Jesse makes his comeback with clotheslines and a Blockbuster for two. An STO puts Jesse down for the same but he nails a quick enziguri. Godderz hits a springboard….I guess we’ll say forearm for the pin at 4:11.

The DCC comes out post match but Jesse is smart enough to bail.

The bachelor party continues to be horrible with an overweight man crushing the drug dealer.

Allie tries to liven the party up with noisemakers but Maria yells at her again. Sienna just wants to drink.

Tyrus has taken over Fact of Life and brings out someone who was never his friend: Eli Drake, whose arm is in a sling. Drake can’t sit at the desk so the sling comes off in a hurry. Eli yells at Tyrus for making decisions that he didn’t approve of and not watching his back like Tyrus is supposed to do. No one owns Tyrus and a match is made for next week.

Back in Tijuana, Konnan says he can’t pay the Hardys but his messenger says they don’t want money. The Hardys come in to see Konnan and agree to wrestle for the titles for no pay. Matt: “Money is for marks.” The Hardys leave and Konnan tells the staff to start making and selling as much bootleg Hardy merchandise as they can.

Maria yells at Allie for the amount of pink at the party. Allie can be a ring bearer next week and gets frosting thrown in her face. The ladies take the gifts (including lingerie) and leave.

We get the match from Tijuana with the Hardys challenging Super Crazy and Psicosis for the Crash Tag Team Titles. While the match is going on, the promotion’s women hit on Vanguard . We only see clips of the match with the Hardys hitting all their signature stuff to win with a Swanton to Crazy. Of note: the referee was blurred out because he works for Lucha Underground, who threatened legal action against TNA if they showed one of their contracted workers.

After the match, the Hardys teleport back to North Carolina before Konnan and company can stop them. Konnan: “WHAT DO YOU MEAN THEY DISAPPEARED???” Back in North Carolina, the Hardys literally throw the belts into a bag and go off to win the Mid-Atlantic Tag Team Titles next week.

Video on Brooke returning to TNA and being targeted by the Lady Squad.

Maria offers an early distraction to start and Sienna takes over with forearms and a spinebuster. Brooke gets in some forearms of her own as Madison Rayne explains why Maria is the most amazing Knockout ever. Another Maria distraction lets Sienna get in a running clothesline as Josh talks about how you can get a Louisville Slugger baseball bat signed by Jeff Hardy. Maria chokes on the rope and offers a distraction so Sienna can choke as well. As Maria talks about how the Knockouts show their midsections, Brooke fights off the double teaming and rolls Sienna up for the pin at 5:55.

Eli Drake commandeers a camera and promises to give Tyrus a beating next week.

Here’s Lashley for a chat. Lashley says it doesn’t matter if it’s wrestling or MMA because no one can hang with him. This brings out UFC fighter (currently facing a potential suspension for steroids) and professional wrestler Josh Barnett to give him a lecture about respecting the title. Lashley says this is his ring but has to escape an armbar. A challenge is issued but Barnett wants the title on the line. Bobby says he’ll fight anywhere anytime and the challenge is accepted for some point in the future.

Everyone has passed out at the bachelor party but Braxton is sitting there twirling his thumbs. He slowly gets up and puts the stripper on Mike’s lap for a quick picture. He then calls Maria and leaves the phone on the two of them before leaving.

Street fight. Angelina does Davey’s entrance, allowing him to jump Eddie from behind. There are weapons ready at ringside and Davey keeps beating him down as we take an early break. Back with Davey crushing Eddie’s hand with a chair but Edwards fights back anyway. Eddie and Angelina both have chairs but the distraction lets Davey swing a chair into Eddie’s for a knockdown.

Cue Eddie’s wife Alisha…who gets dropped with a single forearm. Angelina handcuffs her to the ropes but Eddie covers her up and takes the chair shots for her. Davey unloads on him with the chair while Angelina makes Alisha watch. There’s no referee as Eddie gets a Conchairto so Angelina counts the pin for a no contest at around 13:30.

Result: Eddie Edwards vs. Davey Richards went to a no contest (13:30)

A promo for next week’s Expedition of Gold wraps us up.

Remember to check out my website at kbwrestlingreviews.com, follow me on Twitter @kbreviews and pick up the History of the WWE’s Big Four Pay Per Views, now in PAPERBACK. Check out the information here: 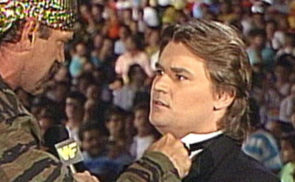