We’re on the way to Bound For Glory and that means we are starting to see the card coming together. This time around we are building towards the Tag Team Title match, as the Good Brothers and the Rascalz, who are likely heading towards a multi team title match, have their own match going on tonight. Let’s get to it.

Rosemary and Havok have to be held back to start so it’s Nevaeh running Taya over with a shoulder to start. The other two come in with Rosemary taking Havok down and hammering away to quite a bit of avail. Taya comes in but can’t whip Havok in, instead being clotheslined down.

Nevaeh grabs a front facelock and then hits a basement dropkick for two. Havok comes in and gets two off Nevaeh’s clothesline. A quick crawl between Havok’s legs allows the hot tag to Rosemary and it’s time to clean house. The Upside Down has Havok in trouble and a high crossbody puts her down again. Nevaeh comes back in for a German suplex to Rosemary but can’t hit one on Taya. The Road To Valhalla finishes Nevaeh at 6:53.

Result: Taya Valkyrie/Rosemary b. Havok/Nevaeh – Road To Valhalla to Nevaeh (6:53)

Post match Tasha Steelz and Kiera Hogan run in for the beatdown until Havok and Nevaeh make the save.

The Good Brothers are telling a story about being in a Japanese karaoke bar when the Motor City Machine Guns come in to ask if they do anything but tell stories all day. Alex Shelley talks about being near the top of the dojo while Karl Anderson was still making Riki Choshu’s meals. The Good Brothers aren’t impressed and can’t wait to kick out of the Guns’ finisher.

Rematch from last week and Kaleb With A K handles Dashwood’s entrance. Dashwood tries a kick to the ribs but gets driven into the corner in a hurry. A slam sets up a running backsplash for two and there are the shoulders to Dashwood’s ribs in the corner. Dashwood gets in a knee though and a neckbreaker over the middle rope sends us to a break.

Back with Grace’s neck being wrapped around the rope and having her throat pulled into a different rope. Grace sends her into the corner though and some running knees to the back into a running hip attack crush Dashwood. The Vader Bomb gets two and a hard clothesline gives Grace the same. Dashwood manages to tie her in the Tree of Woe for the Taste of Tenille but the Spotlight Kick is blocked. Kaleb’s distraction doesn’t work and Grace grabs the rear naked choke for the tap at 11:52.

Moose still can’t find EC3 but does attack an employee, earning a threat of an HR intervention. EC3 pops up to say the title’s funeral is next week. You have been warned.

Video on Rich Swann training to get back into the ring for Bound For Glory.

Flashback Moment of the Week: Gail Kim b. Madison Rayne to retain the Knockouts Title.

Rhino comes outside to see Heath, who might have some interest from Impact management. Heath paid for the infomercial with his credit cards so he still has the cash. Cue Hernandez and Reno Scum to jump them and take it back.

Post break, Rhino yells at Scott D’Amore for what just happened. D’Amore doesn’t like it but it’s Heath/Rhino vs. Reno Scum at Victory Road.

It’s Wentz and Dez for the team here and Dez starts with Anderson. Dez is sent into the corner for an elbow to the head but he comes out kicking. Wentz comes in and gets taken into the corner so the beating can be on. That doesn’t last long though as it’s quickly back to Dez for the double kicks to Anderson. Gallows doesn’t seem to mind and runs over Dez with a clothesline.

That means it’s Dez getting beaten down in the corner and the chinlock is on in a hurry. Gallows drives some elbows into the face and chest before grabbing his own chinlock. Dez fights up with a Rey Mysterio sitout bulldog and the hot tag brings in Wentz. The Rascalz pick up the pace with the backbreaker/top rope Meteora combination. The shove moonsault is broken up and it’s the spinebuster to Wentz into the Magic Killer for the pin at 7:09.

Post match Anderson says they’re here for the money and the titles.

Brian Myers and Tommy Dreamer have an old west staredown in the back and a challenge is made for Victory Road.

Kaleb and the banged up Tenille Dashwood are leaving when they run into Jordynne Grace. A third match is made for Victory Road, though Dashwood isn’t thrilled.

Some of the Wrestle House cast is around ringside and the winner gets to be John E. Bravo’s best man. Swinger jumps him to start with little success. Bahh sends him flying and isn’t about to be slammed. A rake to the eyes slows Bahh down a bit and Swinger stomps on Cousin Jake’s fingers. The distraction lets Swinger use Crazzy Steve’s monkey to knock Bahh silly for the pin at 1:44.

Post match Bravo says not so fast and wants the match restarted. Bahh runs him over and hits the Banzai Drop for the pin at 2:35 total.

Rohit Raju says everything should revolve around him, including Victory Road. That’s why he is debuting the Defeat Rohit Challenge. Cue TJP, but Raju says it can’t be him, Chris Bey or Trey challenging. TJP is off to get some Ben And Jerry’s.

Bravo is annoyed at the bad refereeing and doesn’t care if Bahh or TJP is the best man.

Here’s Eddie Edwards for a chat. He knows Eric Young attacked him last week so get out here right now. Cue Sami Callihan on the stage instead so Eddie is glad to beat him up again. Sami says he didn’t do it but Eddie wants to beat him up anyway. Hold on though, as Sami is willing to show Eddie who did attack him. The lights go out again and here’s Ken Shamrock to kick Eddie in the head. Shamrock shouts that Eddie needs to get out of his way and the ankle lock goes on.

In the back, Eric Young finds this hilarious and promises to destroy Young at Victory Road. As for Bound For Glory, whatever he does to Rich Swann is no longer his responsibility.

Kylie Rae comes up to see Susie in the back. Susie is worried at Kylie getting upset if she wins the title from Purrazzo. Of course Kylie isn’t because she would love to face Susie at Bound For Glory. She even got Susie some kickpads! Kylie says Susie’s time has come and leaves, with Susie looking into the mirror and Su Yung being teased again.

The North vs. Madman Fulton/Ace Austin

Fulton scares Ethan Page against the ropes to start but a quick shot to the back of the head staggers the big man. That earns Page a Snake Eyes so Josh Alexander hits Fulton in the back from the apron. Fulton pulls him outside and no sells a big boot from Page. Some double teaming has Fulton in trouble but he’s right back with a tilt-a-whirl slam to Alexander.

Now Austin is willing to come in with a slingshot legdrop for the first two. Fulton sends Alexander into the corner and the referee even has to check on things. Austin comes in and misses a charge though, allowing Page to get the tag to assist Alexander on a Blue Thunder Bomb. It’s Austin in trouble now with Page kneeing him in the face and grabbing a chinlock. Austin fights up with a dropkick and brings in Fulton, who no sells a discus forearm from Alexander.

Page and Austin come back in for a slugout until Austin hits a spinning top rope Fameasser. Everything breaks down and Austin climbs onto Fulton’s shoulders for a splash onto Alexander. Page is back up with a running big boot to Austin, who is tossed into Fulton. After a double clothesline puts Austin on the floor, Fulton is back up, only to be sent outside as well. The spinebuster finishes Austin at 10:15. 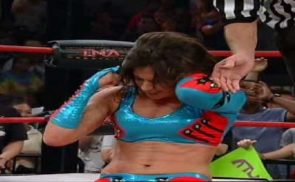