It’s time for a wedding! We’re in Las Vegas and that means we need to do something big, which may or may not work out very well. I mean, it’s a wrestling wedding so I wouldn’t expect it to go well but you never know. It’s a big night for Brian Cage and Melissa Santos so let’s get to it.

The opening video looks at Brian and Melissa’s relationship.

We have a special correspondent and Gail Kim is the first guest.

Here’s the North, in LAX gear and to LAX music. Ethan Page talks about how the fans were expecting something else. They came out here looking like idiots and fans cheered for them anyway. Josh Alexander talks about how this is a serious place and sacred ground but the fans are making him sick.

They are the Tag Team Champions and they’ll make you forget who LAX was. You CANNOT have LAX back so stop talking online about how much you miss them. Konnan doesn’t have the power to overturn the North so here’s Konnan to interrupt. He rants about how stupid they are but has some new people to come after the titles. Cue Rhino and Rob Van Dam so let’s ring the bell.

Rob Van Dam/Rhino vs. The North

Non-title. The champs get sent outside and we take an early break. Back with Van Dam monkey flipping Alexander and hitting Rolling Thunder for two. It’s off to Rhino to punch Page in the corner and run him over with a shoulder. Van Dam comes back in and gets taken into the champs’ corner with Alexander hitting a suplex for two of his own. Some right hands and a kick to the face get Rob out of trouble and Rhino comes back in for the running shoulders in the corner. Everything breaks down and Rhino runs Alexander over, setting up the Five Star for the pin at 6:42.

Gama Singh yells at the Desi Hit Squad and praises Mahabali Shera as the savior of the team.

Back to the wedding, where there are only wrestlers as guests of course. Reno Scum yells at a somewhat disheveled Eddie Edwards. Johnny Swinger comes in to say people watch him on ECW after Rockin Bowl.

Jake swings away to start but gets knocked down and chokes a lot. Shera misses a charge in the corner so Jake throws a running shoulder into the corner, only to have Shera come right back with a World’s Strongest Slam for the pin at 2:34.

Post match the beatdown continues as this feud must continue.

They fight over a wristlock as the announcers argue over how many times Rayne has been Knockouts Champion. Rayne takes her down and brags a lot, earning herself a basement dropkick. They slug it out on the floor with Dashwood kicking her in the face, only to miss a charge into the corner back inside.

Rayne tells a fan to “shut up old lady” and grabs the chinlock to keep things slow. Back up and a cutter gives Rayne two but another missed charge lets Dashwood hit the Taste of Tenille. The Spotlight Kick misses so it’s a neckbreaker for Rayne instead, setting up the Spotlight Kick to give Dashwood the pin at 8:12.

Rob Van Dam and Katie Forbes arrive at the wedding and are greeted by Rich Swann and Willie Mack. A discussion over the Tag Team Title shot at Bound For Glory ensues.

Dashwood gets the Knockouts Title shot at Bound For Glory. As she should…..I think.

Here’s Ken Shamrock for his big return. He has some great memories of being in this ring and he thanks the fans for their support. Shamrock was talking to Brian Cage when Moose interrupted and bragged about all of his skills, but Ken isn’t impressed. Now Moose isn’t here, meaning his whereabouts are like his resume: NOTHING. We get the call out but Moose comes up on screen from Shamrock’s gym. Some yelling ensues and Moose beats up a guy in a cage.

Taya Valkyrie asks Rosemary for help against Dashwood but doesn’t like Taya’s whining attitude. Until the old Taya is back, Rosemary will be no help. Taya even offers her a dress, which is thrown onto the floor.

OVE is not allowed into the reception.

Rayne coaches the bridal party on how to walk down the aisle. Taya comes in and says she needs help with Dashwood.

Jake Crist and Madman Fulton are here too and the winner goes on to an X-Division Title ladder match at Bound For Glory. Tessa hammers away to start so Dave kicks at the leg to no avail. A trip to the floor lets Fulton choke Tessa a bit, which is good for a quick ejection. Back in and Dave chokes in the corner and hits her in the back of the head, allowing Jake to get in his own choking. Tessa rolls him up for two but gets caught in something like a Go To Sleep for the same. A missed double stomp out of the corner misses as well and Tessa grabs the buzzsaw DDT for the pin at 6:20.

Post match Fulton is back in for a chokeslam.

Rayne tells Alisha Edwards to keep a better eye on her husband so Ace Austin can escort her at the wedding.

It’s time for the wedding with the Rascalz coughing a lot and the Deaners hitting on Jessika Havok. Rohit Raju is crying and Gama Singh has to glare at him to break it up. Taya glares at Rosemary for not wearing the dress she brought her but gets told to keep walking. Dreamer walks Melissa down the aisle.

Ryan is officiating the ceremony but hang on as Taya needs to brag about everything she has done. Ethan Page has objections….to how the company is run and wants royalty money. Eddie Edwards staggers in and vomits on Ryan before trying to beat up Austin. Dreamer asks if anyone can run the wedding. Cue James Mitchell to say you asked for a minister. He goes through their vows, gives Melissa his card just in case, and pronounces them man and wife. The reception is in the ring. Dreamer: “Right after this commercial break.”

Back from a break and they come into the ring for the first dance…and here’s Sami Callihan to sing his rendition of Here Comes The Bride. He’s here for a party instead of a fight because he’ll take the title at Bound For Glory. Sami wants to beat the Machine Brian Cage, and that’s his toast to the bride and the b****. Cage comes at him and Sami hits Melissa with a bottle to end the show as Sami knows he screwed up. 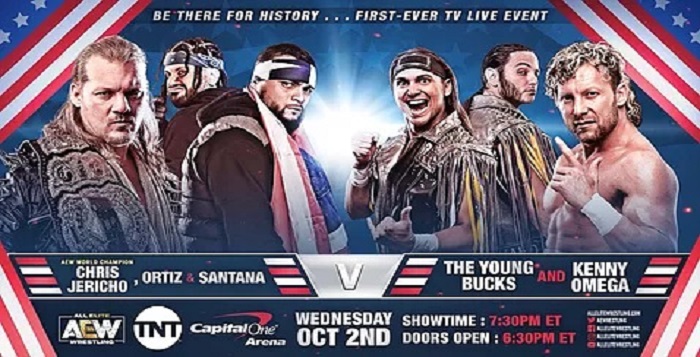 (VIDEO): Hello There. NXT Legend Returns To The Promotion And Sets His Sights On The NXT Title.