It’s the go home show for Victory Road, which means we are about a month away from Bound For Glory. Victory Road is being treated as a pretty big deal so it would make sense to have a good go home show. This week does feature a pretty big showdown with Aussie Open vs. the Motor City Machine Guns. Let’s get to it.

Myers is defending in a ladder match. Gujjar slugs away to start and hits a jumping knee to the face. A Samoan drop looks to set up the Gargoyle spear but Myers knees him out of the way. The first ladder is brought in but Gujjar dropkicks it into his face. Myers knocks him outside though and goes up for the title, only to be pulled down into a cutter.

Now the Gargoyle spear can send Myers into the ladder but the climb takes too long, as usual. The ladder is knocked into Gujjar and it’s time to bring in another ladder. Gujjar breaks that up and the other ladder is set up next to the first. They both climb with Myers being knocked off, only to come back up with a belly to back off the ladders.

That’s good for a crash out to the floor, where Myers bridges a ladder onto the steps. A powerbomb drops Gujjar onto the ladder but he’s still able to make the save back inside. Myers low blows Gujjar on the ladder though and then gets creative by duct taping Gujjar to the ladder. That’s enough for Myers to go up and retain at 12:20.

Heath comes up to Josh Alexander and Rich Swann to apologize for messing up last week. They have a six man tag at Victory Road, but Heath has an open challenge street fight against any member of Honor No More tonight. Swann offers help but Heath has to do this himself.

We look at Steve Maclin invading a Wrestling Revolver show to try to get to Sami Callihan.

Johnny Swinger is here with Dice, whose boot to the ribs is quickly caught. Grace slaps him in the face a few times and the Grace Driver finishes Dice in 43 seconds.

Video on Max the Impaler, who is facing Grace tomorrow night as per Masha Slamovich’s choice.

One fall to a finish. The fans are behind Yim, who stands back as the four guys get into separate brawls. We settle down to Miguel trying to cover Zayne for some near falls but Yim middle rope dropkicks both of them down. Taurus comes back in to headbutt the heck out of Yim so Kid comes in with a very spinning headscissors to put Taurus down on the floor. There’s the big dive into a hurricanrana, followed by stereo dives from Zayne and Miguel.

Yim hits one of her own and is the only one left standing on the floor. We take a break and come back with Miguel sending Kid into Zayne in the corner. Taurus lifts Kid up for a double hurricanrana to Zayne and Miguel before a series of strikes puts everyone down. Back up and Yim powerbombs Zayne and Protect Yo Neck gives her two. Taurus gets up to clean house and the over the shoulder piledriver finishes Kid at 11:45.

Eric Young tells the new Violent By Design to prove themselves to him. They chant answers in unison and he beats them all up.

A couple is arguing when the wife says that their kid isn’t his. The dad wants the name said, and cue Joe Hendry for the music video.

Here is Heath for an open challenge to a street fight with any member of Honor No More.

Street fight. Well hang on a second though as Eddie Edwards comes out and doesn’t want PCO to do this. Not that it matters as Heath talks PCO into it anyway. Heath dives onto PCO, who pops up and hammers away, much to Vincent’s (at ringside too) delight. PCO gets backdropped onto the ramp and they fight on the floor up to the stage.

A cart full of chairs is shoved around until PCO throws them onto a bunch of already set up chairs. That takes too long though and Heath DDTs him on the stage. A big toss off the stage sends PCO into the chairs so here is Honor No More to surround Heath. Rich Swann and Josh Alexander come in for the save and the fight is on.

With everyone else down, Vincent chairs Heath down but Heath pops back up for a Wake Up Call. PCO gets up, with a bunch of chairs hanging off of him, and wins a slugout inside. The chairs are piled up and PCO Mandible Claws him down, only to miss the Swanton onto said chairs. Heath hits a Wake Up call onto the chairs for the pin at 9:09.

The winners get a Tag Team Title shot at Bound For Glory. Shelley and Fletcher start things off with the bigger Fletcher shouldering him down. That earns him a crank on the arm and it’s off to Sabin for a knee drop. The even bigger Davis comes in to power Sabin into the corner but some kicks break that up without much trouble.

The Guns clear the ring and some kicks to Fletcher leave him down on the floor. Back in and the Aussies drive them together for a crash as we take a break. We come back with Fletcher hitting a delayed vertical suplex for two on Shelley. The beating doesn’t last long as it’s off to Sabin to clean house.

A missile dropkick/Downward Spiral combination gets two on Fletcher as everything breaks down. The Aussies plant Sabin for two as Shelley makes the save, only to be sent outside. The assisted Iconoclasm gets two on Sabin but Coriolis is broken up. Shelley is back in and Skull And Bones finishes Davis at 14:21.

Tasha Steelz aren’t having anything of Killer Kelly, who is sitting in Steelz’s locker room. Steelz isn’t sure what to think about that.

Gisele Shaw is ready to beat Mickie James and end her career.

And now, a contract signing, with Scott D’Amore emceeing. D’Amore brings out the three participants in Barbed Wire Massacre, with Moose, Steve Maclin and Sami Callihan…the latter of whom doesn’t show up. That’s cool with Moose, who compares Maclin’s time in the military with what is coming for him tomorrow night.

Maclin talks about how Moose has no idea what he is talking about and has never seen the things Maclin has seen. Tomorrow will be mayhem for all but here is Callihan to interrupt. Sami mocks both of them and has a seat, saying that the two of them made a grave mistake by crossing him.

Maclin wants Sami to sign….so Sami busts out a barbed wire pen. That takes too long so Maclin jabs Sami in the head with the other pen and it’s time to turn over some furniture. Sami gets tied in the Tree of Woe but Moose spears Maclin down. Another spear only hits table though, allowing Sami to sign in his own blood to end the show. 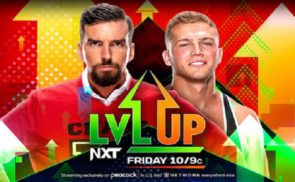