We’re just over a month away from Bound For Glory and I think you can see where the main event is going. Last week saw Eric Young vs. Tommy Dreamer because reasons, but Rich Swann made the save. I’m curious about some of the things around here though and if they can live up to the hype, they’ll be fine. Let’s get to it.

In memory of Barry Scott, the long time voice over man.

Rock, Paper Scissors determines that Kylie gets to start with Purrazzo and it’s an exchange of wristlocks to get things going. Lee comes in and gets headscissored down in a hurry, followed by an armdrag into an armbar. It’s off to Susie, who whips Kylie into Lee into the corner but Purrazzo gets in a knee to the back to cut her off. The leg crank goes on but Susie is right back up with a sunset flip out of the corner for two on Purrazzo.

Lee is right back in to pull on both arms at once before Purrazzo comes back in and gets flapjacked. The double tag brings Rae back in to clothesline Lee down. The Kylie Special is blocked so Kylie settles for a dropkick instead. Purrazzo hits Lee by mistake but Lee is fine enough to German suplex Rae into the corner. Unfortunately that would be the Susie corner, so Lee German suplexes her for two. Susie pops back up with Su Yung’s Arachnarana into the Panic Switch to finish Lee at 8:16.

Rohit Raju tries to get away from Trey Miguel, who would like an explanation from Raju for trying to play all of his challengers against each other. That is out of Raju’s control, but Trey is going to go smoke TJP and then get his title shot.

Tasha Steelz and Kiera Hogan annoy John E. Bravo and insist that they are not his best man. It’s Fallah Bahh, who can suddenly speak English.

Just like in Wrestle House, Cody offers Acey Romero the truce, but this time he gets kicked in the face. A backsplash from Acey gives Larry two and Cody is in a lot of trouble early on. Some shoulders to the ribs keep Cody down but he avoids the Best Hand In The House. The hot tag brings in Jake and everything breaks down. Acey takes out Cody with the Pounce but gets slammed by Jake. The Best Hand In The House finishes Jake for the pin at 4:00.

They lock hands to start and take each other to the mat until TJP gets caught in a headscissors. That doesn’t last long and they get up for an early standoff. TJP slips out of an electric chair but gets kicked down and hit with a standing moonsault for two. Trey gets taken down into a Sharpshooter with the arms trapped before going back to crank on the legs alone.

A double underhook crank doesn’t keep Trey down long so he goes up, only to get dropkicked out of the air. Trey’s spinning enziguri drops TJP though and we get a double breather. A hurricanrana sends TJP outside and Trey hits a suicide dive, only to take too long coming back in. TJP superplexes him down into the Octopus before rolling into a kneebar. The rope is grabbed so TJP kicks away at the leg to keep it in trouble. Trey gets in some knees to the chest though and hits a top rope Meteora for the pin at 7:15.

Ace Austin and Madman Fulton and the North have laid out the Rascalz.

Post break, the Motor City Machine Guns aren’t thrilled that the Rascalz can’t be cleared for later. The Good Brothers come in and offer their assistance but the Guns aren’t sure.

Here’s Rich Swann, in a walking boot and on crutches, for a chat. He asks for and receives Scott D’Amore’s presence because he needed to give something up a few weeks back. Then he saw Eric Young moving up to the top of the company so he wants something: the World Title shot at Bound For Glory. Swann brings up beating Young at Slammiversary but D’Amore says he can’t because that leg is too bad.

Swann talks about D’Amore being a wrestler and wanting to have the chance. He grew up in Baltimore and needed the heart of a lion and the fire of a dragon. D’Amore is thinking about it but here’s Young to shove him down. Swann snaps and goes after him but Young bails and threatens violence at Bound For Glory. D’Amore gets up and makes the match at Bound For Glory.

Taya Valkyrie wants to know where Rosemary was last week when she was getting beaten down. Rosemary: “How many resurrections have you accomplished?” Taya wants her there tonight, but Rosemary says she has some things to do first, so Taya needs to help her. We have a reluctant deal.

Willie starts fast with the armdrag and sends Myers outside for the slingshot dive. Myers grabs a Russian legsweep onto the ramp and they head back in for the punching and shouting. We hit the chinlock, followed by a jumping elbow for two on Mack. Myers is already frustrated so a turnbuckle pad comes off but it’s back to the chinlock.

Mack suplexes his way to freedom and it’s the swinging slam into a legdrop for two. Back up and a Michinoku Driver gives Myers his own two, only to get suplexed down again. Myers bails outside but gets thrown back in, where he kicks the rope low into Mack. The Implant DDT gets two but Myers misses a charge into the exposed buckle, allowing Mack to hit the Stunner for the pin at 7:59.

Rosemary asks Havok to try and help her resurrect James Mitchell but gets beaten down instead. Rosemary smiles.

Moose talks to Scott D’Amore about EC3 stealing his title and brainwashing his high school football coach. D’Amore tells him to get out of his face and accuses Moose of being insane. Moose isn’t pleased. An EC3 video pops up on the wall where he threatens to destroy the TNA World Title.

Post break, Moose calls “the Demo God” and asks what to do when your title is stolen. He likes what he is told and says next time, the bubbly is on him.

No Rosemary, but Tasha Steelz is in Kiera’s corner. Kiera is taken into another corner for some stomping as the beating is on fast. Taya sends her outside and then kicks away back inside. Josh calls this back and forth, though Hogan hasn’t had any offense yet. Kiera sends her into the corner and hits a running basement dropkick for two to get something going. Taya throws her outside in a heap, followed by the running hip attack in the corner. Tasha pulls Kiera outside for a breather so the referee checks on Kiera, allowing Tasha to get in a kick to the head. Kiera grabs the bridging fisherman’s neckbreaker for the pin at 3:14.

Rhino challenges Hernandez to some arm wrestling but it’s a ruse for Heath to steal Hernandez’s money.

Chris Bey asks Rohit Raju for his title rematch but TJP comes up for his title shot. Raju says Trey should get the shot so here’s Trey as well. Instead of a title match, we’re getting a triple threat #1 contenders match. The champ panics a bit as they all leave.

Anderson and Austin start things off with Anderson being sent into various corners. Gallows comes in to kick away and Austin gets beaten down again. A chop counts as a tag to Sabin, who comes in to forearm it out with Alexander. Page gets struck down and some kicks do the same to Austin. The villains are sent outside and we take a break.

Back with Alexander knocking Shelley down for two and handing it off to Page for a shot to the throat. Fulton gets in a few shots of his own and Shelley’s chop just annoys him. The rotating beating continues with Alexander knocking Shelley down a few more times. That lasts all of a few seconds and it’s Shelley fighting over to the corner in a hurry for the hot tag to Anderson.

The spinebuster gets two on Page and it’s back to Gallows for the power. There’s a belly to back suplex/neckbreaker combination to Page as everything breaks down. Anderson cutters Fulton but Austin dropkicks Gallows. Alexander takes Shelley into the corner and then clotheslines Gallows to the floor. The Northern Assault hits Sabin but Austin comes in to steal the pin at 14:00.

Everyone is annoyed at each other to end the show. 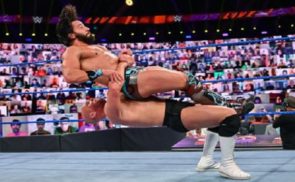