The Mexico run continues after last week’s big engagement between Brian Cage and Melissa Santos. That means he’ll be gone for another few weeks as we continue the Brock Lesnar style title reign. Sami Callihan is getting a title shot in about five weeks though and that could make for an interesting Bound For Glory. Let’s get to it.

Dashwood finds the early shoving amusing and they trade early arm control attempts. A kick to the back annoys Dashwood again so Kiera hides in the corner. That earns her an elbow to the face and a basement dropkick, meaning it’s time for some bailing to the floor. Back in and Kiera gets in her own kick to the face, followed by some choking in the corner.

There’s a running clothesline in the corner but Kiera can’t get her feet on the ropes to properly cheat. Dashwood makes her comeback with a variety of shots to the face and the Taste of Tenille. Kiera’s kick to the head gives her two of her own so Dashwood snaps off a wheelbarrow suplex. A high crossbody sets up the Spotlight (pretty much a Claymore) to finish Hogan at 8:58.

Sami Callihan promises to cause some trouble in Mexico tonight.

The North is proud of getting rid of LAX and wants to know why more people aren’t talking about them. They should be more people’s favorite tag team.

Dinastia is the reigning AAA Mini Champion. Elgin shoves him down to start so Dinastia tries a waistlock for the usual unfunny visual. A high crossbody is caught in a one arm tilt-a-whirl backbreaker as the fans are starting to get behind Elgin. There’s the apron bomb and an Emerald Flosion, the finisher of Naomichi Marufuji, who will be having a match against someone to be named at Bound For Glory, for the pin at 3:11.

Elgin talks about the things he has done over his career (without mentioning names) but there was one man in Japan he never faced. Marufuji is coming to Chicago and they’ll see each other.

In Rosemary’s….whatever it is, Taya Valkyrie complains to Rosemary about Tenille Dashwood getting the spotlight. Rosemary: “How do you keep getting in here?” Taya gives her a phone and suggests they have mimosas. Rosemary: “MOSAS??”

TJP steals Fallah Bahh’s lunch and tries to teach him to find his voice.

Flashback Moment of the Week: LAX vs. OVE from Bound For Glory.

James Mitchell warns Havok to leave Su Yung alone. Even he is scared of what Yung is going to do next.

Wagner’s son, El Hijo de Dr. Wagner Jr. I presume, is here with him. Texano jumps him during the pre-match speech and Wagner loses his mask, which he isn’t supposed to be wearing anymore anyway. After a quick trip to the floor, it’s time to start working on Wagner’s leg but the referee won’t let Texano use the bull rope.

Wagner grabs a cutter for a breather and a delayed two, followed by a missed charge to send Texano outside. The dive to the floor takes Texano down again but he grabs a hanging DDT on the way back in. Texano goes up top but gets superplexed back down, setting up a hammerlock lariat. The Dr. Driver (Michinoku Driver) finishes Texano at 5:55.

Ace Austin is scared of Eddie Edwards hurting him and wants Alisha to stay in the back during their match tonight.

LAX is packing up the clubhouse when Rich Swann and Willie Mack come in. Respect is shown and Swann/Mack want to have LAX’s last match around here. Konnan promises to get it made.

Eddie charges in and they trade chops in the corner with Austin being knocked outside. That means the big dive as Josh talks about how horrible of a human Ace really is. Callis: “If Ace kills Eddie Edwards, it saves Alisha the cost of a divorce.” Eddie crotches him against the post but Ace is fine enough to get in a kick to the head. The playing card slices open Eddie’s finger but Eddie Hulks Up.

The Blue Thunder Bomb gives Eddie two and he hammers away in the corner like he’s in a match with a wrestler who wants to steal his wife. Ace gets in a baton shot to the face to knock Eddie silly and we take a break. Back with Eddie fighting out of a dragon sleeper and grabbing the tiger driver for two. Ace tries to bail so Eddie hits the suicide dive and stomps on the chair Ace tries to grab. The handstand on the apron avoids a chair shot so Eddie just throws the chair at the arm for the DQ at 13:15.

Result: Ace Austin b. Eddie Edwards via DQ when Eddie used a chair (13:15)

Post match Eddie stays on him and beats up some security to go further over the edge. Ace is clutching his arm on the floor.

Brian Cage and Melissa Santos are getting married in two weeks and Cage isn’t vacating the title.

Eddie and Alisha yell at each other as Ace is put in the ambulance. She yells even more and leaves with the ambulance as Eddie is stunned.

The Deaners are here with the Squad, who are in Deaner style gear. There is no Gama Singh, who was last seen on the farm. Nino flips over Singh to start and runs him over with a shoulder before it’s off to Mami vs. Raju. Mami manages a Matrix and a clothesline gives her two. It’s already back to Singh to dropkick Nino’s knee, only to miss a middle rope elbow. We get the required double Stinkface and the rather rotund Nino hits a suicide flip dive. Mami dives off the middle rope to take all three of them out again. Back in and some Squad miscommunication sets up Nino’s top rope splash for the pin at 5:27.

Post match Mahabali Shera returns to beat up the Deaners and officially join the Squad. Gama Singh is very pleased.

Street fight. They start on the stage with OVE getting knocked down the ramp. Crist gets sent face first into the apron and hurricanranaed down, leaving Tessa to stare at Sami. Another knockdown has Callihan in trouble and we take a break. Back with weapons in the ring and Tessa planting Jake with a tornado DDT. Sami and Dreamer take their places in the ring and fight over the staple gun with Sami taking a shot to the chest. OVE gets tied in Trees of Woe for almost stereo baseball slide dropkicks into chars to their faces.

Stereo cutters get a double near fall but Dreamer gets sent hard into the corner. Tessa fights both of them at once but it’s a double big boot to take her down. A cutter gets two on Tessa to put her in trouble until Dreamer gets back up for the save. Sami gets in a baseball bat to Tessa’s ribs but Dreamer hits him with a kendo stick. Cue Madman Fulton for a distraction though, allowing Callihan to get in the Cactus Special to pin Dreamer at 9:23.

Post match Tessa beats up OVE, including Fulton, but Sami gets in a shot from behind to take her down. Rob Van Dam and Rhino run in for the save. 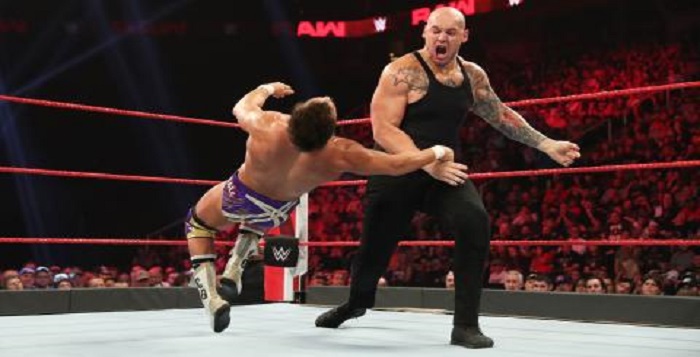