Tonight is a big show for TNA as we have Bobby Roode vs. Lashley for the World Title and the two semi-finals matches in the tag team tournament. TNA is capable of throwing a lot of good wrestling at us and having a solid show when they cut out all the storyline nonsense. Granted at this point they need to worry about having a place to air their TV shows instead of what’s on them. Let’s get to it.

Lashley arrived earlier today. I wish regular companies praised you for showing up for your job.

We open with a recap of the first Lashley vs. Roode match. I’m not sure what I think about Roode losing the first time and potentially winning a rematch to even the series. There would be something to be said about a guy rising to make two unbeatable forces.

King and Ki get things going with a quick wrestling sequence on the mat until Kenny sends him into the corner to take over. Ki takes him into a corner of his own and snaps off a chop before they circle each other again. Off to Joe vs. MVP with the Samoan cranking on a hammerlock but MVP rolls into a headlock to escape. Joe comes back with a legbar, sending MVP running into the ropes.

Ki gets another tag to face MVP but gets driven into the corner by King to give the heels control. That doesn’t last long though as a chop and snapmare get to for Ki and it’s back to Joe for some right hands. MVP pulls his partner to the floor for a breather so Low Ki just dives onto both of them to take over again. Back in and Ki kicks King in the chest for two but poses too long, allowing MVP to nail him in the back of the head.

Kenny works on the arms again for a few seconds until Ki just nails both guys with kicks and makes the hot tag. Joe cleans house and King taps to the Clutch in front of the referee but it doesn’t count for some reason. MVP makes the save as everything breaks down. Ki dives over the top onto MVP with a kick to the head, setting up the Clutch on King for the submission at 15:20.

D-Von says Bram is just a punk. He likes a fight just as much as anyone and has something up his sleeve for Magnus. D-Von’s phone rings and his buddy is here.

Video on Roode vs. Lashley.

Here’s Bram who says he’s rewriting history. He’s going to destroy the brotherhood of hardcore and nothing is going to stop him. D-Von and Abyss’ time is up and it’s now Bram on top. He wants to call out his brother Magnus and here’s the other Brit to join in the fun. Magnus says they may not see eye to eye but they’re brothers due to the blood they’ve spilled. They’ve been disturbing the peace since they were kids and Bram’s potential can be unlimited.

Magnus is still the guy that broke the glass ceiling for the Brits and it’s their time. Bram says they’re going to make all the hardcore dinosaurs extinct but here’s D-Von to interrupt. He says the two guys in the ring are the only ones that believe everything they’re saying. Now it’s time for D-Von’s backup and of course it’s Tommy Dreamer. I mean, where would we be without Tommy Dreamer in 2014? The brawl is on and the Americans clean house.

Madison Rayne and Taryn Terrell don’t like each other but they’ll work together against the Beautiful People.

Shark Boy is annoyed that some kids interrupt his hot dog to request an autograph. Simon Diamond comes in to yell at him and wants the REAL Shark Boy back. Sharky says SHELL YEAH and leaves so a cameraman can ask Diamond if that’s possible. Diamond: “Of course not!”

Angelina and Madison get things going with a brief slugout until Taryn gets two off a swinging neckbreaker. Some drop toeholds put the Beautiful People down and a dropkick puts them down again. Terrell knocks them outside but Madison goes to throw them back in instead of tagging. She also watches Velvet trip Taryn to take over and doesn’t seem to mind all that much.

Terrell comes back with a double clothesline but Rayne drops down again instead of taking the tag. That’s fine with Taryn as \she cross bodies both Beautiful People, only to have Madison come in without a tag. She cleans house but nails Terrell and lays her out with the Rayne Drop. Madison walks out and the Beautiful People get the pin at 4:56.

Angle promises to call it down the middle.

Matt and Ethan trade hands to the face to start before Carter takes him down into the corner. It’s quickly off to Jeff for a middle rope splash after Matt takes Ethan down with a suplex. A headscissors puts Carter down again and there’s Poetry in Motion, followed by the Side Effect for two. Tyrus gets the tag to clean house and Matt is in trouble. It’s back to Carter to slam Matt face first into the mat before Tyrus slaps on a nerve hold.

Carter comes back in almost immediately with a chinlock of his own before mocking Sting in the corner. Matt kicks him away though and makes the hot tag to Jeff. The more famous Hardy destroys Ethan with the usual as everything breaks down. Tyrus comes in off the tag and nails a double clothesline, only to miss a middle rope splash. The Twisting Stunner and Twist of Fate set up the Swanton to give Matt the pin at 7:06.

Ethan blames Tyrus for the loss.

Lashley is getting ready.

The Revolution is in the ring and Storm says there’s always a calm before the storm. TNA needs to listen to him: the storm is very close. Sanada and Manik were lost on their own but now they preach his gospel. They want another now and that man is Davey Richards. This brings out Davey on his own (with no belt) but he isn’t all that talkative.

Storm says Davey is in a great tag team, but he’s (Storm) been in several great tag teams of his own. His partners let him down though, so Davey needs to join the team so that will never happen. Cue Edwards to say this isn’t something Davey should listen to because Storm is out of his mind. Richards takes the mic away and says he can speak for himself. Eddie says Storm is crazy and wants to fight right now. He slaps James’ face and we have a match.

Joined in progress after a break.  Edwards nails a kick to the head to start but he stops to look at Davey, allowing Storm to nail a running shot in the corner to take over. James hammers away with forearms but charges into a boot to the face. An over the shoulder Stunner out of the corner gets two on James but he comes back with a DDT to plant Edwards.

Richards is looking conflicted as Storm stalks Edwards. A mic shot to Edwards’ head misses and Eddie grabs a rollup for two. Edwards dives on Storm as Manik goes over and whispers to Richards. That earns Manik a baseball slide but Davey gets up to yell, allowing James to hit the Last Call for the pin at 5:11.

They have a ton of time for this, Lashley is defending and Kurt Angle is guest referee. MVP and King are nowhere in sight. Lashley powers Bobby into the corner to start and easily takes him down with an amateur move. A hard shoulder to the ribs has Roode in even more trouble but Bobby comes back with a clothesline and tells Lashley to bring it on. The champ is all fired up but his clothesline is countered into the Crossface, sending Lashley out to the floor.

We take a break and come back with Lashley holding a reverse wasitlock until Bobby fights up with forearms. A quick Blockbuster gets two but Roode charges into a spinning spinebuster. Lashley ducks another shot but clotheslines Angle (first time he’s meant anything in the match) by mistake. The Roode Bomb is countered and Lashley nails the spear with no one to count the pin. Another spear hits Angle to knock him to the floor, allowing Roode to enziguri Lashley to the floor.

Bobby follows and avoids a spear, sending a ring attendant flying. A Roode Bomb on the ramp puts both guys down but there’s still no Angle to count anything. Instead Brian Hebner comes in to count the near fall and Bobby is frustrated. Lashley hits Roode low and gets the belt but Hebner says no.

That earns him a knockout clothesline, allowing Lashley to hit Roode with the belt. Angle comes in to count two and is finally back to his feet. The Roode Bomb is countered and Lashley snaps Bobby’s throat across the top rope. Another attempt is countered into a sunset flip attempt but Roode falls on top for the pin and the title at 17:49.

The announcers mention a rematch clause as the show ends. 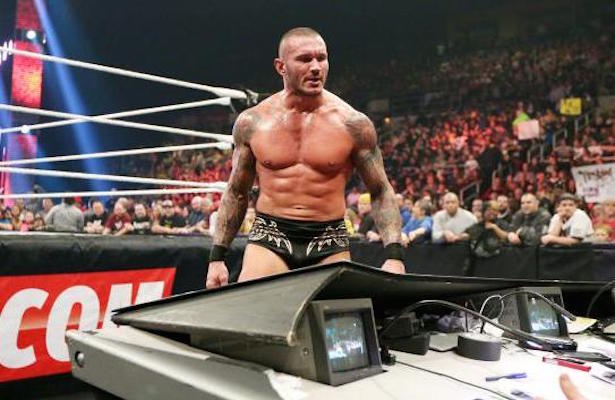