It’s the go home show for Bound For Glory and the card is set. That could leave a few different directions to choose this week and I’m curious to see where things are going to go. The good thing is that Impact has earned the benefit of the doubt over….dang a year plus or so? Let’s get to it.

For the Bound For Glory Tag Team Title shot and that would be Chris Bey/Hikuleo for the Club. Finlay starts with Hikuleo with the big man knocking Finlay down without much effort. It’s already off to Robinson, who backsplashes Bey for a fast two. Robinson knocks Bey off the top and a double bulldog drops Hikuleo for two. Finlay gets knocked down though and it’s Bey coming in with a springboard rake to the back.

The chinlock goes on but Finlay gets up and, with Bey holding a leg, hops over for the tag to Robinson. Everything breaks down and a Russian legsweep/running big boot gets two on Bey with Hikuleo making the save. The referee gets bumped so Hikuleo’s chokeslam gets no count. Another referee runs in to count two but Finlay manages a cutter. The double tag brings in Robinson to strike away on Hikuleo but a snap powerslam plants Robinson back down. Everything breaks down and it’s a double rollup to give us a double pin at 9:22.

Result: Bullet Club vs. FinJuice went to a double pin (9:22)

Post break the referees explain things to Scott D’Amore, who will make a decision by the end of the night.

Here’s what’s coming tonight and at Bound For Glory.

Josh Alexander talks about growing up in the middle of nowhere and not being able to afford to play hockey. Then he found pro wrestling and he was instantly hooked. He started wrestling but broke his neck and had to have surgery. Somehow he came back and then broke his neck again but actually came back one more time, albeit with a different attitude. Now he wanted to put in the work to become the best he could be, even if it was just in Canada. He won the Destiny Wrestling World Title and then got signed by Impact Wrestling (with a clip of Scott D’Amore handing him the contract).

It was off to Impact Wrestling, where he wanted to win the X-Division Title, after being inspired by Low Ki. He held the title for so long that there was only one thing left for him to do, which led him to Option C and the main event of Bound For Glory. It isn’t that failure isn’t an option, but Alexander doesn’t think he can fail.

Three way tag between the six people in the Digital Media Title match at Bound For Glory. Grace powers Green into the corner and it’s off to Bahh, who doesn’t seen to scare Green. It’s off to Steve to hammer away on Bahh in the corner. Skyler comes in to take over on Steve, who bites Dashwood in the face to escape.

That’s enough for the hot tag to Grace, meaning it’s time to clean house. The running knees in the corner set up the running backsplash to crush Skyler. Everything breaks down and Skyler has to save Dashwood from the Banzai Drop. Steve hits the middle rope DDT on Bahh but Dashwood sneaks in with the Spotlight Kick to finish Bahh at 4:25.

Here is a serious Rhino for a chat but Heath cuts him off before anything can be said. Heath says it has been a little while but they have been through a lot over the years. Their families know each other but Heath didn’t hear from him throughout the course of his injury. Heath knows it’s Eric Young doing this to Rhino but the one thing he wants Rhino to know is that he misses you. His daughters miss Uncle Rhino and that’s good for a smile, but Violent By Design interrupts.

Eric Young says Violent By Design isn’t something you walk away from. Heath makes it sound like a cult and says Rhino is brainwashed. The brawl is on and Heath gets beaten down until Rhino finally pulls Young off. Rhino teases Goring Heath but walks out instead, leaving Heath to get beaten down.

This is James’ first Impact match in six years and Tasha Steelz is here with Evans. Mickie gets shoved down by the much bigger Evans to start but slugs away anyway. Some forearms are cut off by a Steelz distraction, allowing Evans to choke on the ropes. We hit the bearhug, with Mickie biting her way to freedom. The MickieDT is blocked so Mickie settles for the middle rope Thesz press for a near fall. Cue Deonna Purrazzo for a distraction, allowing Evans to hit a full nelson slam for two of her own. Evans misses a charge into the post, so Mickie kicks her in the head and hits the MickieDT for the pin at 7:27.

Post match, Purrazzo gets in James’ face but there is no contact allowed. Instead, here is Matthew Rehwoldt to lay Mickie out instead.

Post break, Scott D’Amore isn’t cool with what just happened. While Purrazzo didn’t break the agreement, she broke the intent of it and should be stripped of the title. That’s not what D’Amore wants though, because he would rather see her lose it at Bound For Glory. Purrazzo isn’t happy so D’Amore bans Rehwoldt from ringside for the title match to make it worse.

Brian Myers isn’t happy with the Learning Tree for screwing up last week and fires Manny Lemons (who seems to explode). Sam Beale is cut as well, but he asks for an autograph from Myers. Instead, he has to settle for VSK in a disappointing downgrade.

Scott D’Amore is in his office for the Knockouts Tag Team Titles contract signing but no one shows up. Cue RD Evans, the IInspiration’s entertainment lawyer (and former barrister for Deonna Purrazzo), with Decay appearing as well. Rosemary isn’t happy about having to sign in ink instead of blood but the champs are in anyway. Evans signs for the IInspiration and we get the promise of heads being bitten off.

They go with the grappling to start with Miguel throwing him down, giving us a standoff. Zayne rides Miguel down to play some mind games of his own as commentary promises that it is going to pick up. Miguel sends him outside and loads up the dive but Zayne comes back in and we get a kneeling staredown to keep up the mind games. Zayne scores with an enziguri and they both crash out to the floor as we take a break.

Back with Miguel pulling him down into something like a reverse Koji Clutch to put Zayne in trouble. With that broken up, Miguel goes up but Zayne hits a running flip super hurricanrana (because he can just do that) to bring Miguel back down. Some kicks rock Zayne, who is back with a jumping knee. Zayne puts him on top but has to block a sunset bomb. The 619 around the post rocks Zayne though and the top rope Meteora finishes for Miguel at 11:56.

Post match here is Steve Maclin to lay Miguel off but Bullet Club comes in to jump Maclin. El Phantasmo hits the big low blow on Miguel so the Club can stand tall.

Bound For Glory rundown, including the announcement of the triple threat Tag Team Title match.

Here is Josh Alexander for the final chat before Bound For Glory. He is two days away from a shot at the World Title and doesn’t understand what a risk is. Alexander spent years at a construction site but took the chance to prove that he could do everything he dreamed of doing. That was a risk, but the risk that he will not take is letting his boys think he won’t take a shot. Cue Christian Cage to say he knows what it’s like to be on this stage. Everything comes down to emotion and you have to be able to keep it in check. Some people crack under the pressure but some people thrive and win World Titles, like Christian himself.

Over the last few weeks, Christian hasn’t seen anything to suggest that Alexander has what it takes. Alexander has heard all of this before, including about Christian when he first came here in 2005. As long as Christian is getting paid by a billionaire in another company, he can’t be the face of Impact Wrestling. At Bound For Glory, he’s slamming the Forbidden Door in Christian’s face because he’s the best in the world. Christian: “You’re not even the best wrestler from Canada.” The brawl is on and security/wrestlers break it up to end the show. 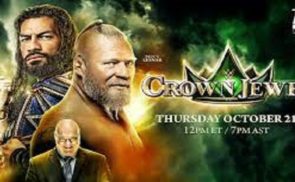