We’re getting closer and closer to Homecoming and that could mean some interesting build as the final few weeks remain. Considering the last two episodes of the year are going to be Best Of shows, there’s only so much time remaining to really make things going. Hopefully the company figures that out and starts pushing things. Let’s get to it.

The opening recap looks at a little bit of everything around here.

Swann and Fenix start things off and go with some grappling, only to have the flip into a standoff. Fenix flips across the ring but Swann flips over him for the second standoff in a row. With nothing having happened, we’ll go off to Mack vs. Pentagon for some Lucha Underground flavor. Pentagon throws up CERO MIEDO but Mack gets in his face too. We finally get to some offense as they slug it out but a four way knockdown ensues without much effort.

Mack kicks Pentagon in the face again and snaps off a hurricanrana. A Samoan drop into the standing moonsault set up Swann’s middle rope 450 but Fenix is right back with a double Lethal Injection. Pentagon follows that up with a pair of Sling Blades and it’s the What’s Up Double stomp to Swann, which still looks painful. Swann is fine enough to break up Fenix’s springboard, leaving Mack to Pounce Pentagon to the floor. The running flip dive has Pentagon in more trouble but it’s time for Swann and Fenix to hit their own dives.

Back from a break with Mack chopping Fenix down and then for a change, Mack chops Fenix down. Fenix goes with a spinning kick to the face but Swann breaks up something off the top. Pentagon isn’t having that though as it’s the spike Fear Factor onto the apron to crush Swann. Back in and a springboard headbutt sets up the wheelbarrow flip splash to finish Mack at 15:41.

Post match here’s LAX minus Konnan to congratulate the Lucha Bros on the win. They’ve already beaten the best teams in the world, but now they want the Lucha Bros. The match is set for Homecoming.

Next week: qualifying matches for Ultimate X at Homecoming.

Video on Brian Cage, who is ready to finally get his chance to be on top.

LAX comes in to see Konnan, who isn’t cool with them making that announcement. He’s worried about the personal issues that have flared up in the past when we try to have dream matches. Konnan has to do something now and leaves.

They grapple a bit to start with the much bigger Grace winning the power battle. The whip spinebuster gets two but it’s too early for the bearhug. Katarina gets in some shots in the corner and puts on the reverse chinlock to little avail. The fireman’s carry just isn’t happening so Katarina switches to the top rope DDT for two. A heck of a Pounce sends Katarina flying and hits some running knees in the corner. There’s a Vader Bomb and the bearhug makes Katarina tap at 6:10.

KM and Fallah Bahh have lost their money gambling because they’re not all that bright. Scarlett Bordeaux shows up and says a lot of people are trying to get her attention.

A referee comes in to see Tessa and tells her that she can’t beat up referees. Yeah whatever.

Tommy Dreamer, now in a Superstar Billy Graham shirt, talks about how Eli Drake is everything he hates about people today. Drake is an entitled millennial you see and tries to be the Rock and Steve Austin.Drake lost the title and has just been mediocre since then and he’s not ending Dreamer’s career. Dreamer is done when he says he is.

Rae ducks behind her and dances to start so Taya hits a forearm in the corner. That earns her a middle rope dropkick to give Rae two but Taya is right back with the running hip attack in the corner. Rae slips out of the Road to Valhalla and dances some more, earning herself a curb stomp and a modified STF for the tap at 2:45.

Post match Tessa runs in and beats Taya down. The referee from earlier comes in for the save and gets punched in the face. More referees come in and get beaten up….so GAIL KIM makes the save.

Video on Johnny Impact being ready to defend the title against anyone, including Cage.

Killer Kross again offers his assistance to Impact but gets turned down. That’s not cool with Kross.

The Rascalz are a trio with Trey Miguel, Dezmond Xavier and Zachary Wentz with Miguel sitting out this time. Dezmond headlocks Sydal to start and flips away from some early shots to the ribs. Sydal has no idea where Dezmond is and it’s off to Wentz for some yelling. Bey comes in and gets yelled at, followed by a Bronco Buster.

Some rapid fire kicks and a double stomp have Sydal in more trouble and there are the stereo suicide dives, which you had to know were coming. Back in and some kicks put Sydal down before Wentz does a standing moonsault….from about a foot away from Sydal’s feet. Not that it matters as Xavier shoves him over so the moonsault hits the chest for the pin at 3:09.

Kiera Hogan doesn’t believe that Allie is fully evil because Allie didn’t attack her when she had the chance. Allie can fight this.

Eddie Edwards is in a mental hospital with Alisha Edwards saying she had no choice. The doctor comes in and says the medicine Eddie is on takes some time to work. Alisha and the doctor leave and we come back to Moose coming in to see Eddie. Moose even has a book, called Anything Is Possible: The Eddie Edwards Story. He wants to know why all the important parts are missing. Like Eddie abandoning Moose or Alisha walking out on him. The book is a fraud…and that’s it.

We look back at Alisha having Eddie committed.

Eli Drake says his issues aren’t with hardcore wrestling. Apparently he touched a nerve in Tommy Dreamer and tonight, Dreamer is going to the retirement home.

Matt Sydal talks to Ethan Page about how his path to success keeps messing up. Page tries to calm him down but Sydal wants to show him the path to the X-Division Title. Next week: they’ll meet in an Ultimate X qualifying match.

They circle each other for a long time, likely as Dreamer needs a bit of a breather from walking down to the ring. Drake shoulders him down and more circling ensues. Dreamer can’t get anywhere with a wristlock so Drake talks a lot of trash. A cutter sends Drake to the floor…and he takes the countout. Actually hang on as we’re restarting this as a No DQ match.

We’re back with Dreamer spitting water in Drake’s face on the stage. Dreamer grabs the trashcan full of weapons and hits him with a box of donuts, of course stopping for a bite. Drake gets drenched with some water, which only seems to wake him up as he suplexed Dreamer onto the ramp. A catapult sends Dreamer’s throat first into the bottom rope and a jumping neckbreaker gets two. The chair is set up for the drop toehold for two on Dreamer so Drake picks the chair up.

A middle rope chair shot is blocked by a raised boot but the Dreamer DDT is countered with a leg trip to send Dreamer into the chair again. The DDT connects for two a few seconds later but Drake hits him low and nails the Gravy Train….for two? With nothing else working, Drake puts a chair around Dreamer’s neck and hits the chair with an oar for the pin at 12:04.

Result: Eli Drake b. Tommy Dreamer – Drake wrapped a chair around Dreamer’s neck and hit it with an oar (12:04)

Post match Drake goes to the back and finds a present addressed to him. He opens the card and finds a message which freaks him out to end the show. 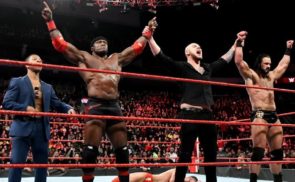 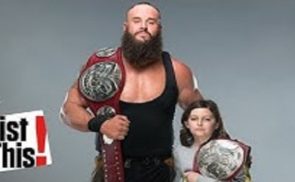 Video: 5 Superstars Who Won Their First Title In 2018