We continue on the way towards Hard To Kill, though it is going to take some time to actually get there. There are a few things going on at the moment as well, which includes the build towards Turning Point. That could mean a few different ways to go on this show so let’s get to it.

The winners get the Tag Team Title shot at Turning Point and Hikuleo is here with the Club. Bey headlocks Finlay to start and gets a grand total of nowhere. Instead Finlay takes him down and drops a knee to the chest. Robinson comes in for a slam and a backsplash crushes Bey again. Bey slips out of a delayed vertical suplex though and a distraction lets Robinson get dropped throat first across the barricade.

Back in and a legsweep takes Robinson down so El Phantasmo can hit a Lionsault. The top rope back rake wakes Robinson up a bit though and he starts firing off the snap jabs. The double tag brings in Finlay and Bey so the pace can pick up in a hurry. A running dropkick/Russian legsweep combination gets two on Bey and a modified Demolition Decapitator is good for the same. What looks like a Doomsday Device is broken up so Finlay dives onto the rest of the Club at ringside. Instead, Robinson rolls Bey up for two but Phantasmo hits a superkick to give Bey the pin and the title shot at 8:04.

Post match the Good Brothers come out and the brawl is on, including Hikuleo clearing out Doc Gallows (who is shorter for a change).

Scott D’Amore talks about Josh Alexander getting his rematch for the World Title but things are complicated. Cue Alexander, who says D’Amore won’t answer his calls. D’Amore knows Alexander is focused on Minoru Suzuki, so they can fight next week. When that is taken care of, then Alexander can go after the World Title.

We look back at Sam Beale pinning Brian Myers in a tag match on Before The Impact.

Brian Myers blames the Learning Tree for the loss. Zicky Dice keeps getting hit in the face off camera. Myers vs. Sam Beale is set for a singles match at some point.

Kaleb With A K vs. Minoru Suzuki

We see Josh Alexander watching in the back as Kaleb bails to the ropes to start. A variety of submissions send Kaleb to the ropes again but for some reason he tries slugging it out. This goes as expected and Suzuki hits the Gotch style piledriver to finish Kaleb at 1:37.

Moose isn’t worried about Eddie Edwards, Matt Cardona or W. Morrissey, who are in a #1 contenders match tonight.

Decay clears the ring before the bell but here is the IInspiration to watch on the stage. We take a break and come back with the opening bell as Lee kicks Rosemary in the head for two. Rosemary pops up to beat on Lauren and Havok comes in to add a corner splash. Everything breaks down and Rosemary spears Lauren so Havok can get the pin at 2:10.

Heath and Rhino are back together but it’s not done with Violent By Design. Rhino wants to get rid of Eric Young and they’re ready for Turning Point.

The IInspiration isn’t happy with the Undead Bridesmaids and will beat them up next week.

Chris Sabin doesn’t like Ace Austin’s “I Beat Chris Sabin” shirt and is ready to take him out at Turning Point.

Last week, Madison Rayne ranted about Mickie James so Scott D’Amore comes in to make Rayne vs. Mercedes Martinez for this week.

Martinez doesn’t like Madison running her mouth and hits an early delayed vertical suplex. Madison slips out of something though and hits a Codebreaker into a Backstabber for two. Some choking on the ropes and shoulders in the corner have Martinez in more trouble but she’s right back with a tiger driver. A short DDT connects but Madison is right back with an enziguri. There’s a Blockbuster to give Madison two more so she loads up the cutter, only to have Mercedes counter into a rollup for the pin at 5:28.

Post match Madison jumps her again and grabs a chair, only to have Mickie James make the save. With Madison gone, Mickie helps Martinez up and gets planed with an Air Raid Crash.

Steve Maclin is annoyed that he has lost twice in a row without getting pinned. Trey Miguel comes in and wants Maclin added to the X-Division Title match at Turning Point. Scott D’Amore comes in to say that Maclin can get in the title match if he beats Laredo Kid next week.

Sam Beale is ready to face Brian Myers next week because it’s time to show what he learned. Rich Swann and Willie Mack have his back but he has to do this alone next week.

Raj Singh is with Raju. They trade takedowns to start as Striker talks about how he used to be the opening match on a lot of cards back in the day. Yeah you’re still Matt Striker. Raju tries a leapfrog but gets poked in the eyes as Romero starts getting smart. Romero sends her outside and hits a running dive off the steps as we take a break.

Back with Raju chopping in the corner and Singh getting in some choking on the rope. Raju doesn’t get very far by cranking on the arm so Romero is right back with a running clothesline. The middle rope double stomp to the back gets two on Raju and a tornado DDT is good for the same. Raju takes him down and goes up top, only to miss a top rope knee. Romero’s running hurricanrana gets two and he takes Singh out for a bonus. There’s a running Sliced Bread for two more but Raju is back with the jumping knee. The running knee finishes Romero at 11:30.

Hernandez has gotten Johnny Swinger a match with the two of them against Decay and the Demon. Swinger isn’t happy, so here is John E. Bravo to offer Fallah Bahh to even things up. That’s still not enough for Swinger, but the match is on anyway.

Chelsea Green wants the Digital Media Title and now she is in a #1 contenders match.

The winner gets a title shot against Moose at Turning Point. Cardona gets knocked down in the corner to start so Morrissey shoves Edwards over the top by the throat. That leaves Cardona to get beaten up but Edwards dives back in…and right into a choke from Morrissey. There’s the double chokeslam and we take a break with Morrissey dominating.

We take a break and come back with Morrissey splashing Cardona in the corner and hammering away as Edwards is down on the floor. The neck crank goes on, followed by the fall away slam to send Cardona flying. Edwards is back in with a knee to Morrissey, who sends him flying with another fall away slam. Edwards slips out of a suplex and gets his head kicked off for messing with Morrissey’s plans.

Cardona is back in to knock both of them down and it’s finally time to double team Morrissey. That goes well for all of ten seconds before he runs both of them over in a hurry. Edwards goes up top and Morrissey follows him, setting up the Tower of Doom. There’s a double suplex to put Morrissey down and he falls out to the floor. Cardona and Edwards slug it out but stop to deal with Morrissey again. The Boston Knee Party off the apron drops Morrissey again and a running knee to the back of Cardona’s head gives Edwards the pin and the title shot at 16:25.

Result: Eddie Edwards b. W. Morrissey and Matt Cardona – Running knee to the back of Cardona’s head (16:25)

Moose is watching from behind the stage to end the show. 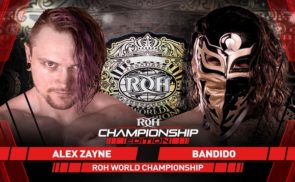