We’re still in Las Vegas and on the way to the both United We Stand and Rebellion, meaning it’s hard to say what we’re going to be seeing in the next few weeks. I’m hoping we get something fresh in the main event again like last week, as a break from the seemingly never ending World Title story was a welcome change of pace. Let’s get to it.

Opening recap and preview, this time with narration for a change.

Here are LAX and the Lucha Bros for an unsanctioned fight, meaning the Tag Team Titles aren’t on the lines. The fight is on in a hurry with a worried Konnan watching from ringside. Security is out in a hurry and the fans want to seem them fight. The Bros superkick security and manage to sneak up on LAX with a pair of chair shots. Now it’s table time but LAX gets up with a pair of spinebusters to put them through the tables instead. The champs are down and LAX pose with the titles to win this round.

The announcers tell us that there has indeed been a challenge for Full Metal Mayhem.  The usual preview ensues.

This is Scarlett’s in-ring debut. Before the match, Glenn offers Scarlett a way out of this but that’s not happening. Scarlett goes for some early rollups for two and sends Glenn outside. Back in and Glenn throws her down by the hair but misses an elbow. A Stunner to the elbow gives Scarlett a breather and a high crossbody gets two. Glenn has had it and clotheslines her head off for two. We get the Garvin Stomp as Callis is losing his mind at all of this.

GWN Flashback of the week: Lethal Consequences vs. Beer Money from Against All Odds 2009.

We recap Gail Kim attacking Tessa Blanchard, which has forced Gail to resign.

Tessa Blanchard is happy Gail is here to apologize because she has the company by the balls. Gail may be a legend but legends come and go. Diamonds are forever.

Madison Rayne is coming back.

The Lucha Bros are down for Full Metal Mayhem.

Here’s Tessa to gloat about Gail Kim’s forced apology and resignation. She talks about how it’s a night for justice so Gail needs to get out here right now. Here’s a sad Gail, with Tessa saying how bad it must be to have everything taken from you. Gail apologizes but Tessa wants to know what the apology is for. Even more defeated, Gail says she’s sorry for the attack that cost her the Knockouts Title.

Gail resigned earlier today so Tessa has an apology of her own. She’s sorry that Gail’s era is known for bra and panties matches while Tessa’s era is breaking barriers. Gail is ready to leave, but there’s one more thing: she’s out of retirement and coming for Tessa. The beatdown is on and a scared/angry Tessa bails.

We recap last week’s main event with Rich Swann retaining the X-Division Title over Sami Callihan but being attacked by the newest OVE member, Madman Fulton.

OVE….I guess you would say mentally initiates Fulton by breaking him down and getting him to think like Sami.

Grace is challenging. The fans are behind Grace as she busts out a cartwheel into a crucifix to start. Taya gets up a knee in the corner for a breather but walks into a hard shoulder for two. More strikes have Jordynne in trouble so she snaps off a German suplex to drop Taya on her head. They fight outside with Grace going head first into the post, followed a running knee in the corner for two. Taya chokes in the corner but stops to pose again, asking if the fans are entertained. A good spear gets one more on Grace and we take a break.

Back with Grace snapping off a suplex and avoiding a charge to send Taya into the post. That means a Vader Bomb for two but the Johnny Impact slide between the legs gets Taya out of trouble again. The moonsault misses but Taya is fine enough to block the Grace Driver. Taya comes up holding her ribs though and here’s Impact to help her out for the countout at 12:45.

Post match Cage comes out before Impact and Taya can escape. Killer Kross comes out to choke and post Cage as we take a break.

Joined in progress with Cage hitting a hard clothesline to get himself out of trouble but Kross posts him again. A hammerlock slam stays on Cage’s arm and a DDT on the arm makes it even worse. Cage has to block a cross armbreaker and sends Kross to the apron for the apron superplex, which is quickly countered into an arm crank over the shoulder. Back in and we hit another armbar as it’s almost all Kross so far.

Another armbreaker is blocked with a rope break and Cage manages to send him outside as we take a quick break. We come back with Kross grabbing the Krossjacket choke but getting rammed into the corner. Cage’s powerslam gets two but he can’t manage a suplex. The Doomsday Saito gets one on Cage and he’s fine enough for a powerbomb backbreaker for two of his own.

There’s an F5 for two with Impact sneaking back in to put the foot on the ropes. Taya gets in a low blow and it’s another Doomsday Saito for….three at 15:32? Cage kicked out and Kross looked stunned but the referee called for the bell anyway.

Rosemary and the still chained Allie go into the Undead Realm to end this, with Kiera Hogan sneaking in behind them. We get a song in the background as they find James Mitchell with his gang of freaks, who surround a ring. James is just setting the table for the master so Rosemary has to fight his army. We start with Luchasaurus as Rosemary pulls out a clever…and gets kicked in the face as the chained Allie stays in the corner.

Rosemary mists Luchasaurus and STABS HIM TO DEATH. Two more masked guys come in and beat her down but take too long pulling out a sword, earning themselves a nice butchering. The Undead Bridesmaids but Kiera throws Rosemary the sword and…well you get the idea. Rosemary yells at Kiera for coming as Su Yung pops up to unchain Allie.

The fight is on and Allie gets the better of Rosemary but can’t bring herself to actually stab her. Rosemary fights back and goes to stab Su but Mitchell has a clever to Kiera’s throat. The master comes in and it’s Kevin Sullivan of all people (makes sense really) to say Rosemary knows how this is going to end. All of this is for nothing because it’s never ending.

Su pops up with her Freddie Kruger razor glove but Allie shoves Rosemary out of the way and gets STABBED THROUGH THE THROAT, complete with blood. Kiera shoves Mitchell away (which I guess she could just do) and goes to hold Allie with Rosemary. Allie morphs back into her old self and says it’s ok and vanishes, leaving a furious Rosemary to end the show. 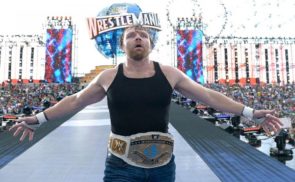 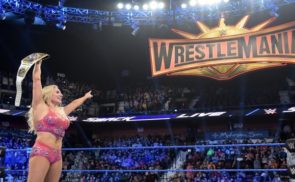