It’s title time as Rich Swann defends the X-Division Title against Sami Callihan, who is ticked off over Swann turning down the chance to join OVE. Other than that we’re likely to get some fallout from Johnny Impact turning heel last week, which is probably best for everyone. Let’s get to it.

The opening recap looks at everything going on around here, including Moose beating up the Rascalz, Jordynne Grace becoming #1 contender and the World Title situation.

Fallout from the Rascalz making fun of their clothes and not getting anywhere with Melissa Santos. Miguel goes for the legs to start and actually pulls off a hurricanrana. Moose gets sent to the floor a few times but a suicide dive won’t even put him off his feet. The second attempt is countered into a release apron bomb but Trey slips out of another one and kicks Moose in the face. Something like a 619 is countered with a swing into the steps and Moose hammers at the head inside.

A heck of a clothesline looks to set up a superplex but Moose slips out and hits a quick superkick. There’s a missile dropkick to send Moose outside for the required flip dive. Moose isn’t really phased by a frog splash but the discus lariat misses. An enziguri gives Trey two but Moose has had it and sends him into the post twice in a row. The No Jackhammer Needed spear finishes Miguel at 9:22.

Sami Callihan isn’t sure how he’s going to hurt Rich Swann but he’s walking out as champion.

Bahh shoulders Drake down to start and we go to a gator roll to keep him in trouble. KM comes in and doesn’t do as well, allowing a tag off to Eddie to crank on the arm. A superkick to the ribs cuts KM off as everything breaks down. Drake puts KM on top for a superplex but Bahh runs Drake over. That earns him a trip to the floor and a suicide dive from Eddie. That means it’s Kenny time but Eddie gets caught. That’s fine as he throws it to Drake and since the referees aren’t that bright, KM takes a shot to the head and it’s the Boston Knee Party for the pin at 4:59.

Taya Valkyrie grabs Melendez (the interviewer) by the throat for asking why Johnny Impact turned on Brian Cage last week.

GWN Flashback Moment of the Week: Jeff Hardy vs. Mr. Anderson from Against All Odds (though this might just be the international version, as the American show might have aired Fenix vs. Brian Cage from the Impact vs. Lucha Underground show last year).

Melendez gets thrown in the trash for being annoying.

Swann tells Willie Mack that he’ll be one on one with Sami tonight. Mack promises to take care of OVE but here’s Ethan Page to say he’s coming for Mack tonight.

Ace starts fast with a trip into a basement dropkick to send Hyde to the floor. A handstand on the apron makes Hyde miss and it’s the Space Flying Tiger Drop to keep Hyde in trouble. Back in and Austin hits a springboard kick to the head and a middle rope Swanton. A double stomp to the back of the head sets up the Fold for the pin at 3:08.

Video on Sami Callihan vs. Rich Swann with Swann turning down the offers to join OVE and laying all of them out.

A Knockout is back in two weeks.

Here are Johnny Impact and Taya Valkyrie for the big explanation with Callis ripping them apart on commentary. Johnny has been asked by everyone from local news to TMZ. He did it because of the internet smart marks who are watching this stuff for the crashes. They liked him and then they saw Cage, who got ripped off at Homecoming. Impact had to sit in a room with that moron who just doesn’t get it. How can Impact be loyal to the fans when no one is loyal to him? He cheated on the fans with himself and loved it.

As for Taya, she’s not worried about facing Jordynne Grace next week but would rather complain about how the fans treated Johnny. There might not be a title match next week because they have the power and they make the rules. Johnny says the only things that matter to him are the title and his wife.

Rosemary comes in to see James Mitchell because she’s gotten Allie’s meat suit and not her soul. Mitchell says he was a man of his word but if Rosemary has a problem, she can talk to him, whoever that is. She’ll go to the undead realm and get the Bunny’s soul back.

Page jumps him in the corner to start and sends Mack into another corner for an elbow to the face. That just earns Page a Samoan drop into a standing moonsault and they head outside. Page kicks him in the face for two back inside as the fans are behind Chocolate Thunder. That switches to an ETHAN SUCKS chant so he puts on a chinlock and shouts about how the chants mean nothing.

Mack fights up with a shotgun dropkick into the corner for the running hip attack. A DDT gets two but Mack gets caught with an Iconoclasm out of the corner, setting up a middle rope elbow for another near fall. Mack finally goes simple by kicking Page in the head and hitting the Stunner for the pin at 5:59.

Melendez annoys Johnny and Taya again so Johnny says he smells like hot garbage. They run into Killer Kross, who whispers something to him, which seems to please Johnny.

Melendez goes up to Gilbertti, who is doing shots to train. The match with Scarlett is going to be one star, after six stars for Glenn and negative five for hers, making it the highest rated match ever involving a woman.

Gail Kim is going to apologize and resign from her position to appease Tessa’s lawyers.

LAX and the Lucha Bros get in a rather intense fight in the hallway. Konnan comes in to yell as security breaks it up.

The Crist Brothers jump Mack in a locker room…but he’s ready for them and lays them out with a chair.

Sami is challenging and doesn’t seem to know that the Brothers aren’t a factor. Swann isn’t wasting time and goes straight at Sami, knocking him tot he floor for a big flip dive. That earns him the spit chop but Swann isn’t about to be dropped on the steps. The piledriver on the steps is broken up and Swann hits a running clothesline off said steps. An exploder suplex onto the ramp cuts the champ off though and we take a break.

Back with Swann caught in a chinlock, followed by another spit chop in the corner. The neck crank goes on and Callihan pulls on the mouth for a painful visual. That’s let go for an elbow and it’s right back to the chinlock. Swann fights up and gets in a jawbreaker, followed by a running headscissors. A top rope hurricanrana gives Swann two and he can’t believe the kickout. Callihan pops up with a piledriver into a knee to the face into Get Out Of Here for two and his own surprised reaction.

Swann gets the better of an exchange of kicks to the head, setting up the middle rope 450 for two. A super hurricanrana is countered into a super Jackknife, followed by an STF of all things. Swann breaks that up and makes the rope, setting up a huge spit in the face from Sami. That earns Callihan a Lethal Injection but he avoids the Phoenix splash. Swann is fine enough to grab a rollup to retain at 15:03.

Post match Sami knocks Swann down and grabs a chair, only to get kicked in the face. Cue the debuting Madman (Sawyer) Fulton to chokeslam Swann. Mack comes in for the save and gets dropped as well, allowing Sami to hit Swann in the throat with the baseball bat to end the show. 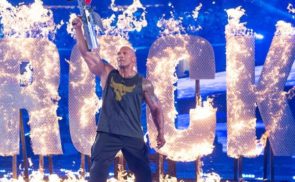