We’re still in Atlanta and tonight we get to find out who will be the twelve men in the BFG Series. We’ve already found out three of them but tonight the field will be completely revealed. Other than that we’re likely to hear more about Brooke Hogan not letting her dad hit Bully with a hammer last week. Let’s get to it.

After a recap of the events of last week, here’s Hulk to open the show. He talks about how awesome it is to be in Atlanta before talking about nearly murdering Bully Ray last week. It was such a horrible moment last week that only an act of God kept him from doing something very bad. He’s even asked Brooke Hogan to stay home tonight because of how intense things have been.

As for tonight, it’s the BFG Series Selection Show. Three people (Joe, Jay Bradley and Hernandez) are already in and we’ll add the previous two winners (Hardy and Roode) to the field as well. Hogan brings out Jeff Hardy who says he’s so tired of hammers that he’s going to win the BFG Series and then beat Ray for the world title in San Diego.

This brings out Bobby Roode to talk about being the longest reigning champion in Impact Wrestling history and how he’s going to win his second BFG Series to win the world title back. Hogan says that next week is Open Fight Night and the fans get to vote for which of these two get to pick which of these two get to make the first call out. Roode says he’s going to call out Hardy next week but Hardy wants to go right now.

Instead here are Aces and 8’s with something to say. Ray wants to know why any of this matters, because no matter who goes on to Bound For Glory because they get to lose to him. Hogan wants to know why the bikers aren’t in the Series and Ray says that’s just fine. Ray sends in Bischoff and Brisco to fight Hardy and Roode which goes about as well as you would expect. Roode jumps Hardy from behind and bails before he catches a beating.

Bad Influence is ready for the tag team qualifying match tonight and make fun of Storm for having yet another partner. Daniels plays the piano and that’s about it.

Both members of the winning team qualify. Storm suplexes Daniels down to start and drops a knee for two. Off to Gunner vs. Kaz with the tattooed man throwing Kaz around with ease. Daniels finally starts cheating to take Gunner down, allowing Kaz to hit a springboard legdrop to the back of the head for two. Bad Influence hits a few kicks to the chest but Gunner runs them both over with a double clothesline.

Back to Storm who gets two on Kaz off an Alabama Slam as everything breaks down. Gunner is sent to the floor but Storm hits a Backstabber on Daniels and Closing Time on Kaz. With everything going nuts, Kaz distracts the referee so Daniels can blast Storm in the head with a title belt, giving Kazarian the pin at 4:26.

Crimson is back with a modified look. He won’t say what he’s doing here for the first time in 12 months.

Velvet has a present for Mickie James inside an envelope.

Here’s Crimson to talk about being undefeated for 470 days and then being gone for 12 months. Tonight he can get into the BFG Series and all he has to do is beat Joseph Park.

Crimson runs Park over with some clotheslines for two before we hit the cravate. Some knees to Park’s face set up a neckbreaker for no cover as Crimson is bragging a bit too much. Park is sent into the corner but Crimson misses a charge, allowing Park to roll him up for the pin at 2:40.

Mickie is ready for Velvet.

Here’s velvet to clear the air with Mickie. She calls out the champion and hands her the contents of the envelope: medical clearance for the rematch. Mickie says that the release is dated yesterday but Velvet’s knee is hurt today, so Mickie attacks the knee and puts it in a leg lock until referees make the save.

One fall to a finish. Morgan and King start but King immediately tags out to Terry. King distracts Terry so Morgan can take over with the Nash choke in the corner. A big boot to the head puts Terry down but King tags himself in. King hits a springboard ax handle to Terry’s back but the big man launches King into the air and down to the mat. Off to Magnus who takes down the two big guys and drops King with a brainbuster. The top rope elbow gets two on King as Morgan makes the save and everything breaks down. Morgan kicks Terry in the face but Magnus hits a Michinoku Driver on King for the pin at 4:50.

Eric Young is going to sneak into the BFG Series by beating Aries. His first step: using the rest room.

Here’s Sting for the first time since Slammiversary. He talks about the great deception by Bully Ray setting up Sting’s one title shot at Slammiversary. Sting failed there because he couldn’t survive the waves of Aces and 8’s that Ray threw at him. While Sting was fighting them off, no one came out to help him but that’s ok. Sting says Aces and 8’s are just like family. He repeats the word family and says that he has to go to a place that he never thought he’d have to go again. Sting has to create a family that he can trust: the new Main Event Mafia.

Video on Eric Young’s fishing show and a brief reunion with ODB.

Aries immediately takes Eric to the mat and rides him around before heading to the corner for some bragging. ODB comes in and is ridden to the mat by Eric before we get back to some actual wrestling. Aries rakes the eyes to take over and chokes on the ropes before hooking a quick chinlock.

They trade loud chops and Young pounds away before being sent to the apron for a Flair strut. Young slides back in and sends Aries to the apron as well, but Austin’s Flair strut is broken up by a forearm. A big dive to the floor takes Aries down but kissing ODB takes too long and Aries dropkicks Young in the corner. The brainbuster finishes Young at 6:15.

Aces and 8’s tell Doc to chill about not getting the BFG Series spot.

It’s every member of Aces and 8’s but it’s a Fingerpoke of Doom match. Anderson “shoot” Brisco out, Hogan points Bischoff out, tricks Knux into looking away and actually fingerpokes him out, and tells D-Von to get the tables from the floor. Doc is the only one left but he will have none of the stepping aside. He goes after Anderson but eventually gets tossed out anyway at 4:00 so Anderson can win. No rating but it was storyline development instead of a match.

Rampage Jackson comes up to Angle in the back to ask what he meant last week. Angle said he just meant that Rampage can’t jump to the top overnight and everything seems cool.

Doc is yelled at in the back by the rest of the team until Ray yells at Anderson and Doc for screwing up the plan. Doc says he was just stepping up which Ray respects, but Doc broke the plan. Everything seems to be cool but Doc wants to make sure AJ Styles doesn’t make it into the BFG Series. Ray says get the job done.

Angle takes it to the corner to start but AJ pops him in the jaw with a dropkick. A backbreaker and suplex put Angle down as we take a break. Back with AJ knocking Angle to the floor and hitting a baseball slide to send him into the announce table. AJ misses a big dive and gets caught in a sweet overhead belly to belly suplex to put him down on the floor. Back inside and AJ clotheslines him down but gets caught in a release German suplex. Angle can’t follow up and gets caught by a springboard forearm for two. Kurt comes right back with Rolling Germans, only to have AJ counter the Angle Slam into a DDT for two.

AJ misses a splash in the corner and gets caught in the Angle Slam for two. The ankle lock is countered into the Calf Killer which is countered into the ankle lock which is rolled through by AJ. Styles goes up for a moonsault but Angle runs the ropes for a belly to back superplex. AJ lands on his feet and hits a DDT into the corner to knock Angle silly. Cue Doc and Knux to go after AJ but it’s Angle who takes the shot. That and an Anderson distraction allows AJ to roll up Kurt for the pin at 15:37.

Aces and 8’s beat Angle down post match until Rampage Jackson makes the save to end the show. 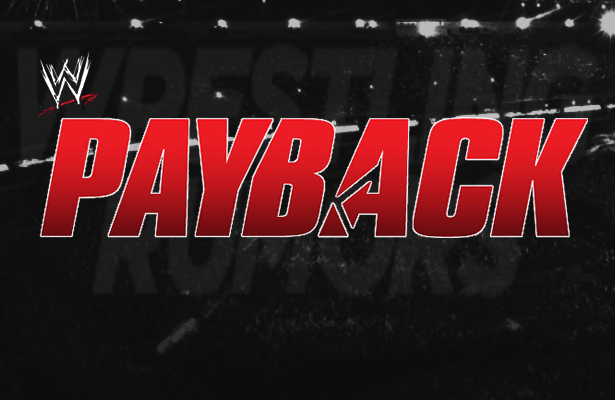