It’s the go home show for Hard To Kill and that means we are going to be seeing the AEW people showing up again. There are a few other things to cover on the way there, but unfortunately that means we are likely to have more of the continuing adventures of Eric Young and Tommy Dreamer. Let’s get to it.

Opening recap, including a look at the end of last week’s AEW Dynamite.

Rosemary and Deonna Purrazzo are here too. Lee wastes no time in sending her into the corner and chopping away but Taya is back with a double leg takedown. Some chops in the corner have Lee out the floor but she is able to block the suicide dive. Back in and the full nelson with the legs has Taya in more trouble, followed by the chinlock. Lee cuts off a comeback attempt but a Swanton hits raised knees.

Taya makes the clothesline comeback and gets two off a shoulder block. A curb stomp doesn’t have much effect on Lee but the running knees in the corner work a bit better. Deonna puts Lee’s hand on the ropes for the break so Rosemary grabs her by the hair. Cue Susan to beat up Rosemary, with the distraction letting Lee roll Taya up for the pin at 9:13.

We go to Kenny Omega’s bus where Don Callis tells the team that they need a win tonight. It is time for Karl Anderson to beat Rich Swann and everyone is cool.

Tony Khan and Tony Schiavone have a new paid announcement, with Khan praising Impact for all of its good things in 2020. They had these ads, Kenny Omega and getting to hear about AEW! We run down tomorrow’s Dynamite card but Khan isn’t sure that the Good Brothers are actual brothers.

It’s a brawl to start with Suicide being sent to the floor. Manik doesn’t have time for the double teaming as Suicide comes back in with stereo backdrops putting Bey and Raju on the floor. Manik and Suicide both head underneath the ring, come back out from the same side, and hit stereo dropkicks to put the villains on the floor.

We take a break and come back with Manik and Suicide hanging in the ropes but getting knocked outside for their efforts. Things settle down to Suicide in trouble in the corner with Raju elbowing him in the mask for two. A belly to back suplex gives Bey two but Suicide reverses into a crucifix for the same.

Suicide manages to suplex him into the corner and rolls over for the hot tag to Manik (dang I miss crowd pops) to clean house. Suicide gets the Octopus on Bey while Manik stretches Raju’s abdominals. Both holds are broken up in a hurry so Raju goes for Manik’s mask. That doesn’t work out so Bey hits the Art of Finesse for the pin on Suicide at 12:42.

Taya Valkyrie yells at Rosemary over Susan, with Rosemary saying they will have this on Saturday. Valkyrie needs to get ready for her title match.

Eric Young, Joe Doering, Rhino and Cousin Jake are all here too. Deaner goes for the head to start and unloads in the corner until Dreamer avoids a charge. A slam drops Deaner but Doering…..I think misses a trip but Dreamer goes down anyway. Something misses again, as Dreamer just lays there on his side watching as Deaner gets up and is (very eventually) tripped by Rhino.

It earns the double ejection for Rhino/Doering and Deaner unloads in the corner, setting up the neck crank. The Bionic Elbow is broken up and so is the Deaner DDT, but Dreamer gets knocked down anyway. Dreamer gets the boot up but Deaner slaps Jack, who jumps him for the DQ at 3:36.

Scott D’Amore officiates the contract signing between Havok/Neveah and Tasha Steelz/Kiera Hogan. Steelz and Hogan talk trash so Havok and Nevaeh grab them by their throats to shut them up.

Brian Myers asks Scott D’Amore about his next big match and lists off the people he has defeated. Josh Alexander comes up to say Myers won by DQ so D’Amore makes a No DQ match.

Kaleb With A K handles Dashwood’s entrance. Dashwood offers a handshake, which Josh transitions into a plug for Micro Brawlers. Rosemary doesn’t like the attempted cheap shot and knocks Dashwood down in a hurry. Kaleb offers a distraction and gets grabbed by the head, allowing him to use hairspray on Rosemary’s eyes. Tenille hammers away and hits the running crossbody in the corner for two.

Back up and they collide for the double knockdown, followed by Rosemary’s Sling Blade. The Upside Down has Dashwood in even more trouble but she’s right back with a butterfly suplex of all things for two. Rosemary gets in another shot so Kaleb offers a distraction. Cue Crazzy Steve to chase him off and take him down, leaving Rosemary to hit a spear for the pin at 8:12.

Rich Swann is ready for Karl Anderson because tonight it is one on one with everyone else banned from ringside. Then Karl can go back to the bus and say they’re going to get beaten up on Saturday.

Video on Ethan Page going a bit scooters and winding up setting up a match against Karate Man (himself) at Hard To Kill.

Non-title and no time limit this time. Palmer hits four straight running dropkicks in the corner to start but Moose shrugs them off and drops him with a forearm. A big forearm to the back keeps Palmer down. Palmer gets in a shot to the ribs and a middle rope knee to the face. A chokeslam plants Palmer and Moose elbows him out at 3:28.

Video on Kenny Omega being awesome. The other five people in the six man are ok too.

Swann is defending and no one is at ringside. We’re joined in progress with Swann armdragging him into an armbar as the other four are seen watching from backstage. Anderson fights up and chokes in the corner, setting up his own armbar. The shoulder goes into the post and we take a break.

Back with Swann’s arm being draped over the top rope again, setting up another armbar. Swann fights up with a clothesline and some snap jabs, followed by a running kick to the back of the head. A missed charge lets Anderson hit a big boot for two but Swann rolls him up for the fast pin at 14:03.

We cut to the bus and see an empty sofa. That means Omega and Gallows can jump the Machine Guns in the back, with Swann and Anderson joining in. The big brawl is on to end the show.

Well almost as we get a quick preview for the pay per view to really end things. 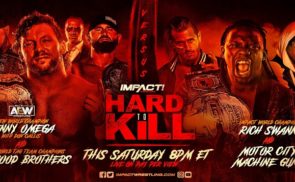