We’re back to the future this week with the regular show after the awesome special edition last week. It’s more of the build towards Hard To Kill and two weeks ago saw Tessa Blanchard win a gauntlet match to become #1 contender to the World Title. Things need to start getting back to normal around here and I’m not sure if that’s a good thing. Let’s get to it.

We open with a recap of the gauntlet match, with Rich Swann getting some earned screen time.

Michael Elgin is going to let off some steam after getting disqualified last week.

They fight over a wristlock to start until Cage headlock takeovers him down. Cage runs Eddie into the corner with ease but gets sidestepped out to the floor. The hurricanrana off the apron is countered into a powerbomb which is countered into the hurricanrana into the barricade. Back in and Cage snaps off a belly to belly to take over again and Eddie’s back is bent over Cage’s knee.

Eddie is fine enough to counter a suplex into one of his own to take over. Some chops in the corner rock Cage and another hurricanrana keeps him down. The Blue Thunder Bomb gets two but Eddie is banged up too. Something close to an AA gives Cage two and we hit that Terminator clap. Eddie kicks him in the head but gets clotheslined down for a double knockdown. And never mind as here’s Michael Elgin to clothesline them both down for the double DQ at 8:40.

Post match Elgin stomps both of them down but we have something new.

Elgin gets double teamed to start but Eddie sends both monsters to the floor for a suicide dive. Not to be outdone, Cage is right back with his own no hands flip dive to take both of them down. Back in and it’s time to trade shots to the face, including a series of superkicks, to put everyone down again. Elgin slips out of Cage’s suplex and plants Eddie before dropkicking him out to the floor.

Cage is knocked outside as well and it’s a big spinning flip dive to take out Cage and Edwards as we take a break. Back with a Tower of Doom being broken up so Eddie settles for a Backpack Stunner for two on Cage. Elgin isn’t about to get caught in a half crab so it’s Cage back up to deck both of them. Edwards gets planted for two and it’s time for a short breather. It’s Elgin back up with a dragon suplex to Cage and running clotheslines in the corner.

A Falcon Arrow gets two on Cage but he’s right back with the sitout Alabama Slam for the same on Elgin. Cage runs into the Boston Knee Party and a tiger bomb to give Eddie two and he’s rather surprised by the kickout. Elgin takes a running knee to the back of the head but Cage clotheslines Eddie for a three way knockdown. Cage gets crotched on top though and it’s a Boston Knee party on the ropes for a bit knockdown. Elgin no sells a German suplex though and the Elgin Bomb to Eddie is good for the pin at 15:18.

The Rascalz are in the clubhouse and Trey Miguel does not like Ace Austin hitting on his mom. Cue mom, with Trey asking her to stay out of the arena. Moms don’t go to work you see. She’s down with that and promises meatloaf. The rest of the team goes with her.

Moose plays basketball and puts one of the players through the hoop.

Josh Matthews brings ODB to the ring, as the company is trying to do something for her after her food truck was destroyed. She has been making her living with the truck for years now but then it caught on fire and everything had to be started over again. Her insurance company isn’t paying anything for some reason but she has a home here in Impact.

Cue Taya Valkyrie and John E. Bravo to mockingly welcome her back. Yes ODB is a four time Knockouts Champion but Taya is the greatest Knockout of all time and this is her show. She spends more on spilled drinks than ODB spends on barbecue sauce all year. Taya plugs the Indiegogo campaign and tells ODB to get out of here. The fight is on but Bravo saves Taya from the beating.

We go to a press conference for the official announcement of Blanchard vs. Callihan. Blanchard says she’s a professional and will put Callihan down. Callihan doesn’t like her because she’s a spoiled brat. He’s been doing this for fifteen years and she has had everything handed to her. At Hard To Kill, it’s another title defense on the resume and he’s “cracking her f****** skull.”

Mama Miguel is in the crowd. Trey goes with rapid fire punches on Thornstowe to start and snaps off the hurricanrana to send him into the corner. Austin comes in and tries a playing card but Trey scares him to the floor in a hurry. Thornstowe comes back in and gets hit with a series of flips and dives from the Rascalz with Luster having to make a save. Luster plants Dez with a suplex and Thrownstowe adds a standing moonsault for two more.

Austin even gets to taunt Trey a bit but Dez gets in a kick to the face and the diving tag brings Trey in. Everything breaks down and it’s a series of strikes to crush Austin. Wentz dives onto Luster and Trey dives onto everyone else. Hold on though as Austin goes to hit on Mama Miguel, meaning it’s a tackle from Miguel himself. The distraction lets Thornstowe roll Wentz up with trunks for the pin at 8:38.

ODB isn’t worried about wrecking Taya tonight but will leave Jordynne Grace a piece. Grace gives her money and leaves.

Johnny Swinger rants to Joey Ryan about how the young guys are ruining everything. He suggests a kliq and Ryan….actually agrees. They’ll use hand signals to cheat tonight.

Here are Rob Van Dam and Katie Forbes for a chat. Katie shakes a lot and introduces him as the sexiest man in the world. Rob knows he needs to explain a few things but no one would get it because no one knows what it’s like to have everyone want to be him. How many people do they cheer for when they steal his moves?

Cue Tommy Dreamer (Callis: “Dreamer just can’t help himself.”) to say Rob and Rhino should fight next week, like we used to here in Queens. Rob isn’t sold and wants to know why Dreamer can’t stop living in the past. Van Dam has his girlfriend (and his girlfriend’s girlfriend) to take care of so he’s ready to go. Cue Rhino to go after Rob but the referees break it u.

We look at Rich Swann in the gauntlet match again.

Willie Mack is proud of Swann but Rich admits that it was Tessa’s night. Now they want the Tag Team Titles so here are the North to mockingly applaud Swann. Rich and Willie are ready to win the Tag Team Open next week and get the titles at Hard To Kill.

Flashback Moment of the Week: ODB beats Mickie James to win the Knockouts Title in 2013.

Swinger offers a handshake but Petey catches the cheap shot to the ribs. Petey snaps off a headscissors and hits a dropkick to the back to put Swinger on the floor. Back in and Swinger hammers away before dropping a headbutt to the lower abdomen. The elbows miss though and Petey hits the slingshot Codebreaker. That’s enough for Swinger to call for Ryan to help him but instead he has to flip out of the Canadian Destroyer attempt. The Swinger Neckbreaker is countered into the Sharpshooter to give Petey the fast win at 3:17.

Non-title and ODB uses the chest to shove Taya around. Some shoulders put Taya down but John E. Bravo takes away ODB’s flask. Actually Johnny takes a shot of his own…and gets his face pulled into ODB’s chest. The distraction lets Taya get in a shot to the leg and a running knee to the head gets two.

ODB misses a running charge in the corner and there’s the Stinkface for a bonus. Something close to an STF sends ODB over to the ropes and it’s time for some choking. ODB bites her face though and sits up top for the Dirty Dozen. The Bronco Buster hits but Bravo wants a shot from the flask. He and ODB share a drink but Taya gets in a cheap shot. Cue Grace to grab the title, allowing ODB to get a rollup and the pin on Taya at 10:14.

Switch Em Up! Daniel Bryan Was Removed From Tables, Ladders And Chairs By…..Daniel Bryan? Why Would He Do That? 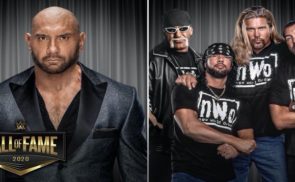