We’re back after last week’s Wrestle House special, meaning that it’s time to start getting ready for Hard To Kill. For once that’s a major pay per view, which is quite different from all of the smaller monthly shows they have been running as of late. I’m actually curious to see where they go so let’s get to it.

Here is Matt Cardona for a chat. He talks about how great of a show Turning Point was and how he had W. Morrissey beaten, but there was no referee. Then Moose speared him so Morrissey could win, and that’s because Moose knows what Cardona is. Cue Moose to say Cardona has accomplished a lot in eighteen years. Cardona has a podcast and a room full of action figures, plus a big house with a beautiful wife.

The problem is he’ll never be that guy, but he wants a match with Moose? That’s fine, because it would last as long as his Intercontinental Title run. They should just call him Midcardona, which is enough to start the brawl. Cardona knocks him down in the corner but here’s W. Morrissey to take Cardona out. Cue Eddie Edwards for the real save and we probably have a main event.

Violent By Design brags about their win at Turning Point and now they want the Tag Team Titles back.

Matt Cardona comes up to Scott D’Amore in the back and the tag match is made tonight. Cardona might even be able to earn a World Title shot. Cardona is happy and leaves, with Jordynne Grace and Rachel Ellering coming in instead. There is going to be a Knockouts Ultimate X match at Hard To Kill so here are Tasha Steelz and Savannah Evans to talk trash. D’Amore makes Evans vs. Ellering for later tonight.

Deonna Purrazzo joins commentary and says she would rather die than wear a Sabin shirt. They fight over arm control to start until Sabin hits an armdrag and Striker refers to Purrazzo as “D”. Purrazzo is not pleased as we go to a break and come back with Rehwoldt choking away in the corner. A pendulum elbow hits Sabin and Rehwoldt grabs the chinlock.

Back up and Sabin sends him outside for a breather, meaning the comeback can be on. A running boot in the corner sets up a tornado DDT for two on Rehwoldt but they clothesline each other. Purrazzo gets up on the apron for a distraction, allowing Rehwoldt to hit End Scene for two. Cue Mickie James to go after Purrazzo as the Cradle Shock finishes Rehwoldt at 11:25.

Scott D’Amore explains the Ultimate X Knockouts match to Chelsea Green. She leaves, so here is Alisha Edwards to get the same explanation. With Edwards gone, Jay Vidal comes up, asking for an opportunity. D’Amore obliges.

Jonah runs him over, tosses him around, and finishes with the top rope splash at 1:49.

Post match, Jonah says he wants to talk about Josh Alexander. Everyone talks about how Alexander is the best in the world, but to be that, you have to go through the top dog.

Miguel is talking about retaining the title when Maclin jumps him from behind to start the brawl. A referee breaks it up so Maclin hits Miguel with the belt and chokes him with a rope. Security breaks it up but Miguel climbs a ladder for the big flip dive.

Moose can’t convince W. Morrissey to help him with Matt Cardona as Morrissey isn’t buying the title shot carrot. Moose says Morrissey can have the next shot so Morrissey says ok.

Jordynne Grace and Tasha Steelz are here too. Evans stomps away to start but Ellering kicks her way out of the corner. Back up and Evans hammers away again, setting up a running shoulder in the corner. An STO sets up a spinning middle rope legdrop but Evans grabs the leg on the way down, which shows some good power. A DDT gives Evans two but Ellering elbows and kicks her in the face. Three straight backsplashes gives Ellering two but she has to deal with Steelz. That matters for all of two seconds as Ellering TKOs Evans for the pin at 6:54.

Tenille Dashwood is back and gets the recap from Madison Rayne. Post break, they run into the IInspiration, who are putting on each others’ lip gloss. Squealing ensues, but Rayne isn’t happy that they know Kaleb With A K.

Swann kicks at Doering’s leg to little avail so it’s Mack coming in for a running corner clothesline to Deaner. The legdrop/splash combination gets two, followed by a flapjack/bulldog combination. Doering has had it with this though and comes in with a cheap shot to take over as we go to a break. Back with Doering kicking Mack in the head and hitting a side slam.

Deaner adds a Swan Dive headbutt for two but a pop up right hand gets Mack out of trouble. Striker: “Deaner in trouble! The outstretched tree trunk of Joe Doering is his only reprieve!” And that’s why people think Striker talks funny. Mack gets over for the hot tag off to Swann so house can be cleaned. An Eric Young distraction lets Deaner crotch Swann on top for a breather. Mack takes out Deaner in a hurry though and the 450 gives Swann the pin at 9:21.

Post match Mack and Swann get beaten down until Rhino and Heath make the save.

Hernandez is happy that Johnny Swinger is happy, so here are Raj Singh/Rohit Raju to brag. Lawrence D. comes in and doesn’t like them, with a match being made for next week.

Cardona starts for the team but Moose tags out at the bell. The threat of a double clothesline sends Cardona and Edwards bailing to the floor but they slide back in to drop Moose. We take a break and come back with Moose kicking Cardona down in the corner. Cardona gets over to Edwards for the tag and strikes away at Morrissey to pick up the pace. Morrissey knocks Edwards off the top though and it’s Moose taking over back inside.

Edwards avoids a charge though and Moose is sent outside, where he takes out Cardona to break up the hot tag attempt. Back in and Edwards hits a jawbreaker, allowing the tag back to Cardona. Everything breaks down and a series of kicks put all four of them down. Moose and Cardona slug it out and Eddie low bridges Morrissey to the floor for the suicide dive. A Rock Bottom gives Moose two on Cardona but another attempt is countered into a cradle to give Cardona the fast pin at 10:46.

Post match Morrissey lays out Moose to end the show. 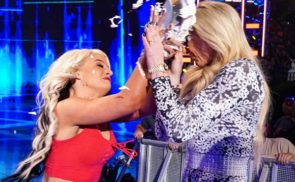 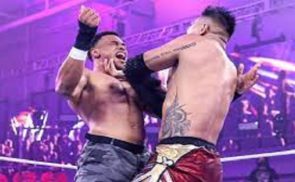