So now that we know who shot the manager (yes the manager), it is now time to move towards Hard To Kill, meaning there are some stories that need to be set up. Last week’s show ended with Sami Callihan and Ken Shamrock being move evil than usual and we also have the Knockouts Tag Team Titles tournament. We could use something a little better than that so let’s get to it.

In Memory of Bob Ryder.

XXL jumps them to start but get low bridged to the floor for a dive from Sabin. Back in and we settle down to Sabin hammering on Larry, as Madison  asks why Larry isn’t in jail after he admitted to shooting John E. Bravo. Acey comes in to slam Sabin but everything breaks down with the Guns kicking both of them down. A double shoulder drops Shelley though and it’s time to stomp away again. Larry gets two off a low superkick but Sabin comes in for the save sans tag. The standing Sliced Bread allows the tag to Sabin so house can be cleaned in a hurry.

Sabin gets driven into the corner though and it’s a backbreaker/running elbow combination for two. Everything breaks down and Larry misses a top rope splash, meaning it’s time for the superkicks. Acey gets knocked to the floor and some running kicks in the corner rock Larry. Skull And Bones finishes Larry at 9:23.

John E. Bravo yells at XXXL, screaming that Larry D. should be in jail. Tommy Dreamer, now in a police shirt, comes in to say he’s going to arrest Larry. Since this is ridiculous, Larry asks about Dreamer’s authority. Dreamer pulls out….nothing actually, with Larry pointing out that he isn’t holding a badge. That doesn’t matter, because Dreamer wasn’t a real judge or lawyer but he knows Larry shot Bravo. Larry says he was set up so Dreamer wants to go downtown to straighten things out. A right hand drops Dreamer and XXXL leaves, with Bravo coming in to scream over Dreamer’s unconscious body.

Jazz, now bald, and Renee (Drake Maverick’s wife) are making their debuts. Grace headlocks Kelly down to start so Kelly does the same for a standoff. It’s off to Michelle vs. Jazz, with the latter taking her down without much effort. Grace comes back in for a double shoulder to Michelle, who manages to send Grace to the apron. We take a break and come back with Michelle chinlocking Grace.

Kelly comes in to kick Grace in the chest but Grace powers her way out of another choke. The hot tag brings in Jazz to take over on Kelly before handing it right back to Grace. Kelly hits a running dropkick in the corner but can’t get Grace in a fireman’s carry. The Grace Driver connects with Michelle having to make a save. Everything breaks down and the Jazz Stinger finishes Michelle at 12:23.

Flashback Moment of the Week: the Motor City Machine Guns retain the Tag Team Titles over Generation Me (Young Bucks) at Final Resolution 2010.

Ethan Page knows everyone saw him lose to Swoggle last week but he has a plan to fix it all. As for Karl Anderson, why does he think it was Page who took out Doc Gallows? Well he did, so Anderson can face Page at Final Resolution. If Page wins, the North can have a title shot. Josh Alexander spends the entire time looking at Page like he has lost his mind.

A nervous Alisha doesn’t seem to care about Tenille Dashwood’s plans for them…because she needs to jump onto Sami Callihan’s back and choke him as hard as she can. Security breaks it up but Sami blows her a kiss.

Cody clotheslines him out of the corner as commentary goes over everything Tommy Dreamer does around here. Cue Eric Young and Joe Doering to jump Cousin Jake and then Cody for the DQ at 47 seconds.

Post match we get the big on Swinger and the Deaners.  Young says they own the world.

Deonna Purrazzo and Kimber Lee come up to James Mitchell to ask if he has turned Su Yung into Susie yet. It isn’t that easy so the women offer to get Yung in the ring.

The Deaners rant about Young and Doering because Cody was there to drive Young around when he started wrestling. Next week, Cody is proving he isn’t a nobody. Good luck with that kind of acting performance.

Here are Deonna Purrazzo and Kimber Lee for a chat. Purrazzo says Su Yung can get her rematch right now so here’s Yung….and here’s James Mitchell as Lee and Purrazzo bail. Mitchell talks about how Yung has been a thorn in his side for too long so it’s time to pay. Cue the Bridesmaids so Purrazzo and Lee jump Yung from behind. Yung loads up the mist but Purrazzo hits her in the throat in a smart move. Cosa Nostra knocks Yung out and the Bridesmaids take her away. I liked it.

Moose comes up to Chris Bey in the back and wishes him luck against Swann. Bey says he knows what’s going on here: Moose is nice to him now and gets the first World Title shot. Moose says not quite, because he just hurts people. You take power instead of giving it and when Moose wants the title, he’s taking it too.

Karl Anderson says Ethan Page is on for Final Resolution.

Steve is challenging and needs to put his stuffed monkey on the post to start. Raju jumps him from behind and gets punched out to the floor for his efforts. Back in and Steve tries a full nelson before twisting Raju’s neck around. A figure four necklock over the ropes has Raju in trouble but he’s right back with a jumping Downward Spiral.

We take a break and come back with Raju biting Steve’s head in the corner, followed by a fisherman’s suplex for two. Raju hammers away and gets two more off a snap suplex. The armbar doesn’t last long so Raju kicks him down instead. Steve gets in a shot to the face though and a high crossbody gets two. Raju is back with a jumping knee to the face but Steve pulls him down into an Octopus on the mat. The feet in the ropes are good for the break so Steve tries a sunset flip. Raju sits down on it though and grabs the rope to retain at 11:41.

Tasha Steelz and Kiera Hogan are looking forward to winning the Tag Team Titles and having all the money. Fallah Bahh comes in to say they stole the money and he has seen the video from last week. The women say they don’t have the money and hide it behind their backs, while saying they’ll have it next week. Bahh leaves and Johnny Swinger comes up to proposition them. It doesn’t go well.

Brian Myers comes up to mock Crazzy Steve and TJP for their plan not working. TJP challenges Myers and it’s accepted for some point in the future.

We even get a Lucha Underground reference during Mack’s entrance. Bey slaps him in the face so Mack does the same, setting up a nipple twist in the corner. The Thesz press into the right hands keep Bey in trouble but Mack gets sent outside. That’s fine with Mack, who drops him back first onto the apron. Bey knocks him off the apron to tweak the knee though and we take a break.

Back with Bey cranking on said knee and chop blocking him down to cut off the comeback attempt. The half crab doesn’t last long as Mack gets up and blasts him with a clothesline. The swinging slam connects but Mack’s knee is barely holding up. A knee drop gets two on Bey, even though it bangs up Mack’s knee even more. Bey takes out the knee again though and slaps Mack in the face. That just earns him the Stunner to give Mack the pin at 12:57.

Post match Moose comes in to jump Mack but Rich Swann makes the save. Bey uses the distraction to take Swann down though and poses to end the show. 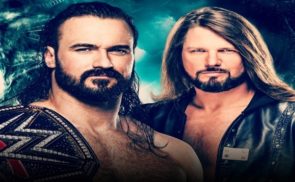 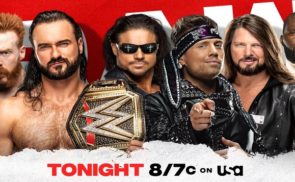