We’re down in Mexico for the first time in a long time and that means things could go in a variety of ways. One of those ways will probably include a lot of Mexican talents who may or may not be familiar, which doesn’t tend to be the most successful idea. Then again you never know how this show is going to go anyway, but maybe we can get away from Tommy Dreamer for a week. Let’s get to it.

TJP vs. Golden Magic vs. Trey Miguel vs. Taurus

It’s a brawl to start as commentary makes it sound like this is a tag match. Magic wastes no time in sending Taurus outside for an Asai moonsault, leaving Trey to hide from TJP in the ropes. TJP’s anklescissors doesn’t work so he offers a handshake but stops to dab instead. Magic comes back in with superkicks and cutters to TJP and Miguel but Taurus comes back in for the save. Taurus starts throwing people into each other until TJP makes a save of his own. That means the wristdrag/anklescissors combination to Taurus and Magic as TJP gets to clean house.

Taurus suplexes TJP and Magic at the same time so Trey is back in with a Pele. A neckbreaker to TJP makes TJP DDT Taurus at the same time but Magic hits a kind of spinning Big Ending for two on Trey. Taurus is back up with a torture rack into a backbreaker on Magic but TJP hits him with a tornado DDT. Trey gives TJP a Cheeky Nandos kick into a 619, only to miss a Meteora. TJP hits the Detonation kick on Miguel and kneebars Taurus, only to have Magic hit a 450 to pin Miguel at 8:57.

Post match TJP and Magic glare at each other.

Kiera Hogan yells at a masked luchadora when another woman comes up to yell in Spanish. Jordynne Grace comes in to defend the masked woman but Madison Rayne comes in and has a suggestion as the locker room leader.

This could be good. Wentz and Mack trade armdrags to start and Willie adds a cartwheel to show off a bit. Xavier sends Swann outside with a headscissors but Rich is right back in for the four way staredown as we take an early break. Back with Wentz getting two on Rich but Xavier misses a running flip dive. Mack comes back in with the Samoan drop into the standing moonsault for two of his own.

A reverse Razor’s Edge with a middle rope flip neckbreaker from Swann gets two more but Swann is sent outside. That leaves Willie to get double teamed with rapid fire kicks but Swann is back in with Trouble in Paradise to Wentz. A running corner clothesline sets up a super hurricanrana to Xavier, with Willie adding the frog splash for the pin at 9:26.

Ken Shamrock has been through a lot and knows Moose isn’t a tough guy. We hear his resume and he’ll be in Las Vegas to get in Moose’s face.

Moose isn’t going to let Shamrock use him to get attention on his new bare knuckle boxing promotion. He’s bigger and stronger than Shamrock so….here’s Fallah Bahh, who wants one more match.

Taya Valkyrie is ready to set the record for longest reigning Knockouts Champion. That one really sneaks up on you.

And now, down on the farm with the Deaners, as they continue to torture the Desi Hit Squad. Hay is rolled, horseshoes are hammered and Rohit Raju is having a great time.

Video on Havok vs. Su Yung.

Sami doesn’t know how Brian Cage is still World Champion and wants to know when he’s getting his title shot. Impact has one more week to announce the match or chaos ensues.

Taya is defending and this is her “big” opponent. Taya dances at her to start but a clothesline is ducked with a Matrix. As Callis accuses Josh of having a phone to Jacksonville and Stamford each, Taya hammers away in the corner. Mami pulls her down though and we get the required Stinkface. A middle rope moonsault misses so Taya puts on something like an STF to retain at 3:36.

Post match Taya says she’s the best so here’s the debuting Tenille Dashwood for a brawl. A Spotlight Kick knocks John E. Bravo down and Taya bails as Tenille holds the belt.

Madison Rayne is here with Kiera and Vanilla. Tormenta and Vanilla start things off with Chicka’s fisherman’s suplex getting an early two. Kiera comes in to stomp away but misses an enziguri. Madison grabs Jordynne’s ankle though and the brawl gives us a DQ at 2:00.

The brawl continues as Callis talks about meeting Bret Hart in the WWF dressing room and showing him respect, which is a comparison to Madison. Rosemary comes out and let’s have a six woman tag.

Joined in progress with Rosemary blocking Madison’s sunset flip so Madison bails over for a tag to Kiera. Grace comes in to splash Kiera but a second misses, setting off a pinfall reversal sequence. Tormenta and Vanilla come in to trade shots to the face until Vanilla hits a running crossbody in the corner. A slingshot elbow gives Vanilla two but it’s a double clothesline to put both of them down. That’s enough for Madison and Kiera as they walk out, leaving Rosemary to hit a double underhook drop (kind of a reverse Bubba Bomb) for the pin at 4:38.

Alisha Edwards comes up to Ace Austin on the beach, where he tries to tell her how he feels. Alisha: “Ok.” Then some masked men run up and steals her purse, with Ace following after them and getting in a fight in the water. Ace comes out of the water like a Baywatch scene and returns her the bag. She gives him a quick hug of thanks and leaves for her match.

Post break, we see Reno Scum being behind the theft, with Ace thanking them.

The North comes in to see LAX at the Clubhouse, which should be theirs. Konnan: “I can have you shot, stabbed, kidnapped or just straight up disappeared.” Konnan wants a title shot against the real LAX with Santana going into a big rant. They agree to put up the Clubhouse in a careers vs. titles match.

Falls Count Anywhere so they start brawling in the aisle. Rhino’s early clothesline hits the post as we hear about Callis managing Rhino back in ECW. Rhino drops him onto the apron for two but gets posted for his efforts. A slingshot splash gives Elgin two and an enziguri takes Rhino down again.

They slug it out on the floor and we take an early break. Back with Elgin hitting Rhino with a chair and sitting him in it for some chops. A running clothesline gives Elgin two and they fight into the crowd. The fight goes higher up into the stands for a slow slug/headbutt out. Another headbutt knocks Rhino back down a level and they’re on the stage in a hurry.

Elgin’s clothesline gets two and a discus elbow puts Rhino back at ringside for two more. Rhino suplexes him on the ramp for the same and it’s time for a table. That gets set up in the corner but Elgin hits him with a chair a few more times. Rhino gets in a crotching with the chair but the Gore hits the table. The Elgin Bomb is good enough to end Rhino at 18:14. 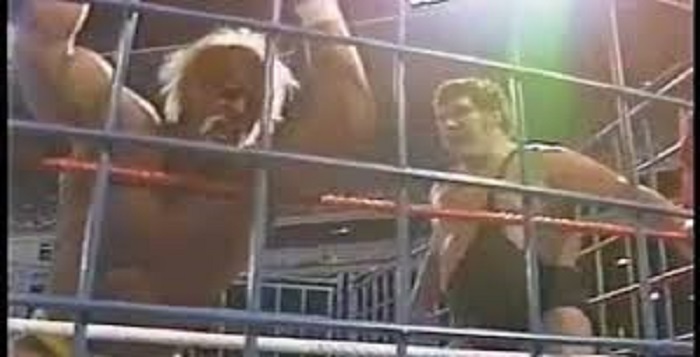