It’s the go home show for Rebellion and I’m curious to see how they push the rest of the card. The main event is long since set but we need more of the card being built up. We should be in for a good pay per view but some of that is going to be based on a good go home show. Let’s get to it.

We open with a video on Rich Swann vs. Kenny Omega, including last week’s press conference.

Rosemary is here with Decay. Anderson and Steve start things off with the former firing off some uppercuts. Steve gets smart by grabbing the arm and brings in Taurus to chop away in the corner. Decay takes turns on the arm but Andreson gets Taurus over to the corner so Gallows can hammer away.

A shot to the mask sets up Anderson’s chinlock, followed by Gallows’ elbows to the chest and a chinlock of his own. That’s broken up as well and the hot tag brings in Steve to pick up the pace. A low Downward Spiral gives Steve two and everything breaks down. Taurus is sent outside and Steve gets pulled out of the air for the Magic Killer and the pin at 5:14.

Post match the Brothers thank FinJuice for giving them the motivation and pouring the gasoline on them to make their fire hotter. FinJuice better have enjoyed their shiny titles in Roppongi because on Sunday, it’s a Magic Killer and new champs.

We get some predictions on Rich Swann vs. Kenny Omega, with most of the Impact wrestlers predicting Swann walks out with both titles.

Deonna Purrazzo and Kaleb With A K are here too. Susan wins a test of strength to start but gets reversed into a sunset flip for an early near fall. Purrazzo offers a distraction from the floor though and we take a break. Back with Dashwood caught in a full nelson and getting slammed down onto her face. Susan shouts at her about something, with Dashwood seeming confused. A slugout goes to Dashwood, who sends her into the corner for the Taste of Tenille. The Tarantula sets up the Spotlight Kick to finish Susan at 8:07.

Post match Dashwood calls Purrazzo into the ring and says she has done more for women’s wrestling than Purrazzo, who wouldn’t be here without her. So keep the title shiny because Dashwood has a photo shoot ready for it. Purrazzo looks ticked.

Brian Myers isn’t stuck in the past like Matt Cardona, so on Sunday, Myers is taking him out.

Video on Swann vs. Omega.

Sami Callihan says Trey Miguel threw everything away. He saw something in Trey and now it is time to make an example out of him. This Sunday it is Last Man Standing as Callihan is going to give him a chance to get back up…..before making sure he can never walk again.

Shera vs. Jake Something

Rohit Raju is here with Shera, who slams him down to start and drops a heavy elbow for two. Back up and Jake slugs away, setting up the discus forearm for a knockdown. Raju offers a distraction though and Shera hits the Sky High to finish Jake at 3:22.

Trey Miguel talks to his fellow trainer at his wrestling school and rants about how he has to prove himself to Sami Callihan for some reason. He’s ready to show who he is on Sunday.

We hit the Trey training montage.

Video on Josh Alexander vs. TJP vs. Ace Austin for the X-Division Title at Rebellion.

Here’s Rich Swann for a chat, with Striker saying that anyone who has ever put a piece of wrist tape on their wrist before a match has something in common with him. Swann talks about how he made a mistake last week when he tried to shake Omega’s hand last week, so get out here right now.

Kenny Omega and Don Callis pop up on screen to talk about how excited they are to have Omega win a third title. He needs a bigger house and another Swiss bank account. Goodbye and good night, bang. They leave….and here’s the returning Moose. He’s here to congratulate Swann because he has had a long time to think about what happened at Sacrifice.

Moose has some advice for Swann, who should be ready for this match because he took the TNA Title from a wrestling god. Swann has been shown what pain really feels like and Moose is bigger, stronger and faster than Omega. The only advantages Omega has are his three stooges, so Swann better not lose those titles.

Taylor Wilde is coming back and we actually see her for a change.

Tasha Steelz is here with Hogan. Grace jumps her to start and grabs a quick torture rack. That doesn’t last long so Grace sends her into the corner and comes out with a MuscleBuster, which draws in Steelz for the DQ at 1:55.

Post match the beatdown is on but the debuting Rachael Ellering runs in for the save to be Grace’s partner. Grace: “Rachael Ellering is going to be my partner at Rebellion!”

FinJuice mocks the Good Brothers for their excuses and now it is time for them to lose again.

Video on Omega vs. Swann.

Commentary runs down the Rebellion card.

The rest of Violent By Design, James Storm, Chris Sabin and Willie Mack are all here. Young is wrestling this on a torn ACL, which isn’t mentioned by commentary. They grapple against the ropes to start until Eddie snaps off a headlock takeover. An atomic drop into an overhead belly to belly send Young flying and we take a break.

Back with Edwards working on a front facelock but Young fights up and gets Eddie’s leg tied in the rope. That’s enough for Young to send him outside and it’s time to tease the big brawl. Back in and we hit the chinlock on Eddie for a bit. Young goes up but gets superplexed back down for the big crash. They slug it out with Eddie getting the better of it but Young slips out of the Backpack Stunner.

Instead Eddie hits a Blue Thunder Bomb as Striker thanks everyone for being so nice to him around here. As I try to fathom someone liking Matt Striker’s commentary, Young is back with a Death Valley Driver for two of his own. A tiger driver gives Eddie two more but Young rolls outside before the Boston Knee Party. Everyone gets in a fight on the floor, leaving Young to small package Eddie for the pin at 15:05.

The big brawl is on as Striker goes nuts hyping up the pay per view to end the show. 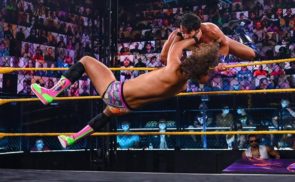