We open with a recap of Johnny Impact vs. Brian Cage before we get to the title match at Rebellion, including Killer Kross and crooked referee Johnny Bravo joining Impact.

Bahh and Raju start things off with the big man easily taking over off a big shoulder. Raj Singh comes in for a kick to the ample gut so Bahh knocks him down and drops the big leg. It’s off to Scarlett so the Squad starts tagging in and out instead of having to fight her.

With that going nowhere, Bahh comes back in and fights both of them off. Singh gets in a spinebuster, which just seems to get on Bahh’s nerves. That’s fine with Singh, who hits a running dropkick to the side of the head. Bahh shoves him over for the tag (Callis: “The HOT tag if you know what I mean!”) and it’s Scarlett chopping Raju into a hurricanrana. Bahh DIVES onto the Squad and Scarlett adds one of her own and the fans are way, way into this.

Back in and Raju begs for a Stinkface and gets one…from Bahh instead. Scarlett can’t German suplex Raj but she can send him into Bahh for a belly to belly. A double Banzai Drop (with Scarlett on Bahh’s back) finishes Raj at 8:22.

The Lucha Bros are ready for Eli Drake and Eddie Edwards but they haven’t forgotten about LAX.

The Deaners train for their Impact debut next week.

Eli doesn’t want to admit that Eddie was right but he’s happy with getting the Tag Team Title shot tonight.

The announcers recap last week’s main event and preview the rest of the night.

Tommy Dreamer is ready for Madman Fulton. They’ve both fought madmen before and tonight, Fulton is in for the fight of his life.

It’s the final Rascal vs. Moose, who throws Xavier off of a headlock. Some rights and lefts work a little better for Xavier but a right hand gets caught so Moose can wrench it around. An enziguri is shrugged off with Moose picking him up for a lawn dart into the corner. A catapult sends Xavier throat first into the middle rope and Moose, apparently bored, just stands on Xavier’s back.

Xavier manages to knock him outside but the dive is caught, allowing Moose to swing him head first into the steps. Moose powerbombs Xavier onto the other Rascalz but gets caught with an enziguri from Wentz. That’s enough for Xavier to grab a rollup for the surprise pin at 8:18.

Rosemary yells at Kiera Hogan for getting in over her head. Kiera says Allie is to blame for what happened to her but Rosemary doesn’t want to hear it. As long as there are two of them here, there will be two of them in the fight. That’s fine with Rosemary, who chokes Kiera out with a chain and says now it’s just one.

Moose is furious about losing and says two can play that game.

GWN Flashback Moment of the Week: Gail Kim retains the Knockouts Title over Awesome Kong at some show.

Tessa Blanchard doesn’t want to hear about Gail, because at 23 years old she’s already better than Gail ever was. All Gail is known for is marrying a chef, who wouldn’t have married her if he knew who Gail really was. That’s why she’s at Robert Irvine’s (Gail’s celebrity chef husband) restaurant and looks for him, eventually realizing that the chef is in the kitchen.

Before that though, she re-dirties a dishwasher’s dishes and finds out that Robert isn’t here today. That earns the replacement chef some sauce to the head. The manager comes in and gets soup on the head. Tessa says that makes it personal.

Post break Gail says she won’t be pressing charges because she’ll teach Tessa a lesson in the ring. Tessa is what Gail used to be so she knows what to do.

Sami Callihan is here with Fulton. Tommy is dumb enough to go straight at him and gets punched in the back for his efforts. A trip to the floor means Tommy needs to go after Sami, who gets ejected as a result. Back in and Fulton kicks him in the face, setting up a hard whip into the corner and a bearhug. Dreamer bites his way out and hammers away in the corner but has to hurricanrana his way out of a powerbomb. They head outside with Fulton missing a big boot and crotching himself on the post.

That just seems to wake Fulton up so he crotches Dreamer on the barricade to even things out. A suplex slam into a splash gets one and it’s off to a waistlock. The side slam gives Fulton two but he misses a middle rope headbutt (from the side to avoid landing on his head). Dreamer gets in a kick to the leg and the DDT but it’s kendo stick time instead of covering. Dreamer charges at him but walks into a swinging Downward Spiral to finish Dreamer at 8:00.

Post match Fulton goes after Dreamer again, drawing in Willie Mack for the save. The Crists come in and take Mack down so Rich Swann makes another save, earning himself a beatdown from Callihan. Dreamer’s arm is Pillmanized and Callihan calls Swann his little brother as OVE stands tall.

Rob Van Dam is happy to be coming back.

The Deaners are STILL coming next week.

Dreamer is going to a hospital to get his arm looked at. Swann and Mack are cool and Swann leaves. Killer Kross again comes in and asks why Mack has to make so many saves. Mack goes into a tangent about Moose being the annoying uncle who likes potato salad. Kross vs. Moose next week.

Non-title. Before the match, Taya rants about how horrible Canada is and how glad she is that she’s gone. Since she has a title match at Rebellion, she isn’t wrestling tonight. Not having that, Madison jumps her from behind…and gets beaten down anyway. Taya tries to walk out but here’s Jordynne Grace to throw her back inside to give Madison the rollup pin at 1:12.

In the arena, Cage grabs Callis and yells at him about Johnny. Callis calls someone on his phone and, after a break, it’s Scott D’Amore answering. Apparently Callis has a plan but here’s Cage to grab D’Amore. Lance Storm comes in and says to have some integrity, which earns him the guest refereeing job in the Rebellion main event.

Drake and Edwards are challenging. Fenix kicks both challengers down to start and it’s Pentagon coming in as well for the early posing. It’s way too early for the spike Pentagon Driver though and it’s Drake making the save to calm things down. Fenix gets dragged to the challengers’ corner and the rolling cutter is countered into a torture rack/top rope knee drop combination.

The tagging part is dropped again and it’s a double superkick to Drake. Fenix dives to the floor to take Eddie out and it’s time for the spike Fear Factor…but here’s LAX. Drake tries to use the distraction for a rollup but gets kicked back down. Now the spike Fear Factor retains the titles at 5:14.

Post match Eddie offers Drake condolences but gets laid out. A big beating with Kenny, including a shot to the head, ends the show. 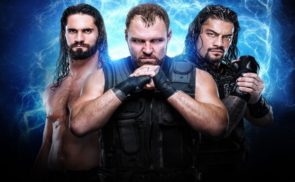 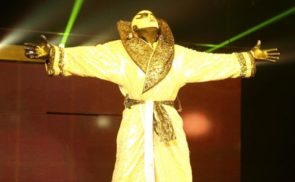