We’re less than two weeks away from Bound For Glory and things are already starting to clear up. The big matches don’t have the best build and you could argue that the (presumably non-title) match between LAX and the OGz is the biggest thing on the card. That’s not a bad thing, but it makes for a kind of odd build. Let’s get to it.

The opening recap focuses on the upcoming Bound For Glory matches, many of which were adjusted or made last week.

Swann isn’t interested in a handshake, much like the referee isn’t interested in an opening bell. Sydal gets kicked to the floor for a flip dive off the apron, followed by a headscissors back inside. A kick to the face puts Sydal down again but he’s right back up with a leg lariat to send Swann outside.

Back in and Swann kicks him in the ribs and then the face for two. Sydal’s top rope hurricanrana doesn’t work as Swann lands on his feet, then uses one of said feet to superkick Sydal into the corner. Another hurricanrana attempt is countered into a jumping powerbomb for two but Swann is fine enough to hit a spinning kick to the head. Swann heads up top but some unnamed guy comes in to powerbomb him down (which the referee somehow doesn’t see), setting up Swann’s snap Angle Slam for the pin at 7:30.

Post match Josh Matthews identifies the fan as Ethan Page, who used to be Chandler Park for like a month earlier this year.

Dave Crist is freaking out over what Pentagon and Fenix did to him last week. Sami Callihan tells him to snap out of it and face them in the ring like men.

Moose calls Eddie Edwards and tells him to meet him for a fight at a bar. He also may have kidnapped Alisha.

Here’s Scarlett Bordeaux to do commentary for the start of her talent search. Callis is of course drooling over her, as is his custom.

Open challenge. Before the match, Drake tells a technico to come out here with their fancy planchas, but he’ll take a rudo as well. The challenge is answered by…..La Parka, who isn’t the same guy from WCW but is still a big star in his own right. La Parka yells in Spanish before the fight is on with the masked man taking over. The shaking knee dance takes too much time though and Drake hits his jumping neckbreaker. Drake goes for a chair but gets caught with a reverse DDT, only to run away from the chair for the countout at 2:37.

LAX and the OGz get in their weekly argument. The OGz even steal their alcohol and throw it at Konnan, who still won’t break the ceasefire.

Sydal introduces Page, who praises Sydal’s vision.  They issue a challenge for a tag match at Bound For Glory against Swann and whoever he can find.

Before the match, Hendry and Grado debut a new music video of “Katarina” and “Murder Clown” on a date, complete with lyrics of Clown wanting romance and violence. A sample: “I may not be a pirate and we may not be related, but baby I’m a murderous clown and that cannot be understated.” Clown clotheslines him down to start and ties Hendry in the Tree of Woe for a charge. Hendry manages the fall away slam but gets kicked away without much effort. A top rope splash finishes Hendry at 2:50.

Post match Katarina hits Grado low and Hendry gets splashed through a table.

Edwards goes to the bar to find Moose and Alisha. Moose tells him to sit down and recaps their feud over the last few weeks. Edwards says Austin Aries and Killer Kross aren’t Moose’s friends but Moose isn’t having that. A lot of yelling ensues until Alisha breaks a glass over Moose’s head. Eddie charges and turns the table over but Kross comes in to grab him. Edwards fights them both off and escapes with Alisha before calling Johnny Impact, telling him to go after Aries now. This was the most coherent Edwards has been in months and he sounded like his old self.

Post break, Impact kicks in the door to Aries’ locker room but the champ is nowhere in sight. Aries is nowhere to be seen backstage either so Impact heads to the ring. Impact wants Aries out here right now so here he comes, with a sling around his arm. Aries claims an arm injury, a back injury, a twisted ankle and a concussion after Impact hit him with the title last week.

This is about the title though, and that’s why Impact isn’t fighting him right now. It’s about being the best instead of how many goons you can recruit. Aries is so confident that he’s willing to leave Moose and Kross in the back so that it can be one on one. Aries knows he’s the best in the world, but who is Johnny this week? Mundo? Impact? Boone? Survivor? Impact doesn’t know which basket to put his eggs in while Aries has put his eggs in the basket of being the best in the world.

Sure, Impact looks great but he’s just a pretend top star. Aries may not look like he does but he knows that he’s great in the ring. At Bound For Glory, Impact can co-star in Aries’ starring role when he brings his black trunks and black boots. After the match, Johnny can take the name Johnny 205, because it’s the last job he can get. Maybe he can just join Aries as the latest goon.  Impact would rather be stretchered out than follow an idiot like Aries so the beatdown is on. Aries misses a belt shot though and eats a superkick, followed by Starship Pain.

Cage is ready to destroy OVE.

The Desi Hit Squad isn’t happy about losing last week and thinks they’re not being aggressive enough. Gama Singh comes in to yell at them again before saying they’re fighting next week to see who the weak link is.

Classic Moment of the Week: Hulk Hogan turns face to save Sting from Immortal at Bound For Glory.

Scarlett, in a different outfit than earlier, turns down various people trying to be her client, including Petey Williams and Trevor Lee. Petey even offers to teach her the Canadian Destroyer, much to Lee’s disgust.

Pentagon and Fenix are down for a fight with OVE tonight.

Allie and the Undead Maid of Honor are both here. Kiera goes right at her to start and runs Su over in the corner for an early two. An electric chair faceplant out of the corner gives Yung the same thing and some palm strikes keep Kiera in trouble. That’s fine with Kiera, who slugs away some more and hits a low superkick to put Yung on the floor for a suicide dive. The Panic Switch is countered into a sitout powerbomb for two on Yung and Kiera heads up. That means a fight between the seconds and the distraction lets Yung hit the Panic Switch for the win at 4:17.

Post match the bridesmaids bring out the casket but Allie makes the save. That earns her a Mandible Claw until Kiera makes the second save, only to get slammed into the coffin as well.

Bound For Glory preview. Sami gets triple teamed to start and Fenix gets two off a Swanton. We settle down into a regular match with OVE breaking up Fenix’s springboard, albeit after he bounced about four times. It’s too early for the All Seeing Eye though as Fenix sends them into each other, allowing the tag to Cage. House is cleaned, including Cage putting Jake on Dave’s shoulders and German suplexing both of them at the same time. That’s enough for Sami, who shoves the referee for the DQ at 3:39.

Result: Brian Cage/Pentagon/Fenix b. OVE via DQ when Callihan shoved the referee (3:39)

Post match the fight stays on with the brawling continuing. Cage climbs to the second ropes and deadlift superplexes Jake onto everyone, followed by Fenix hitting a corkscrew plancha off the barricade to take everyone down again. The fighting continues to end the show. 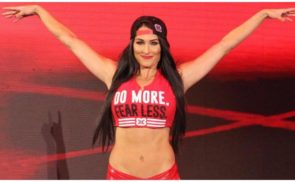 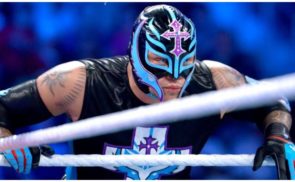 Here’s Who Rey Mysterio Will Feud With After WWE Return