Tonight is the Redefined show, which could mean several things. We’ll be getting a few title matches, including Su Yung defending the Knockouts Title against Tessa Blanchard and Allie, along with Fenix challenging for the X-Division Title. I’m sure there will be some more with Eddie Edwards/Moose vs. Austin Aries/Killer Kross as well. Let’s get to it.

We open with a recap of the two title matches plus the Edwards vs. Aries feud.

Fenix is defending and has Pentagon Jr. with him. Some early flips keep Fenix away from Cage until a drop toehold sets up a 619 from the champ. Fenix tries some springboards but gets his head taken off with a clothesline. Another springboard is broken up and a delayed apron superplex has Fenix in even more trouble.

Fenix finally scores with some kicks to the face but Cage runs him over again without much effort. More kicks just get Fenix tossed onto the ramp but he manages a Lethal Injection onto the ramp for a breather. A Swanton gets two but Cage hits his own superkick and a reverse Death Valley Driver. The fans are already on the FIGHT FOREVER chants.

Fenix monkey flips him into a double stomp for two more but springboards into an F5. More kicks send Cage outside but he reverses a suicide dive into a suplex on the floor. Back from a break with Cage getting frustrated and Fenix kicking him in the head again. That just earns Fenix a diving middle rope DDT and they’re both down. Another superkick rocks Cage…but he shrugs it off and superbombs Fenix to retain at

Post match OVE comes in for the beatdown but Cage makes the save.

Recap of Moose returning last week and saving Edwards from Kross and Aries.

Classic Clip of the Week: Drew Galloway debuts in January 2015.

Impact is coming to Mexico.

We look at the OGz running over a kid last week to get at LAX.

King yells at the OGz for feeling sympathy about the kid. Someone calls King and he leaves.

We recap the Knockouts Title match, which is Allie trying to get revenge on Yung for all of her attacks on Allie’s friends. Tessa is here because she wants to be champion.

Tessa isn’t feeling pressure because she’s a Blanchard. That means you need something though, and that’s why she’s winning the title tonight.

Here’s Eli Drake for a chat. Eli has had the Cult of Lee following him around for the last few weeks. They’re never going to be friends and Drake wanted to see what happened last week when they got in over their heads. Cue Mr. Atlantis and Brandon Tidwell, the guys who beat the Cult of Lee last week. They’re not quite ready to be stars yet because they have one more test. After pausing to listen to the THEY ARE DUMMIES chant, Drake says one of them has to face him tonight. Atlantis volunteers so Drake says he’ll face Tidwell.

Atlantis takes a Gravy Train of his own.

Moose and Edwards are ready for revenge.

Yung is defending and has the Undead Bridesmaids while Allie has Kiera Hogan. Tessa hits them both in the face but Allie snaps off a Backstabber to take over. Allie clotheslines Tessa to make her DDT Yung but the champ pops back up for a staredown with Tessa. That earns Yung a shot from Allie but Tessa takes her down into a leglock.

Yung is back up for an armbar on Allie at the same time but ropes are grabbed in short order. Tessa press slams Yung onto the Bridesmaids but gets suplexed into the corner to give Allie two. Allie superkicks Tessa into the Mandible Claw but takes one herself a few seconds later. A slam gets Allie out of trouble but Tessa rolls her up for the pin (with trunks) and the title at 6:21. Tessa looks shocked that she won.

Result: Tessa Blanchard b. Allie and Su Yung – Rollup with a handful of trunks (6:21)

In the back, Tessa says she knew she could do it and proved it. Come try her to see how tough a diamond can be.

Gama Singh beats up the Desi Hit Squad for failing.

Aries and Kross promise pain for Moose and Edwards. They’ve turned everything upside down and no one is safe.

LAX isn’t happy with the kid being run over. Konnan tells them to take care of the kid’s family but gets a phone call from someone he calls sir and leaves. LAX isn’t sure what to think but they’re not happy.

It’s time for the Smoke Show with Grado, Katarina and Joe Hendry. Scarlett suggests that there’s something between Katarina and Hendry but Joe says it’s not true. They’ll have a tag match next week and Hendry’s song will fix things. Scarlett whispers something to Grado and the water shoots out of his bottle. Katarina isn’t happy and the guys run off, leaving her to yell at Scarlett.

Swann goes straight to the dancing to start and throws in some splits for good measure. Petey sends him outside but comes back in with the slingshot Codebreaker. Swann flips over him and scores with a dropkick, only to be sent outside in a heap. Back from a break with O CANADA but Swann avoids a charge in the corner.

A pinfall reversal sequence gives them two each until Petey pulls him down for a Sharpshooter attempt. That’s broken up as well and Swann hits a Falcon Arrow for two more. Swann misses the middle rope Phoenix splash but slips out of the Canadian Destroyer. Another pinfall reversal sequence gives them two each and Swann this the running shooting star for the pin at 10:20.

The announcers talk about Konnan apparently having a boss.

Swann wants the X-Division Title when Matt Sydal comes in to say Swann doesn’t know what he’s in for. As Sydal offers his help, Moose is found with the X symbol next to him.

No Moose. Kross starts for the team and plants Eddie with an early spinebuster. Aries comes in for a kick to the back of the head but Eddie is back with some kicks of his own. A running kick can’t knock Kross off the apron so Eddie kicks Aries to the floor. Kross cuts him off though and Aries takes over again. The villains take turns kicking and stomping away but Aries takes too much time going up.

The Backpack Stunner out of the corner gives Eddie a breather and a Blue Thunder Bomb gets two. Kross gets knocked outside and Eddie drops Aries with a suicide dive. With Aries back in, Kross suplexes Eddie on the floor to take him down again. Back in and a tiger bomb plants Aries but here’s the taped up Moose to grab Aries by the throat….and then spear Eddie. The referee gets thrown out and we’ll call it a no contest at 7:40.

Result: Austin Aries/Killer Kross vs. Eddie Edwards went to a no contest when Moose threw the referee out (7:40)

Post match Moose chairs Eddie. Alisha runs out to yell and slap Moose, who glares at her to end the show. 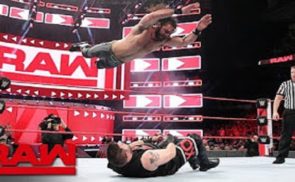 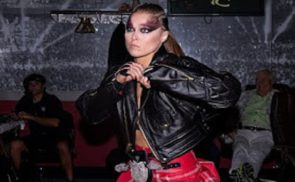