It’s the Thanksgiving episode tonight and the main story is an eight man elimination tag with Team Roode vs. Team Angle. No word on who will actually be on each team, but it shouldn’t be that hard to figure out. We should also get some buildup for the remaining tournament matches. Let’s get to it.

Here’s Dixie to open things up. With the southern accent rolling she talks about how things have gotten so crazy around here lately that she needs some help. Therefore, here’s hew new Chief of Staff: Rockstar Spud. He’s from British Boot Camp and OVW in case that name means nothing to you. Spud immediately sucks up to Dixie and says Impact would be nothing without her. The roster is put on notice that he’s watching them and that Carter is the queen.

This brings us to the tournament matches. First up we’ve got Jeff Hardy vs. Bobby Roode and the Wheel of Dixie has made that a tables match. Angle vs. Magnus on the other hand is a last man standing match. That’s all on that front as Dixie talks about the winners of the matches tonight getting a feast while the losers get nothing. You can see the food fight from here. Finally here’s Ethan Carter III to suck up to his aunt a bit before his match.

Curry Man is Christopher Daniels as the mascot of a Japanese curry company. He rants in Japanese a lot and is slammed down a lot as the bell rings. Carter slams the masked head into the mat a few times while telling him how rich he is. We hit a camel clutch and a YOU CAN’T WRESTLE chant breaks out. A clothesline and a suplex get two for Carter but Curry Man comes back with some forearms and dodges a splash. The jobber comeback is short lived though as he goes to the top and gets punched in the jaw, allowing Carter to slam him down. The One Percenter is good for the pin on Curry Man at 3:37.

We look back at Gunner costing Storm the match last week by throwing in the towel.

Gunner is in the back and will be part of Team Angle tonight. Storm comes in and will be on the team too because whatever problems he has with Gunner can be dealt with on off hours. Gunner says he did what he thought was best last week but Storm doesn’t want to hear it. More on this later I’m sure.

The Bro Mans are with their new DJ Zema Ion when ODB and Eric Young come up. The tag champions aren’t interested in being in the Turkey Bowl tonight, but they’ll take the match upon hearing their opponents: Norv Fernum and Dewey Barnes.

Tapa sends her into the corner to start and runs her over, only to have Velvet avoid a charge and get in a few forearms. Gail trips her up though, only to be ejected from the arena. Tapa runs her over again and chokes a lot before kicking Velvet in the face to put her down again. The fireman’s carry into a Stunner ends Velvet at 3:35.

Video on the Turkey Bowl, a match where the loser wears a turkey suit.

This is the Turkey Bowl match with Turkey Bowl bosses ODB and Eric Young at ringside. The Bro Mans now have DJ Zema Ion introducing them which is as good of a job for him as anything else. Robbie rants about how amazing the champions are as Zema does sound effects. The bell rings and the jobbers get rollups for two each, but a Hart Attack ends Barnes at 18 seconds.

Post match the losers are put in the turkey suits while Robbie makes turkey sounds and forces them to dance. The goons seem to enjoy it.

We get another video of AJ in Mexico, talking about what an honor it is to defend the title
Dixie freaks out and gives AJ one week to give the title back or the legal options begin. What would wrestling be without a legal threat every week?

Roode with with his team: Chris Sabin and Bad Influence.  Jokes are made but Roode wants them serious.

Angle and Magnus agree to team up tonight but beat each other up for a shot at the title next week.

We get a video on Anderson beating ray last week to end Aces and 8’s.

It’s time for a funeral for Aces and 8’s, held in a funeral home with some Main Event Mafia members, Mike Tenay and Eric Young as the only people there. Joe eats cookies while Young cries. No one has anything to say but Anderson pops out of the casket. He says he was trapped in the team for a year, meaning he rode motorcycles a lot and was part of many many many many many many many many segments on the show. He also thanks Hulk (not named) for sending over a delicious deli plate.

Angle wishes D’Lo the best and throws a bobble head into the casket in his memory. Joe swallows whatever he’s eating and talks about the Aces hiding behind masks which they should have kept on. He has a six pack which symbolizes the only way to look at the bikers without masks on. Joe hands them out instead of throwing them in the casket (making sure not to give one to Kurt in a nice touch). “To the Aces and 8’s: may they ride their mopeds to the shores of Valhalla.”

Tenay talks about Tazz being at the broadcast table with him but buries Tazz’s cut and Brooke’s shorts. The shorts wind up in Tenay’s pocket of course. Eric is up next and buries one of the turkey suits, sending him into a fit of crying. Anderson goes last and thinks about putting in Ray’s hammer but says he’ll keep it since it’s a perfectly good hammer. Ray comes I and tells Anderson to sleep with one eye open in the best interest of his pregnant wife. Ray calls death the final awakening and leaves. Really fun segment here, though it was better in 2005 when they held one for Team 3D and really cranked up the jokes.

Spud yells about food some more.

Elimination rules. The captains get things going with both submissions quickly being escaped, giving us a standoff. Bad Influence comes in at the same time so Angle clotheslines them down, sending Daniels to the floor. Off to Magnus for some forearms before he cranks on the arm for a bit. Storm comes in to pound on the legal Daniels before bringing Gunner in for a clothesline/Russian legsweep combo for two. Gunner is sent out to the floor where Kaz and Sabin get in some cheap shots and the heels take over.

Back in and Sabin works over Gunner for a bit, only to quickly tag in Bad Influence. Gunner runs them over and slams Daniels down, allowing for the hot tag to Storm. The corner enziguri puts Daniels down and it’s a Backstabber for Christopher and a Closing Time to Sabin. Last Call drops Kaz but Sabin grabs a rollup to eliminate Storm.

Magnus comes in for the first time and clotheslines Sabin down before bringing in Daniels for some chops to the chest. Magnus charges into a boot in the corner though, allowing for the tag back to Kaz. Bad Influence double teams Magnus down for two but Magnus coms back with a quick slam. A double tag brings in Kaz and Gunner with the tattooed one catching Kaz in an Irish Curse backbreaker. There’s the Gun Rack but Daniels breaks it up. The High/Low is enough to get rid of Gunner and get us down to 4-2.

It’s Magnus in for the good guys but Daniels easily takes him down and works him over. Magnus fights up from his knees before hiptossing Daniels out to the floor. A clothesline off the apron takes Daniels down but Magnus hurts his knee. The medical staff comes out to check on him as we take a break. Back with Magnus gone, meaning it’s 4-1.

The heels hit a series of legdrops on Angle with Sabin getting a two count. Angle grabs a quick cradle but Daniels has the referee to prevent a count. Kurt fights up and takes out as many bad guys as he can with clotheslines before suplexing Roode and Sabin out of their shoes. In a very impressive power and stamina display, Angle hits ELEVEN Rolling Germans on everyone not named Sabin, including one to Bad Influence at the same time.

An Angle Slam puts Sabin down and there’s the ankle lock to Kaz. Daniels tries to break it up so there’s a double ankle lock to Daniels and Kaz at the same time. Roode brings in a chair but gets caught in an Angle Slam. Kurt blasts Roode with the chair for the DQ at 18:18.

Team Roode celebrates in the back with Roode saying Angle can’t beat him.

Storm wants to know why Gunner didn’t save him in the tag match. Gunner wants to know if they have plans as a team and walks off. Storm says no one dictates the futures of Storm and Gunner.

Video on the final four in the tournament.

Here are all of the winners of the matches tonight plus Velvet who is with Sabin. Roode points this out and Sabin throws Velvet out. Bobby asks everyone what they’re thankful for. Bad Influence is thankful for their intelligence and large endowment. Kaz is thankful that Park isn’t here to drink the gravy or fornicate with the pumpkin pie. Gail is thankful for being the prettiest and most dominant Knockout in the history of the company. Oh and her family too.

Sabin is thankful for his hair, being the best X-Division Champion ever and Velvet Sky. The Bro Mans are thankful for Mr. O Phil Heath, Zema Ion (officially part of the team) and for being the best team ever. Bad Influence: “I’m not sure about that.” Roode says the real Thanksgiving was last month in Canada and the fans will be thankful when he becomes the next champion.

It’s time to eat but here’s Angle to interrupt. He sees a ring full of turkeys, which are fighting words for the people in there. Roode challenges him to a fight which Angle accepts, and here’s his backup. Fernum and Barnes are still in the turkey suits. You can fill in the blanks yourself here: bad guys are destroyed, food is everywhere, Spud panics, turkeys fly. The good guys, Velvet and ODB celebrate to end the show.

I’m also running a Christmas sale on my ebooks.  Check it out here. 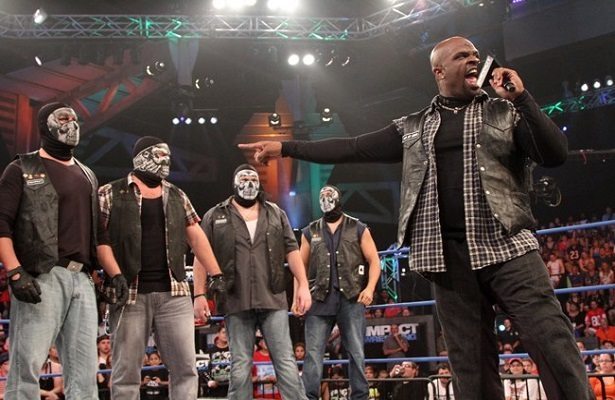 Video: The Funeral for the Aces and Eights