We’re down to just two episodes left but I’m sure the TV deal is coming any day now, right Dixie? The main story at the moment is the build to Roode vs. Lashley III, but as is the case with everything else, there isn’t anywhere to actually air the match. We also have the Wolves vs. the Hardys coming up at some point. Let’s get to it.

We open with a recap of MVP getting on Lashley’s nerves last week and then losing a title shot.

Lashley is waiting for MVP but finds Kenny King. He asks where MVP is but King doesn’t know. That’s not good enough though as Lashley wants to know where MVP is. King keeps walking and doesn’t like Lashley’s attitude.

Here’s the Revolution to open the show. Storm offered Richards a chance to join the team last week and now he wants his answer. He gets both of the Wolves though with Eddie saying that the answer is always going to be….cut off by Davey apparently. Davey says he can speak for himself and he’s been listening to what Storm has been saying. A lot of it makes sense, but after after all this time, he’s come to the conclusion that Storm is out of his mind.

The answer is no so Storm sends the Revolution after them. Storm uses his noose around Davey’s legs before crushing it with a chair. Security gets rid of Storm but he comes back with a briefcase. Edwards tries to fight back but takes a briefcase to the head. Eddie takes a case shot to the ankle before Storm yells at the referee. The case is his Feast or Fired Tag Team Title briefcase, meaning he has a shot with a partner of his choice at any time.

James covers Eddie for two before planting him with the Eye of the Storm. Storm grabs the mic and says he told Edwards to stay out of it. Cue Abyss as the newest member of the Revolution. A chokeslam to Edwards sets up the Black Hole Slam to give Storm the pin and the titles at 3:06.

Taryn gets jumped as she comes in but fires away on Madison. Rayne runs up the ramp but Terrell throws her back into the ring for another beating. Madison comes back with a kick to the ribs for some two counts as frustration is starting to set in. Taryn’s face is bounced off the mat for two but Madison runs into some knees in the corner. A running neckbreaker drops Madison and Taryn is all fired up….until she runs into a boot in the corner. Madison hammers away but the Rayne Check is countered into an RKO to give Terrell the pin at 6:38.

Lashley comes up to Angle and demands his rematch tonight. That can’t happen because Roode isn’t here, so Lashley gets in Angle’s face. The tension continues to grow.

Sheera, the Indian wrestler, is in the back when Manik jumps on his back. In a friendly way of course. Manik says there’s a powerful man that Sheera is ready to meet. Sheera goes off with him.

Here’s Kenny King with something to say. He doesn’t like the fact that Lashley is so angry at everyone because it means bad things for Impact Wrestling. However, he’s here to address Chris Melendez, who had a little dust up with him a few weeks back. Cue Melendez and Anderson with King calling Melendez a fraud.

That’s not cool with Anderson who calls Melendez a hero and an inspiration. King says he’s talking to peggy over here because Melendez doesn’t belong in this ring. He wants to fight Chris one on one but Melendez says Anderson is his role model. King says role models don’t exist and sucker punches Anderson before running.

Gail Kim and Taryn are in Angle’s office to complain about Havok so Angle makes a triple threat for the title next week.

Handicap elimination tag. Angelina and Rebel get things going with Love avoiding a kick and scoring with a dropkick for two. Rebel comes right back with a quick rollup for the pin to get us down to 3-3. Off to Knux vs. Jesse with the big man cleaning house with a cartwheel into a dropkick for two. Knux lifts DJZ up for a slam but Jesse dropkicks his partner’s back and grabs the foot, giving DJZ a fast pin.

Steve rolls up DJZ for the pin a second later, leaving us with Sky/Jesse vs. Steve/Rebel. The girls go at it for a bit until Angelina sneaks back in with hairspray to Rebel, giving Sky the pin. DJZ flips Steve into a facebuster, setting up a gorilla press drop. Sky comes back in to kick Steve in the ribs, only to get rolled up (and kissed) for the pin. It’s down to Jesse vs. Steve with the Craazy one being powerbombed for an arrogant two. Jesse puts him on the top but gets caught in a tornado DDT for the pin at 7:04.

Eric Young is in the back when Spud comes up and asks to be in his corner tonight. Young says okey dokey.

We look at the opening again.

The Revolution is in the back with Storm telling Abyss that this is just beginning. Sheera comes in but Storm spits on him and tells him to leave. Storm whispers something to Manik who bows and leaves.

Young goes after Tyrus to start but the big man throws him into the corner and heart punches him out to the floor. Back in and Young tries a slam for the exact result you would expect. We hit the nerve hold on Young before Big E.’s Big Ending plants Eric again. A Vader Bomb misses though and Young fires off whatever he can. Spud stops Carter’s interference as Young shoves Tyrus off the top, setting up a top rope elbow for the pin at 4:50.

Post match Lashley runs in and cleans house, including Pillmanizing Young’s arm and putting him in a Crossface. Austin Aries comes out with a chair of his own for the save. A challenge is made for later.

Brittany is with Samuel Shaw in the back and says Gunner came onto her. Shaw isn’t pleased and storms off.

Here’s Samoa Joe who says he has to make a difficult but correct decision. He isn’t medically cleared to compete for quite awhile and therefore he can’t defend the title. When he won the X-Division Title again, it was to rebuild the division that the company started on. The wrestlers in the division as well as the fans deserve better, so he’s vacating the title tonight. There will be a new champion crowned but the belt is a beacon to bring Joe back for his title.

Bram wants to face Tommy Dreamer in a hardcore match next week. Dreamer’s time is over so he’s going to bleed next week.

No DQ. Shaw hides next to the entrance and jumps Gunner at the entrance. We pause so Shaw can kiss Brittany, allowing Gunner to take over again. Shaw sends him into the post but again looks at Brittany, setting up a fall away slam from Gunner. They head inside with a bunch of chairs, including one going into Shaw’s ribs. He comes back with a dropkick to send a chair into Gunner’s face but Gunner escapes the choke.

A Cactus Clothesline puts both guys on the floor and Brittany makes sure Shaw is ok. She distracts Gunner again, allowing Shaw to send him face first into the steps. Back in and Gunner punches Shaw out of the air before stacking up the chairs on the floor. A superplex puts both guys down on the chairs but Brittany gets up on the apron again.

That’s fine with Gunner who powerbombs Shaw off the apron and onto the steps. All three get in now and Brittany kicks Gunner low before trying to drag Shaw over. Gunner grabs her leg though, allowing Shaw to nail him in the back with a chair. He takes too long to go for his choke though and takes an F5 onto the chairs for the pin at 8:58.

Aries throws his shirt in Lashley’s face to start and tries an early brainbuster but is easily powered down. The Last Chancery doesn’t work either as Lashley throws him out to the floor. Aries nails the running dropkick against the barricade to take over but Lashley shrugs off the missile dropkick back inside. Lashley shoves him out of the corner and we take a break.

Back with Lashley snapping off so many belly to belly suplexes that even Scott Steiner would say something incomprehensible about sugar or being from a highly educated university. Oh and freaks. Always freaks. The spear is blocked though and Aries scores with a missile dropkick. Some discus forearms put Lashley on the floor for the suicide dive but Lashley throws him into the steps. The spear connects on the floor but it’s a double countout at 15:23.

Result: Austin Aries vs. Lashley went to a double countout (15:23)

Lashley press slams Aries on the ramp and puts Aries in the Crossface to end the show.

Gunner b. Samuel Shaw – F5 onto a chair

Lashley vs. Austin Aries went to a double countout

This concludes our live coverage of Impact Wrestling.  Make sure to join us tomorrow at 4pm EST for NXT.

Update on Hulk Hogan and Sting Competing at WrestleMania 31 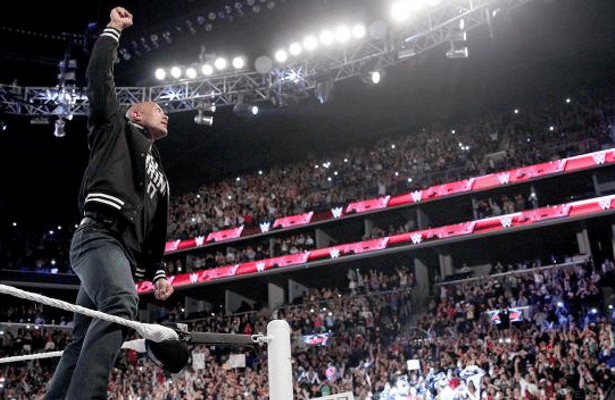 Update on Whether or Not The Rock Can Work WrestleMania 31