We’re past the halfway point in the qualifying matches as almost everyone has had two of their three matches. Tonight it’s week six and we’re going to have some people wrap up their round robin stuff, meaning we can actually see the light at the end of a very long tunnel. Let’s get to it.

Opening recap and preview of last week and this week.

The announcers preview things as well.

Before their match, we see Madison Rayne going through some ninja training to get her ready for Gail Kim.

Winner moves on to the round of sixteen. Gail takes her down to the mat to start as Pope makes ninja jokes. A pinfall reversal sequence gives them both some early near falls. Madison sweeps the leg for two but Gail’s cross body gets the same as Josh talks about this being winner take all.

Back from a break with Gail missing her running cross body in the corner and crashing out to the floor to give Madison an opening. For some reason she follows Gail to the floor, only to get sent into the steps to change control. Back in and Gail’s dragon sleeper doesn’t go anywhere so Madison hits a basement cross body for two. Madison tries the Rayne Drop but a quick small package sends Gail to the round of 16 at 11:21.

We get an interview with Matt Hardy who says it’s going to be trendy when he sweeps the whole Series and proves that he’s the World Champion once and for all. What better way to prove he’s the best than by beating everyone? Both life and a wrestling career are too short to have regrets and it wasn’t fair to anyone to have EC3 drag it out for years.

It wouldn’t be fair to the fans or TNA (“They might not even be on TV anymore.”) so he gave up the title for the sake of the future. He won’t be taking tonight off against Eddie Edwards because Eddie is the future, but tonight Eddie is the next victim of the Matt Hardy formula. Of course he wants to face EC3 in the finals because he wants to take away that undefeated streak.

Jesse says he wants to win the title so he can be on a cereal box. Very slow feeling out process to start with Drake’s headlock going nowhere. A test of strength goes to Eli with the help of a knee to the ribs. Jesse’s press slam goes nowhere as his knee buckles and Drake starts in on it.

Some slow kicks to the knee don’t seem to bother Jesse as he comes back with a backbreaker and enziguri. They trade rollups with handfuls of trunks for no count each so Drake puts him on the top but gets shoved away. That’s fine with Drake as he crotches Jesse down and puts his feet on the ropes for a pin at 6:51.

Ethan Carter III is at TNA headquarters (which looks like a local pub) to pay the fine in person.

Drake brags about his win.

It’s time for the World Title Series awards. Pope picks Matt Hardy as MVP, Davey Richards vs. Eddie Edwards as Match of the Series, Shera as Most Improved, James Storm as Most Disappointing and Lashley vs. Aries as the Best Match To Come.

Edwards is eliminated if he loses. Matt takes it to the mat to start before they trade wristlocks. A forearm to the back has Eddie in trouble and we take an early break. Back with Matt being sent to the floor for a suicide dive but Eddie chops the post by mistake. Pope: “My lawd it’s got me checking my fingers daddy!” A Side Effect on the apron is broken up and Eddie DDT’s Matt instead.

Back in and Eddie chops with the bad hand but walks into a double clothesline to put both of them down. Eddie has to break a sleeper by falling back onto Hardy and a Backpack Stunner gets two. The Side Effect and Twist of Fate are countered into rollups for two each and a kick to the head gets the same. Eddie goes up top but gets crotched, setting up a super Twist of Fate (minus the twist) for the pin at 11:05.

We look at the end of Bound For Glory with Ethan shoving John Gaburick to draw a huge fine.

Ethan comes in to Dixie’s office and accuses her of robbing him of the title. Dixie asks what happened to him but Ethan pays the fine and leaves.

Matt praises Eddie for his toughness.

Pope decides whose bubbles are going to pop soon.

Mandrews quickly takes him to the floor and moonsaults off the steps, followed by an overshot flip dive over the top to the floor. Back in and Mandrews’ standing moonsault takes too much time to set up, allowing DJZ to kick him away with ease. DJZ cranks on an armbar but walks into a fast hurricanrana for two. Another hurricanrana out of the corner gets two more and Mandrews gets all ticked off, only to charge into a shot to the face. Mandrews kicks him off the top but a shooting star hits knees, giving DJZ the pin at 5:55.

Preview of next week.

Eric Young wants to break Josh Matthews for saying his bubble is about to burst in the tournament, even though Pope said it. Young is ready for James Storm next week.

Pope changes his pick to Young over Storm.

Ethan Carter III was in India earlier this week and promises to beat Mr. Anderson tonight.

The semi-finals will be in India.

Drew Galloway is in Scotland to prepare for his final match in the group stage.

Another preview of next week.

Video on the history between Mr. Anderson and EC3.

They chop it out to start with Anderson getting the better of it and sending Carter to the floor as we take a break. Back with Anderson firing off more chops and pounding Carter in the head as Carter tries to cover up. A quick baseball slide takes Tyrus out and a boot to the face looks to set up the Mic Check.

Carter drives him to the floor to counter, which Pope refers to as dinosaur land. Anderson gets sent into the apron and Carter bends his fingers back for good measure. We hit the chinlock as Pope and Josh compare Anderson and Carter’s upbringings in the business. Anderson fights out with less than five minutes to go and easily wins a slugout.

The Regal roll and a swanton get two on Carter and both guys are tired with two and a half minutes to go. Anderson goes up top and counters a super 1%er into a middle rope Regal roll for two more. Tyrus and Earl Hebner argue on the floor (Tyrus: “YOU’RE TOO OLD!”) so Anderson beats Tyrus up with a chair with a minute left. Hebner gets rid of the chair, allowing Carter to kick Anderson low and grab a jackknife rollup for the pin at 16:24. 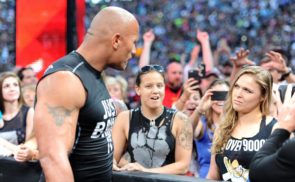 Report: Are The Rock And Ronda Rousey Appearing at WrestleMania 32? 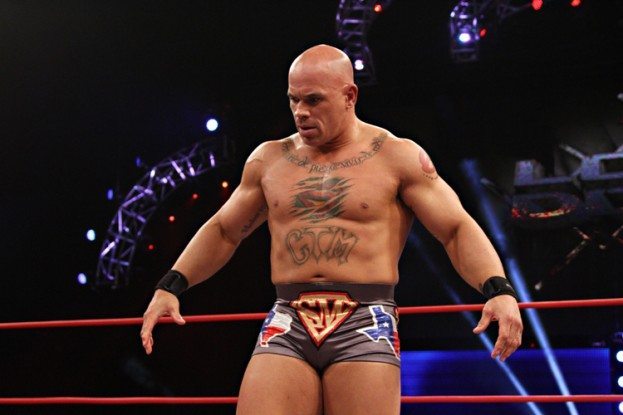 Will Shawn Hernandez Ever Return to Lucha Underground?