We’re about a month away from Slammiversary and for the most part the show hasn’t been brought up yet. Save for maybe a mention here or there, nothing yet has been announced. I’m sure you can figure out most of the card by this point though and things are ranging from interesting to not all that great. Let’s get to it.

The announcers talk about Lashley being the new #1 contender to the World Title.

We recap last week’s triple threat main event with Decay beating down Jeff Hardy so Lashley could get the win and the title shot.

Here’s Jeff Hardy to get things going by calling out Decay. Cue the whole team with Abyss talking about how Jeff’s devotion to the fans have made him weak. Steve says the same things so Jeff thinks the only way you can decay is when you die. “And that’s ok because I’m about to kill you.”

Rosemary implies that they were paid off to take out Jeff and that person will reveal themselves at the right time. For now the brawl is on until James Storm comes out for the save. Abyss is willing to destroy both of them for free tonight. Jeff: “Let’s pretend I’m the weatherman because there’s going to be a charismatic storm.”

Decay is defending and this is Storm’s guaranteed rematch since Roode is gone. That goes nowhere so it’s off to Storm for some clotheslines on Abyss before a Sling Blade gets two. Abyss drops Storm though and chokeslams Steve onto him for a near fall of his own. Storm raises a boot to stop a charging Steve and brings in Jeff for a Twist of Fate on Abyss. The Swanton is loaded up but the lights go out and Willow (Jeff’s old character) appears on stage. Gee, I wonder who is under the mask. A double mist from Decay sets up the Black Hole Slam on Jeff to retain the titles at 6:15.

We look at the end of last week’s triple threat and the post match brawl.

Mike Bennett and Maria Kanellis were at a Smashing Pumpkins concert last week and hung out with the band after the show.

Here’s Galloway for a chat. Drew is sick of Lashley and wants him out here right now. Lashley comes out and we get the traditional exchange of respectful greetings. We hear about how Lashley got into Kurt Angle’s head, which Drew says is Lashley’s game. He’ll try to get inside your head and then break you down physically, but Drew wants to fight tonight. Lashley says we can wait a week and leaves but Drew is going to fight tonight.

Cue Eli Drake to say it’ll never be over between the two of them. Drake is here to win gold and he’s going to win it all, even if he has to learn to do flips and win the Tag Team Titles on his own. Tonight though he’ll take that World Title and it’s time for a fight with a title match starting after a break.

Drew is defending of course. Drake starts choking and drops a leg for two before they head outside with Drew firing off chops. Back in and the Future Shock is broken up so Drew settles for a snap powerslam for two. Drake tries to bring in the briefcase but the referee takes it away. Instead it’s the Claymore to the face and the Future Shock to retain the title at 5:42.

Ethan Carter III wants a rematch with Mike Bennett and isn’t leaving the ring until he gets it.

Jade and Gail Kim are in Maria’s office and are going to be facing each other tonight. Maria wants a five star match like the ones that Davey M. guy is always talking about.

Here’s Ethan Carter, who makes sure to soak in some of the cheers before getting to his point. For over two years he was unbreakable, unbendable and unbeatable but now he’s just a man with a vendetta. Therefore, Bennett needs to fetch his wife and get out here to talk business. Maria loads up her name but Ethan dubs her Toots McGee and cuts her off.

Mike says he has a huge ego because he was the first man to beat the unbeatable. Ethan wants a rematch right now but apparently Maria has talked to Billy Corgan and there’s a new idea. Apparently Mike has a challenge for Ethan in the form of a road to redemption. We’ll start tonight inside Six Sides of Steel with Ethan facing…..someone.

We look back at Willow distracting Jeff Hardy earlier tonight.

Jade is defending and Sienna is at ringside. Gail takes it to the mat for an early headlock but Jade comes back with one of her own. A crucifix is countered but Gail counters the counter into an armdrag, followed by an exchange of hurricanranas. They shake hands until Jade gets in a German suplex for two. A cross armbreaker over the ropes has Gail in trouble but Kim sends her outside for a suicide dive. Sienna offers a distraction so Jade can get in a suicide dive of her own, only to have Sienna beat Jade down for the DQ at 5:30.

Result: Jade b. Gail Kim via DQ when Sienna interfered (5:30)

We go to Al Snow’s Wrestling Academy with a trainer torturing a student, which is how things used to be. Snow rants about how this is now the exception because it’s all about how the young guys get to come in and live their dreams without putting in any effort. Snow wants to be the Donald Trump of wrestling and make it great again, starting with Grado and Shera.

Ethan wants to know his opponent.

Snow gets him into a chase around the ring before grabbing a wristlock back inside. They head outside with Snow pulling out a foreign object for a shot to the throat. Pope: “The Sheik just texted me.” That’s only good for two so Snow chokes with wrist tape for two more. The fans chant for Grado as Snow hits the Snow Plow for two more. Cue Grado to break up another foreign object shot, allowing Shera to hit the Sky High for the pin at 5:27.

Jeff Hardy attacks Willow in the back and beats him down. After a break, Jeff is still at it until two more Willows attack him with the third giving him a Conchairto.

Video on Lashley vs. Galloway next week.

Inside a cage and the opponent is……Rockstar Spud. Carter hammers away to start and sends him into the cage a few times. Spud gets in a quick shot and chokes with his belt but he still can’t get out. Back inand Carter keeps beating him up until Spud tries a fast climb. Carter is actually kicked off the cage and Spud drops a top rope elbow for two. The beating continues with Spud going into the cage over and over before gorilla pressing him off the top of the cage. The 1%er puts Spud away at 8:24. 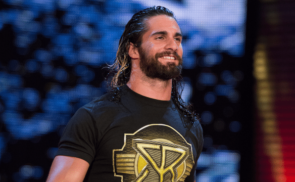 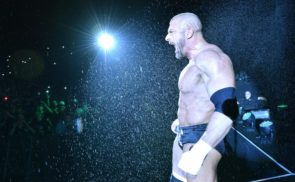