We’re getting close to the end of the UK tour and we have one more week before Kurt Angle’s farewell match. The big story here is Rockstar Spud turning on Ethan Carter III last week, costing Carter the TNA World Title against Matt Hardy. Tonight is going to be about Ethan’s revenge against Spud. Let’s get to it.

Angle starts in with armdrags and works on Roode’s wrist early on. Back up and a knee to the ribs drops Angle for a pair of two’s as they’re clearly going with a main event style formula here. Roode’s front suplex gets two more but Angle suplexes out of a chinlock. We hit the rolling Germans for a bit before the ankle lock goes on for the first time.

Post break, Roode praises Angle and James Storm comes out to do the same. Beer Money gets out the beer but give Angle a half gallon of milk instead. Angle isn’t done yet either because he wants to see Beer Money vs. the Wolves. Cue the Wolves to praise Angle before accepting the match against Beer Money next week. Storm says polish those belts up.

Here are Matt Hardy and company with something to say. Hardy brags about beating Ethan last week and promises that Ethan will never get another shot at the title. Tyrus is just laughably huge behind Matt here. Matt welcomes out Rockstar Spud, now in a leather jacket and missing his bow tie.

Spud doesn’t like the idea of his English fans cheering for Carter and asks for a show of hands of the people there for him when he needed help. We get some praise for Matt, who is the champion this company needs and deserves. Spud says they’ve gotten rid of the cancer but here’s Carter to interrupt. House is quickly cleaned and Spud is left alone with Ethan. The villains runs off but Carter challenges Spud to a fight tonight.

Gail Kim is going to call out Maria.

Post break Dixie Carter yells at Matt and company and refuses to sanction Ethan vs. Spud for later. They’ll still have the match but it’s going to be unsanctioned.

No DQ. Havoc goes right after Abyss to start and knocks him to the floor, only to have a trashcan pelted at his head. Abyss sends him into the apron and busts out the cheese grater but Havoc gets his hands up just in time. A table takes too long to set up though and Havoc gets in three trashcan shots to the head for a near fall.

Rosemary offers a distraction though and Abyss throws a chair at Havoc, knocking him off the top and through a table at ringside. The Janice shot misses and Havoc dropkicks Abyss through the table for two. Jimmy brings in the barbed wire board but charges into the Black Hole Slam onto it for the pin at 6:02.

Result: Abyss b. Jimmy Havoc – Black Hole Slam onto a barbed wire board (6:02)

Here’s Gail Kim to call out Maria. Gail talks about how this is wrestling and if Maria is really serious about changing anything she needs to put on a pair of boots and get in the ring. This isn’t about looking pretty or whatever Maria thinks it’s about because Gail was the one raising the bar inside Lethal Lockdown last week. Gail calls her out and here’s Maria with an answer.

Maria talks about Gail wanting to be famous because she married a celebrity chef and had the wedding televised. We hear about Maria being famous for being on Celebrity Apprentice, being in Playboy and working with Donald Trump. However she’s a lady so there won’t be a fight here tonight. Gail goes after her but gets jumped by Jade.

Bram and Eric Young are here for Young’s King of the Mountain Title defense but first of all they have to insult the British fans because none of them know how to fight. Young issues an open challenge.

King of the Mountain Title: Big Damo vs. Eric Young

Damo is a huge hairy man who looks like a cross between Rusev and a lumberjack while weighing well over 300lbs. A running dropkick puts Young on the floor (Josh: “People are already making memes about it!”) and Damo drops an elbow back inside. Back up and Young shrugs off some right hands, only to get slammed down for a backsplash. A powerbomb and another elbow get two on Young, followed by a cross body to crush him again. Damo tries another backsplash but hits knees, setting up the piledriver to retain the title at 3:40.

Galloway stomps him down in the corner to start but Maria offers a distraction. That goes nowhere though as Mike gets kicked in the face and sent outside for a throat first drop across the barricade. Bennett is sent into the post again but he gets in a shot to Drew’s taped up knee.

Back in and Drew gets kicked in the face for two and we hit the cross arm choke. Even more kicks to the head have Drew in trouble but he Hulks Up and punches Bennett down. A middle rope clothesline looks to set up the Future Shock but Drew settles for a spinebuster instead. Mike gets in a cutter for two but the Miracle in Progress is countered into the Celtic Cross. There’s the Claymore followed by the Iron Maiden (Drew’s crossface) but Maria breaks it up. Mike grabs a rollup and a handful of trunks at 7:56.

Result: Mike Bennett b. Drew Galloway – Rollup with a handful of trunks (7:56)

Grado promises proof that he was screwed.

We look back at Angle vs. Lashley I.

Preview for next week’s show.

Street fight. We see Carter coming to the ring from the back when Tyrus jumps him. Carter beats him back down but Matt runs in as well, only to have Carter shove them into the back of a truck and lock the door. This is joined in progress after a break with Ethan knocking him down the aisle and throwing him into the barricade.

They get inside for the first time with Spud choking with his shirt but Carter kicks him in the shoulder for a comeback. Back to the floor now and Spud tries a running chair shot to the face but Carter stops him with a raised boot. Carter hits the TK3 and loads up a table. Spud can’t crawl away in time and has to settle for a low blow. Some left hands don’t do much for Spud as Carter grabs the hand and powerbombs him through the table. A cobra clutch with a bodyscissors has Spud tapping until he taps out. Referees come out to break it up to end the show as this is a no contest (remember not an actual match) at about 9:00.

Result: Ethan Carter III vs. Rockstar Spud went to a no contest (9:00) 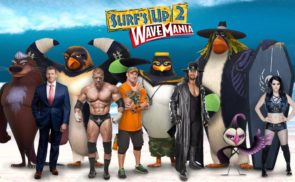 Sony Making Sequel to “Surf’s Up” With WWE Superstars