It’s the go home show for Slammiversary and the big question is what the heck Matt and Jeff Hardy are going to do after last week’s bizarre video from inside Matt’s barn with the fake baby and difficult to destroy table. Good or bad, it’s been a hot topic in wrestling ever since so they’re doing something right. Let’s get to it.

We open with a clip from Matt attacking Jeff.

Here’s Matt in the arena to a JEFF IS BETTER chant. Matt talks about how Jeff was jealous of Matt being World Champion so he had to be destroyed. That’s why you won’t see Jeff here tonight, tomorrow or on Sunday. However, before Matt can be whole again, he needs his World Title back. This brings out Drew Galloway, who Matt says would never be champion without Jeff’s help. Matt wants to be added to the main event of Slammiversary but Drew says no. Hardy calls him a coward so Drew agrees to defend the title tonight against Matt.

Winner gets Jade (at ringside here) for the title on Sunday. Allie offers an early verbal distraction, allowing Sienna to get in a few cheap shots from behind. Sienna starts working on the back but can’t hit the AK-47 (that spinning faceplant as dubbed by Dinero). Madison gets in a dropkick but a few shots to the back sets up the AK-47 for the pin and the title shot at 2:33.

Eli Drake is on a mountain and tells Bram to come get him.

Here’s Eli Drake for Fact of Life. Drake’s guest is….himself. Yeah last week he beat Bram because Bram is a dummy. He’ll be champion as long as he wants but tonight he wants to recognize some other champions so here’s Decay. Drake compares them to a basketball team and thinks Rosemary might be the hottest Knockout around under all that makeup. He asks how they’re going to take the BroMans apart on Sunday so Steve talks about all the evil inside them. Abyss says the BroMans aren’t beautiful and they’ll decay at Slammiversary.

Cue the BroMans and Raquel to say they want a fight tonight. A match is teased and it’s Grado and Mahabali Shera coming out as backup. Drake says they should be worried about the Tribunal and presses the DUMMY button a lot. The Tribunal comes out for the big brawl and Bram attacks Drake from behind as we go to a commercial.

Shera works on Drake’s arm to start and Eli bails from Bram in a hurry. Abyss comes in and hammers away on Bram before Steve bites his forehead. It’s off to Robbie for a beating from Steve and then another one from Baron Dax as Al Snow continues blowing his whistle. He’s a coach now you see. Basile chinlocks Robbie for a good while but Robbie gets up and brings in Robbie.

A quick BroDown drops Steve but Abyss makes the save as everything breaks down. Robbie gets in a nice dive before Bram starts cleaning house with knees and clotheslines. Grado gets in a Bionic Elbow on Drake but a frog splash only gets two. The referee is distracted though so Drake hits Grado low and does that knee lift/clothesline combo for the pin at 7:50.

Gail Kim wants to show Maria how serious this is. Ethan Carter III talks about how he wants to use the sword of redemption on Bennett this Sunday.

Lashley isn’t pleased with Matt getting a title shot tonight and promises to make sure things go right tonight. Matt says the title is his and Lashley just needs to understand that.

We see Ethan Carter III and Mike Bennett having a weigh-in. A fight broke out of course.

Not so fast yet as Maria is going to have Allie take her place. Allie screeches a lot until Ethan actually begs her to stop. Gail comes in to run Allie over but Maria trips her up to give Allie an opening. A double faceplant drops both women though and it’s a double tag to bring in the guys. The 1%er is broken up but Bennett is sent to the floor. Allie goes after Ethan to no avail so the guys run up the ramp. Back inside and Eat Defeat is broken up but Allie’s brainbuster is countered into a small package to give Gail the pin at 4:44.

Post match Sienna runs in and Gail gets a Conchairto on her leg.

Lee is defending and has Shane Helms in his corner. Eddie starts the fight on the floor but a Helms distraction lets Trevor stomp him down. A comeback is cut off by another distraction and Trevor stomps away again. Trevor’s atomic drop doesn’t do much as Eddie sends him outside for a plancha followed by a suicide dive.

Back in and Lee uppercuts him in the back of the head before a lifting German suplex gets two. Cue Andrew Everett for a distraction but Lee’s jumping knee only gets two. DJZ comes out for a save but Helms hits Eddie in the head with the title belt to give Lee the pin at 7:09.

Lashley comes up to Galloway and says he hopes Drew keeps the title tonight. Galloway talks about making Kurt Angle tap out so he’s ready for Lashley.

Callis powers him down in to the corner to start but Sutter punches him back. A few kicks to the ribs set up a jumping Downward Spiral to pin Callis at 2:10.

Sutter says he’s worked hard to get here and he’s going to take over. That’s no BS.

Ethan gives a fired up promo about the showdown with Bennett on Sunday.

We run down the Slammiversary card with Trevor Lee defending the X-Division Title against Andrew Everett, DJZ and Eddie Edwards added.

Video on Galloway vs. Lashley.

Drew is defending. Josh isn’t sure if Matt vs. Jeff will be happening because no one has seen Jeff, though we’ve seen Willow. They quickly head outside with Drew catching a charging Matt and tilt-a-whirl slamming him on the apron. A Side Effect onto the steps puts Matt in control though and a neckbreaker gets two back inside.

Matt bites the champ’s forehead and puts on his guillotine choke. Drew flips him over for the break and it’s time for some chops to make Matt’s chest red. The Celtic Cross drops Matt but he counters a superplex attempt, only to have Drew lift himself up and throw Matt off the top. The Claymore is loaded up but Lashley comes in for the DQ at 6:15.

Post match Galloway and Lashley fight to the back and the lights go out. They come back on and most of the fans (at least in the lower arena) are wearing Willow masks. Cue a bunch of Willows on the stage when the real Willow appears on screen to say Jeff will be free on Sunday to end Matt once and for all. Here’s Jeff to come out and stare at Matt, who is shocked by this for some reason. They brawl to end the show. 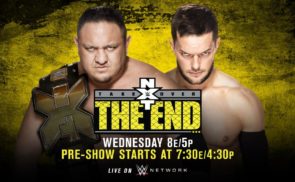 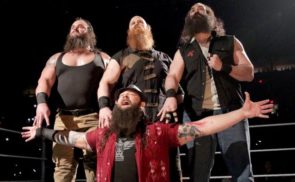