This is the debut on Fridays which will be their regular night. The big story coming out of last week is Lashley taking the World Title back from Bobby Roode and what appeared to be the formation of another heel stable as Eric Young turned on Roode and seemed to join forces with MVP, Kenny King, Samoa Joe and Low Ki. Let’s get to it.

We open with a recap of last week’s four title matches with Aries and Lashley winning the X-Division and World Titles respectfully.

Josh is in the control room and says we’re going to see this show in a way we’ve never seen before. It’s going to be more interactive and behind the scenes than ever before. Taz thinks the idea sounds cool. The two of them will be in various locations throughout the night.

Roode says nothing is more important than the title and Eric Young cost him the belt last week. He doesn’t know why, but he wants Eric Young one on one tonight.

Here are MVP, Joe, Low Ki, King and a woman I don’t recognize. Taz and Josh are in a booth and are shown on a split screen. MVP says you can’t keep a good man down and after a quick lane changes, he’s right back in the driver’s seat. He’s always known it was him against the world since the day he started wrestling. He knew he had to surround himself with people he knew, so he went to the family. These men traveled the roads with him 500 miles a day for a hot dog and a handshake. They are known as the Beat Down Clan and they’re “nobody to F….mess with.”

MVP introduces Young but emphasizes that he is not part of the BDC. The fans tell Eric that he sold out, but he’s all serious and says that doesn’t matter. Young, with a haircut, says MVP did something for his family that made Eric change his opinion. Eric had a brother once. He took care of Roode and even gave him one of the first title shots. Where was his title shot when Roode won the belt? Maybe Roode was afraid of losing again, because Young is a world class man and friend. When Young was laid up, he only got a text message from Roode, but MVP called him up and told him the truth.

MVP says he planted a seed in Young and it grew to a sequoia. Now it’s time for the World Champ, but Lashley doesn’t come out to his music. MVP introduces him again but gets Kurt Angle in wrestling gear, sporting a big knee brace. He says Young is going to pay for his sins tonight when Roode gets his hands on him. Angle promises to make every one of them tap. Joe gets out of the ring and gets right in Kurt’s face but gets a punch to the jaw. The entire BDC gets in his face but security breaks it up. Angle wants Joe right now and apparently that’s good enough.

This is joined in progress after a break with Joe working on the knee and slapping on a leg bar. He switches it up to something like a figure four as we go split screen to see a producer trying to find Lashley but there’s no one in his dressing room. Angle escapes the hold and starts rolling the Germans. Joe shrugs it off and hits the corner enziguri, only to have the Clutch countered into the ankle lock. That’s quickly escaped as well but the Angle Slam gets two. There’s the ankle lock again but this time the roll through takes out the referee. A low blow sets up the Clutch and Angle taps at 6:15 shown.

The BDC comes in to beat Angle down but Roode makes the save with a chair.

Back from a break with Roode sitting in the ring in the chair. He says this has already gone too far, which the fans agree with due to their ROODE GOT SCREWED chant. He’s been here a long time and this ring is his home. Roode may live for wrestling, but tonight in New York City, this is about payback.

Taz and Matthews are in the booth again to talk about Impact: Unlocked tomorrow morning about 10am. This is a behind the scenes look at TNA, including power rankings and special features like this. We see an interview with Magnus, talking about doing this to provide for his family. His son looks up at him and he wants to make him proud. Another clip says he’d be fine with being a free agent in a market like this.

We look at JB getting his hair shaved last week.

Spud apologizes to JB but Borash isn’t really upset. He knows Carter will get what’s coming to him one day.

The Revolution is in a balcony to watch the next match.

Winners get a title shot against the Revolution. Matt and Eddie get things going with the Hardys quickly taking over, allowing for a tag to Jeff (big reaction). A nice headscissors takes Davey down and a double belly to back suplex gets two. The Hardys hit clotheslines from either side but everything breaks down and the Wolves send both Hardys into opposite corners with Matt getting tied in the Tree of Woe.

A drop toehold from Eddie sets up an elbow to the back from Davey for two. Davey fires off the kicks in the corner but misses the top rope stomp, allowing Matt to hit the Side Effect. It’s off to Jeff vs. Eddie as everything breaks down again. The Wolves throw Matt to the floor but he DDTs both guys down. Jeff is next to a different corner so he walks across the top rope (think Old School or Elix Skipper’s cage walk) to get to the other corner and dive on everyone else.

Back in and the Swanton hits Eddie’s knees and ReDRagon’s Chasing the Dragon (with a Falcon’s Arrow instead of a brainbuster) gets two on Jeff. The Hardys make a blind tag and Eddie takes another Side Effect. Jeff gets crotched on top and Eddie hits a Twist of Fate for two but Jeff Swantons in for the save. Poetry in Motion hits Eddie and the Twisting Stunner sets up an elevated Twisting Stunner for the pin at 10:00.

Next week is Feast or Fired and Bram says he’s going to feast.

Eric Young is worried about Roode coming for revenge.

Ethan Carter III and Tyrus take over the production booth. Carter: “Ground control to major bald please.” They want the cameras on Jeremy Borash and we see his mostly bald head. Carter knows JB thinks he’s Heisenberg and tough now, so how about they have a match next week. JB has thirty minutes to decide.

No DQ and it’s a brawl in the aisle to start. Taz sums up the feud in simple terms: “The guy in the green screwed over the guy in the black and the guy in the black is ticked.” Back from a break with the fight in the crowd and a split screen showing Lashley going into his dressing room with no comment. Young takes it back to ringside and stomps on Roode’s head before chopping him against the barricade.

More forearms stop Roode’s comeback attempt and Young throws in two chairs, wedging one in the corner. Back in and Roode fires off some right hands before nailing a nice spinebuster. The Roode Bomb onto a chair is countered and Young sends him head first into the corner chair. A piledriver onto the chair is enough to pin Roode at 10:11.

MVP comes out and says maybe someone will visit Roode in the hospital.

Aries says it’s a battle to keep his X-Division Title tonight. If you back him into a corner, he’s going to get really dangerous.

We recap last week’s battle royal with Awesome Kong returning for the showdown with Havok.

Brooke is mad about what Robbie said after how he performed on the Amazing Race.

All three BroMans are at ringside. DJZ takes a quick picture and we instantly see it on screen. Adams hammers away on Angelina to start before taking Velvet down by the arm. Terrell comes in for a suplex and the Beautiful People are dropkicked to the outside, setting up Taryn’s bit dive to take out everyone on the floor. Back in and a middle rope clothesline drops Velvet, but Robbie gets on the apron to distract Brooke, letting Velvet grab a rollup with a handful of tights for the pin at 2:30.

Result: Beautiful People b. Brooke Adams/Taryn Terrell – Rollup with a handful of tights (2:30)

Post match Kong appears to destroys the Beautiful People and DJZ. Havok comes out for the showdown but security breaks it up.

JB turns down Carter’s challenge but Carter says JB is TNA. He should take the challenge because no one respect him. JB snaps and says he’ll fight Ethan next week.

Taz and Josh are going to preview something for next week.

Manik tells a camera to follow him. They go to see James Storm, who tells Manik to leave them. Storm says it’s time for the world to be introduced to his newest disciple: Koya (formerly Mahabali Shera). Koya means lost in Hindi, but now Koya has been found. Next week, the world will see what he is capable of.

Video on Feast or Fired. It’s something like Money in the Bank with four briefcases, one for a shot at every title (other than the Knockouts) and one with a pink slip.

The BDC is at ringside. Aries took the title from Low Ki last week. The champ starts fast by backdropping Low Ki over the top but Ki’s feet get caught in the ropes to make the crash even worse. Back in and Aries gets two off the Pendulum Elbow and the Last Chancery sends Ki running for the ropes. Low Ki bails to the floor for a breather and meeting with the BDC.

The advice works as Aries’ suplex is countered with Low Ki dropping him over the ropes. A big chop gets two but also ticks Aries off, causing him to fire off even harder chops of his own. The discus forearm sets up the running corner dropkick, but Ki knees out of the brainbuster. Austin crushes the knee and hooks the Last Chancery, only to have the BDC get on the apron. The referee misses Ki tapping out and the BDC gets on the apron, with MVP crotching Aries. Ki gets up and Ki Crushes his way to the title at 6:48.

The BDC is still in the ring and call out Lashley. The champ comes out this time and MVP takes credit for everything Lashley has done. He makes the mistake of saying the title belongs to the BDC but Lashley isn’t cool with that. MVP says Lashley owes the team some thanks but Lashley turns to walk away.

MVP goes to stop him but Lashley tells Hassan (MVP’s real first name) to let him go. That’s ok with MVP, who brings up their time together in WWE. He wants one hug for the road though, which Lashley reluctantly gives. MVP kisses him on the cheek and the beatdown is on. Lashley gets hit in the face with the belt and MVP leaves with the title.

Make sure to join us for Monday Night Raw on Monday at 9pm EST.

Remember to follow me on Twitter @kbreviews, check out my website at kbwrestlingreviews.com and pick up my new book on the History of Saturday Night’s Main Event at Amazon for just $3.99 at: 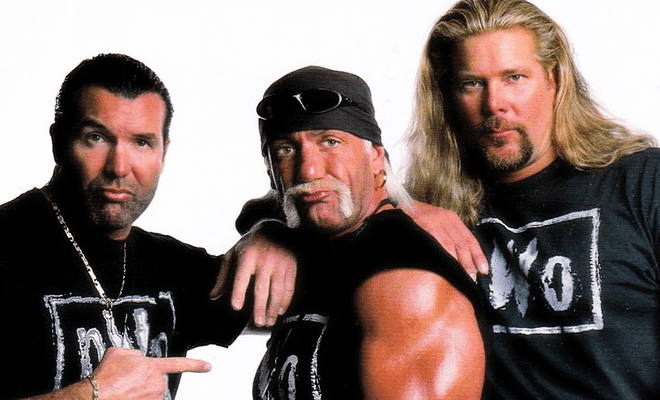