It’s the second week of Impact on Tuesday nights and Ethan Carter III is the World Champion again. That means it’s time to find a new opponent for him after Matt Hardy was completely dispatched last week in his third loss to Carter in a row. Other than that it’s hard to say what to expect here, though we are getting Drew Galloway vs. Kurt Angle in a dream match. Let’s get to it.

We open with a recap of last week’s tournament matches, leading to Carter getting the title back.

Quick video on Angle vs. Galloway.

Here are Ethan and Tyrus in the ring with something to say. Ethan talks about how this is more proof of how great he is. He thanks Tyrus for letting him fight on his own last week but Tyrus says he didn’t doubt Ethan for a minute. That’s enough from Tyrus as Ethan takes the mic away from him, which doesn’t sit well with Tyrus. Ethan keeps going about how great he is until Jeff Hardy comes out in wrestling gear.

Jeff thanks Ethan for his effort last week but Ethan says he’s done with both Jeff and Matt. No Ethan, no you’re not, because you can never be done with the Hardys around here. Jeff says Matt can speak for himself and hands Ethan a document. It’s a note from Jeff’s doctor, saying that he’s cleared to wrestle.

That’s fine with Ethan but he doesn’t think Jeff deserves a shot that quick. Ethan thinks we need an opponent from the back right now. Here’s a masked man, with Ethan making sure to play some music for him. The man is named Shynron (a high flier, probably best known in Chikara) and he promises to take care of Hardy right now.

Ethan sits in on commentary as Shynron grabs a wristlock. Jeff dropkicks the masked man in the back to put him on the floor but something like a 619 over the apron takes Jeff down again. Back in and the Twist of Fate is broken up but a Tajiri handspring into a moonsault results in a crash. Jeff throws him up for a powerbomb but drops back for a crash. The Twist of Fate puts Shynron away at 2:23.

The Dollhouse says they’re ready for Gail Kim and Kong promises to come for the title soon. The Beautiful People come in and promises to take down the Dollhouse tonight. A brawl breaks out.

It’s Kong/Jade vs. Rayne/Sky. This is joined in progress after a break and is officially a street fight. The Dollhouse is in control until Velvet suplexes Jade on the stage. Back inside, Kong is running over Madison like she’s not even there. We get some choking on the ropes as Jade starts bringing in some weapons. Jade misses a Cannonball in the corner and hits a chair by mistake but she’s still able to hit Madison in the back with a trashcan lid while Kong chokes her in midair.

Velvet gets back in and kicks a chair into Kong’s face but Rebel and Marti Bell realize they can get involved. That earns them a double beating with kendo sticks and Kong gets one to match. Not that it matters as Jade comes back with a package piledriver to put Madison away at 6:10.

Here’s Beer Money for a reunion celebration. James talks about how much fun they love to have and how he’s back to make a living for his family, but also to have fun. Roode says the thing that split them up in the first place is the reason they’re back together. One of them is from the country and one is from the city and they’re both sorry for what they did.

Storm is sorry for all the times he kicked Roode in the face and all those bar tabs he left Bobby to pay. Roode is sorry that he broke a beer bottle over Storm’s head, which causes Storm to pour Roode’s beer into a plastic cup. Bobby cuts it off and toasts the fans but says something is missing. There’s not enough fighting going on here so here are Eric Young and Bram to interrupt. Young rants about wanting to hurt Roode even more and says he likes the way Bram thinks. Eric wants the King of the Mountain Title back so Roode says let’s do it right here and right now.

King of the Mountain Title: Bobby Roode vs. Eric Young

Roode is defending and takes Young down with an armbar to start. There’s a big stain from all of the beer before the break. Young quickly takes him down and grabs a chinlock which only lasts a few seconds. A belly to back suplex keeps the champ down but he blocks a middle rope elbow by raising a boot. A t-bone suplex sends Young flying, only to have him grab a belly to belly for two.

Roode slaps on a Sharpshooter, which he quickly drops down into a Crossface. A spinebuster gets two for the champ but Bram pulls the referee out. Storm spits beer in Bram’s eyes and the Englishman is taken down with a double suplex. The distraction lets Eric kick Roode low and piledrive him for the pin and the title at 7:42.

Ethan and Tyrus run into Michael Bennett and Maria in the back. The newcomers congratulate him on the title win but aren’t pleased when Ethan seems to blow them off. Bennett thinks the title looks good on Ethan’s shoulders, for now.

We look back at the Bound For Glory main event and the fallout that lead to the tournament, including Ethan getting the title back.

It’s time for the debut of Anderson’s talk show, complete with cheesy piano music. The first guests are Matt Hardy and his family, minus Jeff that is. For some reason Matt isn’t allowed to sit on the couch next to his wife and son because he gets to sit in a folding chair. Anderson gets right to the point by saying Matt choked last week.

Of course this doesn’t sit well with Matt as he brings up winning at Bound For Glory. He thought he had Ethan last week but Anderson calls him out for making excuses. We move on to Jeff, who Anderson thinks is doing Matt’s dirty work for him. Matt gets to the point: he wants one more match with Ethan and promises to win the title. That’s it for the Hardys with Reby giving a glare back to Anderson as they leave.

Drew Galloway is in the crowd for storytime. Drew makes a guarantee to all of the fans here and at home: tonight will be an absolute spectacle in celebration of one of the best of all time.

Young and Bram celebrate their win and promise to get rid of Beer Money again.

Here’s Ethan (again) to ask Matt what he’s got to offer. This brings out Matt (again), who talks about Ethan getting his spot because of his last name. Matt knows he can’t offer any materialistic possessions, so he’s willing to put his career on the line. Ethan agrees, as long as it can be last man standing. The deal is made.

Feeling out process to start until Kurt suddenly throws it into high gear with an overhead belly to belly. We’re in an early chinlock for a bit before a double clothesline takes us to a break. Back with Drew hammering away in the corner, only to miss the Claymore and walk into the rolling German suplexes.

The Angle slam gets two so it’s off to the ankle. It’s only the first ankle lock though so Drew is quickly out and hitting the Futureshock for two. Off to another ankle lock but Drew rolls him out to the floor. Another suplex gets another two but the Claymore connects out of nowhere for Drew’s second near fall. There’s another Claymore for another two as the fans are starting to really get into this. 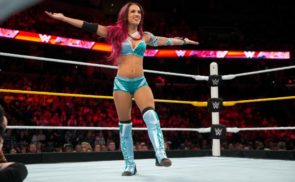 Sasha Banks Will Be Out Until February