They’re here! Tonight is the first time we’ll be seeing Global Force Wrestling talent (other than the Jarretts that is) on TNA TV. With Bully Ray out of action, Jeff Jarrett has offered to be in charge tonight and have the GFW talent come in and help out for a night. Let’s get to it.

Here are the Jarretts to open things up with Jeff being so thankful that he answered that call from TNA management. He left TNA on a positive note and has founded Global Force Wrestling, which is about competing at the highest level. Everyone can connect to competing and tonight is all about creating a new rivalry. Tonight is about the best of the best squaring off and Jeff runs down the card, including a dream match between Trevor Lee/Brian Myers (Curt Hawkins) vs. the Wolves.

The main event is the King of the Mountain match for the vacant title, but here’s Eric Young to protest. Young says he doesn’t care about the fans but declares himself God because he’s decided the fate of the World Title not once but twice. He took a war hero’s leg because he felt like it, so Jeff can be the promoter and bookerman and put himself in a match against Eric for the King of the Mountain Title.

Jeff says he isn’t a wrestler anymore so he won’t be defending the title here. This title isn’t just going to be defended in Global Force or TNA, because it’s going to be defended around the world. If Young wants in on the first King of the Mountain match, he’s in. Young is happy but beats down Jeff anyway, but here’s the GFW roster for the save. The TNA roster comes out and it’s a big brawl.

Post break the GFW guys are all upset but Jeff comes in to say this isn’t an invasion and they need to just go win their matches.

Josh acts like Tapa is someone most of us wouldn’t know. Tapa’s manager Royal Red is nice enough to introduce himself (“My name is Royal Red”) before going on about how awesome Tapa is. They ram into each other to start with Kong getting the better of it off a corner splash, followed by a cross body for two.

Pope brings up Barbarian being Tapa’s uncle as Kong gets two off a splash. Tapa comes back with a Samoan drop for two but Kong fires off strikes to the head, capped off by the spinning backfist. A chokeslam drops Lei’D and a clothesline puts her on the floor. Kong gets pulled outside as well and it’s a double countout at 4:42.

PJ Black (Justin Gabriel) and Drew Galloway are in the King of the Mountain match.

Black is ready for the match but has to take a phone call.

Drew Galloway is going to stand up for TNA and himself.

Here’s Bobby Roode to talk about how insane everything is here, but he’s ticked off. Roode isn’t happy with not being in the main event already, so if Jarrett has a problem with him, come say it to his face. First though, Roode would like Rockstar Spud to come out here. Roode says Spud must be proud as a peacock after his win last week but Spud looks worried. Last week, Spud showed that anyone can defeat anyone at any time, “even little old you Spuddy.”

Roode doesn’t like Spud talking like that and says he’d take Spud out where Aries failed. That’s enough for Spud who drills Roode in the face, only to get his head taken off by a clothesline. Roode chokes Spud with his shirt and beats him on the floor until we go to a break.

After a break, Jarrett and Roode yell at each other in the back until Roode says Jeff isn’t his boss anymore and tells him to get out of his face.

The winner is in the King of the Mountain match. Godderz won’t let Lashley pose on the ropes so Lashley press slams him with ease. Jesse bails to the floor to avoid the spear as the announcers talk about Ronda Rousey. Back in and the running shoulder in the corner has Jesse in trouble and a delayed vertical suplex with one arm makes things even worse.

Jesse gets in a nice dropkick and drive some forearms into the face. He makes the mistake of trying a hold on the mat though, allowing Lashley to pick Jesse up and throw him down. Some rolling suplexes have Jesse reeling but the spear is countered by a powerslam for two. The Adonis Lock is easily countered though and the spear sends Lashley to the main event at 5:45.

Drew Galloway is unconscious in the back, in the same place where Bully Ray was laid out.

Dixie Carter is with the Jarretts and the three of them think someone is trying to take down the companies working together. Jeff will fix the main event.

Here are Ethan Carter III and Tyrus with something to say. Ethan talks about this title representing a culmination of his life’s work and that it proves he’s better than anyone in any locker room across the world. Last week he defended the title in a car crash after Matt Hardy caught lightning in a bottle. Ethan denies sucking because he defends this title in God Mode.

Cue Matt Hardy for a retort. Matt says Ethan has a claim of being the best in the world right now, but he won’t take his eyes off Carter until he wins the title. No one knows more about dusting yourself off and marching forward than Matt Hardy because he will not die. Ethan respects Matt for hitting him harder than anyone else ever has, but the people will get to decide if Matt gets another shot. This ends as you would expect, with Matt having a belt bounced off his face.

Taryn Terrell tells the Dollhouse to beat Gail Kim in a cage match.

Christopher Mordetzky (Chris Masters) is in the King of the Mountain match for no given reason and says he’ll win.

Non-title and Lee is an indy regular. Davey and Myers start things off and the Wolves quickly take over with their precision double teaming. The Wolves send them to the floor for a pair of baseball slides and suicide dives as this is one sided so far. Back in and Lee gets in a shot on Eddie to take over, allowing Myers to slap on a chinlock.

A double hurricanrana puts Myers and Lee down, setting up the hot tag to Davey. We get the dropkick to make Lee DDT Myers from Davey before he slugs it out with Lee. Myers plants Davey with a Downward Spiral into a German suplex from Lee, only to have the throw into the kick and powerbomb/backstabber combo take out Trevor for the pin at 6:24.

Lashley says of course he can win tonight but he’s also here to defend TNA, which no one is talking about.

Non-title. The fans are behind the former TNA mainstay Dutt. Tigre gets in a quick kick to start and ties up Dutt’s arms into his legs, setting up a running dropkick on the mat. Back up and Dutt hurricanranas Tigre out to the floor and does it again on the outside. A springboard splash gets two for Sonjay and it’s time to go for the mask. That goes nowhere so Dutt takes him to the top and poses, allowing Tigre to roll through into a sunset flip for the pin at 3:36.

Jeff comes up to Ethan in the back to praise him, but Ethan claims it’s a sham. Jarrett suggests that Ethan watch the main event, because the winner gets a title shot next week.

Mr. Anderson says the microphone doesn’t define him but it does define his success. It was on that very spot where Bram attacked him, but he’ll go home when he’s ready. Today isn’t that day, because next week it’s a microphone match, which means mic on a pole minus the pole.

Next week is Turning Point. This would be their second special in three weeks.

King of the Mountain Title: PJ Black vs. Chris Mordetzky vs. Lashley vs. Eric Young vs. ???

The title is vacant coming in and the mystery replacement is…..Robbie E. The rules here are complicated, as it’s a reverse ladder match where you have to hang the belt in order to win. However, before you can do that, you have to qualify by getting a pin or submission. Whoever is pinned or submits is sent to a penalty box for two minutes, meaning there could be some strategy involved.

Lashley spears Young down for a pin in less than thirty seconds to qualify and send Young to the penalty box. Black does the same to Chris off a top rope sunset flip to make this a three way for now. Lashley cleans house but charges into the post, allowing E. to nail him with a top rope clothesline. Another one from PJ looks to get a pin but Black and Robbie get in a fight.

The Boom Drop is enough to pin Black and Robbie is eligible, only to get speared down to give Lashley another pin. Lashley is the only person not in the box at the moment but Young and Chris get out to keep Lashley from winning in four minutes. Back from a break with Lashley being sent to the floor, allowing Mordetzky to roll Young up for the pin, meaning only Young isn’t eligible.

Mordetzky puts Lashley in the full nelson but Robbie dives off the box to take them both down in a completely unnecessary spot. Robbie and Black chop it out on the floor and Young gets out of the cage as we have a ladder brought in. Young piledrives Robbie on the steps for the pin and all five are now eligible. Black stops Mordetzky from climbing the ladder but Lashley comes in and cleans house, only to have Young stop his climb.

Eric starts cleaning house with the title but Black springboards in ala Shelton Benjamin for a slugout on top of the ladder. Lashley spears Young down but Black would rather hit the 450 (meaning knees to the chest) on Lashley before climbing up and hanging the title for the win at 14:58.

Ethan comes out to pose with his title to end the show. 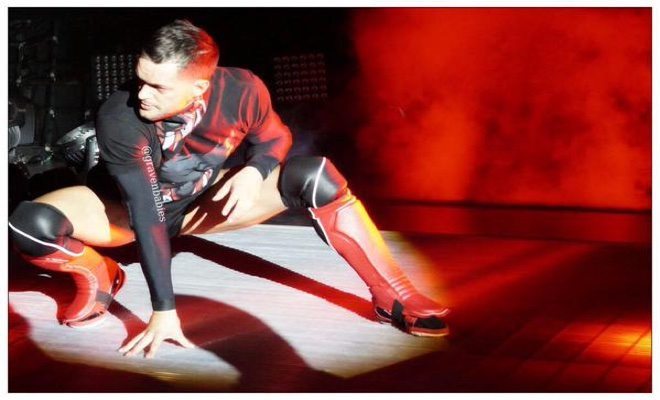