It’s back to the pay per view pile for Impact and in a way, that sounds like a good thing. When Impact Wrestling cuts out all of the other nonsense and focuses on the wrestling alone, they can have a heck of a show and hopefully that is what happens here. Sometimes you don’t need to do anything more than have a bunch of good wrestling and under the right circumstances, this could be quite the show. Let’s get to it.

Unless I missed it before, this was added to the show on Tuesday night. I’m not sure how much more gas Shamrock has in the tank but his intimidating look alone should be worth something. I can’t imagine that he’s going to be around long term but he has enough star power to validate keeping him around for the time being. That being said, Fulton has a lot of potential as a monster and Shamrock could make for a good opponent.

Shamrock is in good shape: 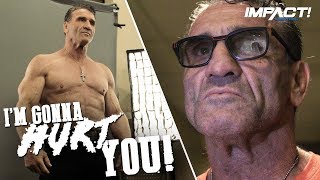 I’ll go with Fulton here because he has a brighter future and there is no reason to put Shamrock over him. Shamrock is already a legend and a former World Champion so putting him over Fulton doesn’t make sense. Then again, if there is one thing this company loves to do it is push older people for no logical reason. I’ll take Fulton, but there is a bit of fear in the back of my head over the whole thing.

This is one of those formulas that works almost every time: take two people who can hit each other really hard and see who is left standing. It’s also a battle of the spears, with Rhino’s having more impact but Moose’s having the more clever name. Moose is in need of the big win but I’m not sure how much value there is in putting him over Rhino. That being said, I can’t imagine Rhino getting a big win on this stage.

So yeah of course it’s Moose here, as it should be. Rhino is someone who still has some name recognition and now that they’re getting him away from the ECW tributes, you can see why he’s been around as long as he has. This could be a good ten minute power brawl and Rhino can still bring it in that style. Have some fun and get the right person over and everything works out.

This was the match that I was looking forward to more than any other on the card as Mack and Swann have turned into a heck of a team against a dark horse contender for the Tag Team Of The Year in 2019 in the North. Then Swann sprained his ankle last night and is unlikely for the match, meaning the whole thing is pretty much forgotten about as Mack is probably wrestling it in a handicap match.

They have a game plan:

Therefore, the North retains here and we probably get the big title match in SEVERAL weeks on Impact, assuming it happens at all. Given their marathon taping sessions, there is almost no way we’re going to be seeing Swann in the ring for months as far as Impact taping time goes and that’s a shame because he seemed ready to jump way up the ladder in the coming weeks, starting with a title win here. But alas, the North retains here (hardly a bad thing as they’ve been excellent).

I was completely sold on Grace ending the record long reign here, but then ODB was added to it and things started trending down (as they tend to do when she is added to almost anything). They now have an out to keep the title on Valkyrie (again: not a bad thing, which seems to be a Canadian trait), even though it is time for someone else to get into the title picture. I think you know where this is going.

They aren’t getting along:

I’ll play it safe and say that Valkyrie retains the title, likely by defeating ODB. Maybe they can even throw in a bonus by having Grace hit the Grace Driver so Valkyrie can steal the pin. I’m not entirely sure why ODB needs to be involved in this, though if it’s to give her a hand after her food truck burned down, I can get over my lack of caring for her. Anyway, I’m not thrilled about this one, but Valkyrie is likely retaining to lose to Grace in a singles match later.

I wasn’t big on Van Dam returning as he is way past his prime and has been around for so long that a lot of the luster is gone. However, I’ve dug the heck out of his crazy self-absorbed heel character as he’s selling the heck out of it. While I could go for a little less Katie Forbes, Van Dam’s stuff has been great and I’m enjoying his promos more than I have in years.

Van Dam has quite the legacy:

As for the match…..dang I’m not sure. This is the kind of thing that should be Cage in a walk but Van Dam has been so awesome in everything he’s done that it could go either way. I think I’ll actually take Van Dam, just for the sake of giving him something else to talk about. Cage shouldn’t be losing again, but they’ve got an intriguing match here, provided they can make the in-ring stuff work.

This is basically Money In The Bank but for any title, which very well could play a role later in the show. The idea here is that Elgin wants the World Title and is willing to take shortcuts to get there. He already beat Edwards in a rather good match on Impact and now he wants to do it again for the trophy. I like the idea of having to defend the thing, even though it has barely been mentioned since Edwards won the thing.

Stop me if you’ve seen this before:

I’ll take Elgin to win here, even if it’s two big losses in a row for Edwards. The good thing about him is that he’s almost bulletproof in Impact and that doesn’t seem to be changing anytime soon. Elgin on the other hand seems to be in a place where he needs to win the World Title or find something else to do, and winning the Trophy could get him a big step closer to being champion.

There aren’t many people who have been as bizarre as Austin in recent months. He’s gone from apparently being an adult actor to hitting on Miguel’s mom while also winning the title. I’m not sure which of those is weirder, but here we are with one of the first actual stories about the title in months. That might not be the best story in the world, but at least it’s something for a change.

Somebody call his mama:

I’ll go with Austin retaining here, partially because I like him and partially because I want to see Miguel’s mom turn on him. It would be hilarious to see if nothing else, though I do need to see the Rascalz get somewhere sooner or later. This very well may be where it takes place, but I’m not sure if that’s what’s going to happen. Give me Austin to retain, though I’m not very confident in it.

And then, as usual, something has to happen to mess everything up around here. In this case it isn’t Impact’s fault, but that never stopped the bad news before. In this case, Blanchard seemed all primed and ready to win the title but then there was yesterday’s Twitter fiasco that might cause some major issues for the company should they give her some big push.

You’ve seen this one before: 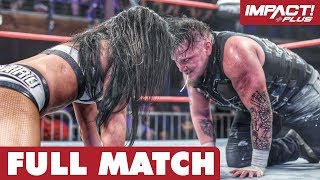 That being said, I’ll go with Blanchard winning and then Elgin cashing in his newly won trophy for an immediate title shot. Therefore, Blanchard gets her win, a Canadian gets to be World Champion and we can move forward to Blanchard chasing the title again after things have cooled down a bit. It’s not the smartest thing in the world, but it’s the most protection they can have at the moment.

I was looking forward to this show a lot more about thirty six hours ago before the Swann injury and the Blanchard drama but you should know better than to expect something like this to work out well. It really does feel like the company is cursed at times and even when they have been doing so much better as of late, it doesn’t seem like they can ever shake off the curse that follows them everywhere. 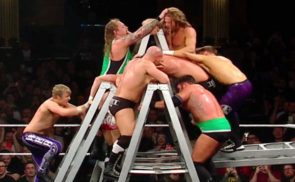