It makes things bigger. We are less than two weeks away from WrestleMania 37 and that means most of the card is already set up in advance. The show is going to be taking place over the course of two nights for the second year in a row, meaning that both nights are going to need to be built up with a lot of special features. One of the matches that has already been set up is receiving a little sweetening.

One of the matches taking place at WrestleMania will include Shane McMahon and Braun Strowman. The two have been having issues for weeks now, mainly focusing on McMahon calling Strowman stupid. This has not gone well for Strowman, who has managed to get a match with McMahon at the show. McMahon has even allowed Strowman to pick the stipulation, which he did this week.

During this week’s edition of Monday Night Raw, Strowman announced that the match between the two will be held inside a steel cage. The decision was made following a post match attack from McMahon’s associates Jaxson Ryker and Elias, with Strowman wanting to make sure that the match is one on one. McMahon has wrestled in a cage match at WrestleMania before, losing to the Undertaker inside Hell In A Cell at WrestleMania 32.

This has been set up pretty well. Check out how we got here: 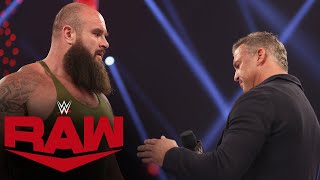 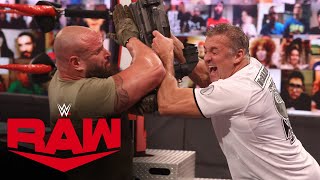 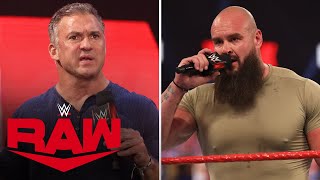 Opinion: This is at least something to help build up what has been an otherwise uninspiring story. McMahon calling Strowman stupid and mocking him as a result is hardly the most thrilling idea for a feud and I’m not sure how much interest there was going to be otherwise. The cage is at least something you don’t see too often at WrestleMania and maybe it could work out well.

The Hurt Business Breaks Up On Monday Night Raw