Hit It Again. WWE Is Having A Major Pay Per View Rematch With A Fresh Gimmick At Crown Jewel.

I guess they have to follow it up. The ending of the Hell In A Cell match between Bray Wyatt and Seth Rollins is being called one of the worst developments in the history of WWE. I can’t blame fans who say this as the match was not well received and was treated like something that WWE did to get out of every problem they themselves caused. Couple that with the match ending in a referee stoppage and there was almost no way to believe what they had set up. As it turns out, we still are not done with the feud.

During this week’s Monday Night Raw, a rematch between Rollins and Wyatt has been set for Crown Jewel in a Falls Count Anywhere match for the Universal Title. This comes after Wyatt was defeated in the Cell due to a referee stoppage after Rollins used a variety of weapons to destroy Wyatt with a sledgehammer being the point of no return for the referee. After the match was over, Wyatt attacked Rollins again and took him out, leaving Rollins bleeding from the mouth to end the show.

They weren’t done yet. Check out the follow up from last week’s SmackDown: 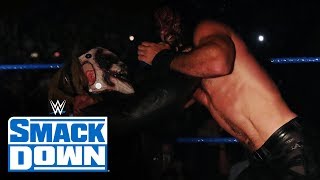 Opinion: I’m not sure what to think about something like this as there isn’t exactly much of a good way out of something like this. Rollins winning the first match was a stretch and did a lot of damage to the Fiend, but Rollins winning again would be devastating to his future. That being said, I can’t imagine Wyatt winning the title as it would put both World Titles on SmackDown. It isn’t something that is going to go well for either side, which is exactly why WWE has a lot of the problems they have at the moment. They can’t figure this stuff out beforehand?

How do you see the match going? Who do you see leaving as champion? Let us know in the comments below.

Go For The Silver. Here’s What Happened On Monday When The Raw Tag Team Titles Were On The Line.

(VIDEO): Sick Burn! The Firefly Fun House May Have Come To An End On Monday Night Raw.