Can you blame her? The wrestling world has been turned upside down because of the spread of the Coronavirus. Just like a lot of people outside of the business, a variety of wrestlers have not been able to travel very much, which can make it a problem to make it to the limited amount of wrestling events taking place. WWE has wrestlers coming in for their regular shows, but one is not there for a reason.

Over the last few weeks on SmackDown, Paige has been targeting Bayley over some of Bayley’s comments. Bayley has not been positive about the women’s division, saying that she is better than anyone in the past, present or future. Paige appeared via Skype on this week’s SmackDown, which came a week after she was announced as appearing. The original plan called for Paige to appear in person but there is a good reason she was not there in person.

According to Wrestling Observer Radio, the reason Paige did not appear in person was she was not willing to make the trip to Orlando. This is something that has been the case for several wrestlers in both WWE and AEW, with neither company punishing them for not appearing. Several parts of the United States have been placed on lock down in an attempt to slow the spread of the virus.

Paige did appear on the show. Check out what she did on SmackDown and the fallout:

Opinion: I can’t say I blame Paige whatsoever on this. Nothing is normal at the moment and it makes sense for Paige to not want to come all the way across the country. Travel is one of the worst things that you can do at the moment and since Paige is not allowed to get physical in the first place, it’s not like there is much of a difference in having her on tape instead of there in person.

Did you like the segment? Will Paige ever wrestle again? Let us know in the comments below.

Which WrestleMania Match Was Planned Before Everything Else 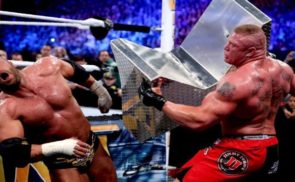