Hopefully it isn’t too bad. Wrestling is a rather unique sport but there is one major similarity to all others: the athletes can get hurt. It can be out of nowhere or it can be built up over time, but it can happen to anyone. Just because someone is hurt though, it doesn’t mean that they are going to miss time. That seems to be the case with one of the bigger WWE stars at the moment.

According to Wrestling Observer Radio, Braun Strowman is currently working hurt with an undisclosed injury. While the specifics of the injury are not known, the injury is said to be taking away Strowman’s speed, which could mean a knee or leg injury of some sort. Strowman does not have a match scheduled for Extreme Rules but he does have a falls count anywhere match against Bobby Lashley scheduled for next week’s Monday Night Raw. 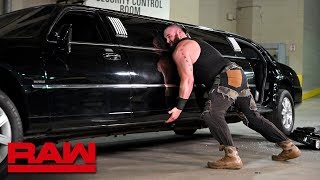 Opinion: Can Strowman ever get a break? If he’s not hurt then he’s being beaten for whatever reason or never winning the big match. The guy was the hottest thing in the company a little over a year ago and now he’s having a tug of war on Monday Night Raw and stuck in a feud over who is stronger. The guy could have been World Champion about a year ago but this is what we get instead. Go figure.

What do you think of Strowman? Will he ever be World Champion? Let us know in the comments below.

It Could Be Worse. Update On Cody After Gruesome Injury At Fyter Fest.