One more for the show. We are less than three days away from Payback and while that is not a lot of time, it is coming up in an extra hurry because of the accelerated pay per view schedule. WWE has been trying to set up a show in less than a week and that means they are going to be throwing a lot at us in a hurry. They added another match on Friday afternoon.

There have been a lot of stories taking place on WWE television over the last few months but one of the longest running at the moment is Seth Rollins vs. Rey Mysterio. Rollins has been attempting to take Rey out for months now, with others being brought into the feud. That includes Mysterio’s son Dominik, who has made his in-ring debut during the feud. There have been single and tag matches throughout the feud and now we know what is next.

WWE has announced that the Mysterios will face Rollins and Murphy in a rematch at Payback. The two teams faced off on this week’s Monday Night Raw with the match ending in a disqualification after Retribution interfered. This will be Dominik’s third match on the main roster after he faced Rollins in a singles match at Summerslam and their tag match from Monday Night Raw.

The first one worked well. Check out how their initial match went:

Opinion: I’m rather tired of this feud now and I don’t need to see the match again, but it seems like we could be on this for a good while. It’s rarely a good idea to have a match to set up a rematch less than a week later but WWE certainly seems to like the idea. Hopefully this one serves as a bit of a turning point for the feud, but you never know what you are going to get with this one.

What do you expect from the match? How long will the feud go? Let us know in the comments below. 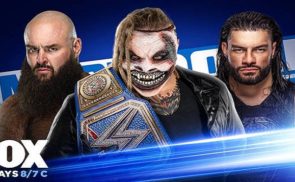