They’re big deals. WWE is the biggest wrestling company in the world but sometimes they completely miss the boat on some wrestlers. For one reason or another, someone doesn’t work out like they should, even if it is someone who has shown all of the abilities they need and then some. That was the case with two released wrestlers earlier this year, and now they are showing WWE what they missed.

Back in April, the Good Brothers (Doc Gallows and Karl Anderson) were released from the WWE despite signing multi-year contracts less than a year before. The two went on to sign with Impact Wrestling and could appear in New Japan again when they are allowed. It is clear that the pairing have all kinds of talent and now we are going to get to see it on display in a very different setting.

There is a lot here. Check out the interview, plus some of the team’s time in Impact Wrestling:

Opinion: This is certainly a different way to go and that’s a good sign for the team’s future. If they are going to be allowed to do something like this on a national cable network, both Impact Wrestling and Anthem certainly seem to think something of them. I’m not sure if the comedy stylings will work as a special, but it is something different and a show of faith in the Good Brothers, which is more than WWE gave them.

What do you expect from the special? What is next for the Good Brothers? Let us know in the comments below. 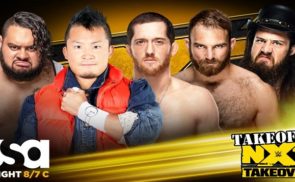 More Details On NXT Coronavirus Outbreak, What Was Changed