Well how the heck are you? WWE has been around for a very long time now and while there are all kinds of legends that you may remember, there are a lot more names who came and went without making that much of an impact. It doesn’t mean these people weren’t very talented, but there are still a lot of names you might not remember. One of them is making a surprise appearance.

Back in 2001, WWE debuted a new show called Tough Enough, a reality show with a chance for two wrestlers to earn WWE contracts. The first season guaranteed a male and female winner and while most of the wrestlers did not have that much experience, some did stand out above others. Both of them received contracts, though neither stuck around all that long. Now we are going to get an update after about fifteen years.

Tough Enough Season 1 winner Maven will be appearing on next week’s edition of the Bump on Thusday morning. This will be Maven’s first appearance with WWE since 2005 when he was released from the company. Maven wrestled for WWE from 2001-2005 and has not wrestled since 2016. There is no word on if Maven if appearing for any other reasons than catching up.

What a HUGE announcement for #WWETheBump next week!

Maven has done a few things in WWE. Check out his time with the company:

Opinion: Sure why not. This is the kind of thing that I always like to see as it’s such a random reunion with someone you probably haven’t thought of in a long time. Maven was never a major star but he is somewhat noteworthy for his Tough Enough accomplishments. Just getting to hear what he has been doing in a ten minute interview is a cool thing to see, just for the sake of the novelty.

What do you remember of Maven? Who else would you like to see make an appearance on the show? Let us know in the comments below. 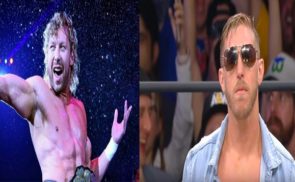