That’s not the next best step. Earlier this year, we saw a big change in the way the wrestling world worked as WWE released dozens of wrestlers from the company. This included several NXT names, some of which were never really major names on the show. It gave several other companies a batch of freshly available talent but one of them is not likely to be available for the time being.

There are a lot of wrestlers who have become big deals on the NXT Florida circuit without being able to make the jump up to the big time on the next level. Some of them might have made a cameo on the NXT television show but that does not mean that they are ready to move up to the big time. That was the with some of the names leaving NXT this year, but one of them will not be wrestling anytime soon.

According to Wrestlinginc.com, former NXT star Dan Matha, real name Dorian Mak, was arrested in Orlando, Florida. This comes after Matha reportedly did not appear in court, due to a traffic violation according to Heelbynature.com. The original problem began when Matha was stopped twice in 2019 for driving with a suspended license.

Earlier this year, his license was suspended again for unpaid traffic violations. Matha failed to appear in court on June 24 for driving with an expired registration and then failed to respond to a notice sent to his home on July 1. An arrest warrant was issued Monday and Matha has already made bail. He is scheduled to appear court on September 2.

Matha did appear on some NXT TV. Check out his time in the promotion:

Opinion: That doesn’t exactly sound good and I’m not sure how you can manage to have that many citations in a row and then not even appear in court. Matha is causing a lot of these issues for himself and while it is far from the most serious set of offenses, he might want to try to take care of some of these things before he gets in any more trouble than he is already in.

What did you think of Matha in NXT? Will he wrestle again elsewhere? Let us know in the comments below. 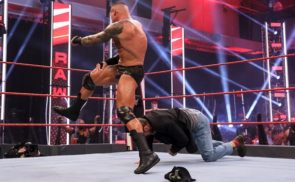 Wrestlers Not Pleased With Shawn Michaels On Monday Night Raw