Nice to see you again. There are a lot of people who have come and gone from WWE over the years and some of them are more memorable than others. The most memorable are often the ones who win some titles along the way, mainly because they are going to be making more appearances than most. If there is something about them that makes them more memorable, it makes things even easier. That is the case with someone who is making their return.

The women’s divisions have come a very long way in WWE over the last few years and a lot of that has been thanks to the Four Horsewomen. However, they are not the first group of female wrestlers to make an impact of their own, as a few previous generations of WWE women came off as a big deal. One of the more prominent names of days past is making a comeback.

According to PWInsider.com, former WWE Women’s Champion Melina has agreed to a new deal to return to the company. WWE had been trying to bring Melina back in for this year’s women’s Royal Rumble but were unable to come to terms. Melina debuted in WWE in 2005 before being released in August 2011. This will be her first full time work with the company since then, though she did appear at Raw Reunion in July 2019.

WWE is getting back someone special. Check out what Melina can do:

Opinion: This could be an interesting return as you have Mickie James doing well on Monday Night Raw, showing that her generation can still do a lot of good things. Melina may not have been the top star of the women’s division, but she is far from some joke who just happened to be there. If she can come in and give someone a rub then good for her and smart for WWE.

What do you think of Melina? What should she do in WWE? Let us know in the comments below. 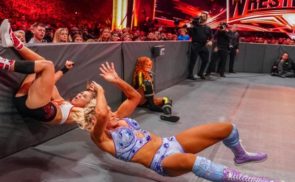