Welcome back. There are a lot of people working for WWE and at times it can be easy to lose track of some of them. With so many people around, sometimes a few of them might leave television for long periods of time for one reason or another, during which time the fans could forget about them. That makes a surprise return special, and fans were treated to two of them on Monday.

There are a few different reasons to write someone off of television, but there are far more ways to write someone out. WWE has all kinds of creative ways to get someone out of a storyline, though occasionally they don’t even bother to give you an explanation. This week’s show featured a return from both situations and they both came in rather different ways.

Two returns took place this week on Monday Night Raw. First, Jaxson Ryker made his return to one of the main shows as Elias’ new bodyguard, after only appearing once on Main Event earlier this month. Ryker had been taken off of television due to Twitter comments he made back in May. Later in the show, Mandy Rose made her return after missing just under a month, saving her partner Dana Brooke from Nia Jax and Shayna Baszler. Rose had been missing since November 16 due to an arm injury.

So which one went better? Check out both returns:

Opinion: This is the kind of thing that is going to draw some rather nice interest in a hurry as not only are they surprises, but they were well done surprises, which is often the harder part to pull off. I’m not sure how well the two of them are going to do in their new roles, but it is better than sitting on the sidelines. Ryker never got a chance to get going and Rose/Brooke were being groomed to be a top tag team, so the futures could be rather bright.

What did you think of the returns? Which one has the brighter future? Let us know in the comments below. 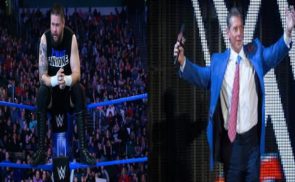 REVIEW: Saturday Night’s Main Event #14: You Can See It Coming