It’s already the grand finale as we’re live tonight for two hours. We have three tournament matches to go tonight and at least one other as Johnny Gargano/Tommaso Ciampa vs. two cruiserweights to be named tonight. There’s always the chance that they’ll add in another match, as well as the potential of something involving the Cruiserweight Title. Let’s get to it.

We open with a look back at the tournament, narrated by HHH.

The announcers talk about the show a bit.

Preview of the first semifinal match.

Video on all four semifinalists.

Mexico vs. England. Metalik dropkicks him at the bell to put Zack on the floor for a flip dive. A springboard Swanton Bomb gets a very close two but Sabre ties him in the ropes for some kicks and knees to the back. Sabre starts in on the neck to slow things down and puts Metalik’s head between his legs to crank on a leg.

Back up and Zack fires off more uppercuts but gets caught in a weird standing leglock until Sabre dives over to the ropes. Zack comes back with a dragon sleeper with his leg pulling Metalik’s arm back as he stays on the neck. They fight over a double arm crank until Sabre just kicks him in the face. Metalik does the same and gets two off a running shooting star press. Both guys get near falls off some rollups until Metalik gets something like an octopus hold.

Sabre reverses into a guillotine which is reversed into a Boston crab which is reversed into a rollup for two on Sabre. A slugout goes to Sabre so Metalik takes his head off with a clothesline for two more. Sabre’s running PK gets another near fall but Metalik kicks him in the face again. Something like an octopus hold has Metalik in more trouble but it breaks down so Metalik can survive. Sabre goes to the ropes but gets crotched and hurricanranaed down for a very close two. Metalik gets caught in a triangle until he flips over into a rollup for two more. Back up and a quick Metalik Driver eliminates Sabre at 13:14.

William Regal comes out and gives Metalik a big medal for winning.

With the help of a translator, Metalik thanks the fans and says he’s going to win the tournament.

Johnny Gargano and Tommaso Ciampa are out to prove something tonight against Noam Dar and Cedric Alexander. All that matters to them is a rematch with the Revival.

Japan vs. Philipines. Feeling out process to start with Perkins actually checking one of Ibushi’s kicks. The fans are mostly split as Perkins works on an armbar but tries to pull Ibushi in for the kneebar. Ibushi sprints over to the ropes so Perkins gets him on the mat in a headscissors. A running kick to the chest drops Perkins and a springboard missile dropkick makes it even worseJ for a very close near fall. Perkins rolls away from a Phoenix splash but gets caught in a wheelbarrow .

The kneebar goes on and sends Ibushi over to the ropes for the save. Ibushi is right back with a snap German suplex for two and it’s time for the hard kicks to Perkins’ chest. TJ breaks up the middle rope German deadlift suplex and counters the Golden Star Bomb into a DDT. That’s only good for two (Mauro: “CONJOINED TWINS CLOSE!”) and it’s off to the kneebar in the middle of the ring.

slam driver. Yet another Golden Star Bomb attempt is countered into the kneebar and Perkins even leans up to pull back on the neck for the huge upset at 13:51.

Perkins says he’s won one and now he needs to win one more.

Sasha Banks, Bayley, Kalisto, Jack Gallagher and Rich Swann are in the crowd.

Just an exhibition match. After some handshakes all around, it’s Alexander throwing Ciampa around in a bit of a surprise to start. It’s quickly off to Gargano for a knee to Dar’s jaw. They already tag off again so Cedric flip dives over the top to take Ciampa out. Everything breaks down and Gargano superkicks Dar before spearing Alexander through the ropes for two. A Michinoku Driver gets two on Gargano and we settle down to Ciampa kneeing Dar in the face until Cedric springboards in with a clothesline.

Everything breaks down again and a series of clotheslines and superkicks puts all four down. Dar reverses a kick and grabs an ankle lock on Johnny, only to have Ciampa go all psycho while stomping to break up the hold. Dar dives onto Johnny and Alexander hits a brainbuster for what looked like three but the referee says keep going. Gargano comes back in with his superkicks to both guys, setting up the running knee/superkick combo for the pin on Dar at 9:42.

Regal talks about helping to put the tournament together and trying to find people who weren’t as well known but could handle the rigors of this competition.

Corey Graves comes in to talk a bit as we fill in time before the main event.

We recap the semifinals.

Quick look at the trophy.

Mexico vs. Philipines. Wait a second though as HHH comes out to say this is going to be for the new Cruiserweight Title.

The title is vacant coming in of course. They trade some early rollups before Perkins grabs a modified octopus hold. Metalik rolls out and sends Perkins outside for a suicide dive with their heads crashing together. Back in and we hit a surfboard with Metalik’s boot in TJ’s back for extra pressure. Perkins gets over to the ropes and tries a suplex, only to have Metalik get a running start and hurricanrana Perkins off the apron a big crash.

Metalik follows him out with a big springboard flip dive to keep Perkins in trouble. The running shooting star misses though and Perkins grabs the kneebar, sending Metalik over to the ropes again. A dropkick to the knee looks to set up the Metalik Driver but instead it’s a DDT for two on Perkins.

The reverse Backstabber sets up another kneebar and Perkins pulls him back to the middle. He can’t get the leg crossed though and Metalik counters into a rollup for a close two. The Metalik Driver plants Perkins but the knee gives out again and it’s only good for two more. Perkins takes too long going up top and gets caught in a super Metalik Driver but that’s reversed into a full on kneebar to make Metalik tap at 17:45.

Perkins is presented with the trophy and title but he needs to see someone about his chest, which is terribly, terribly bruised. He talks about how this trophy is for everyone and he can’t believe he’s here. Perkins celebrates to end the show. 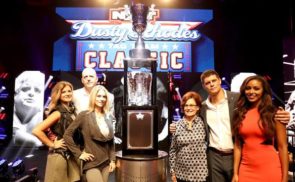 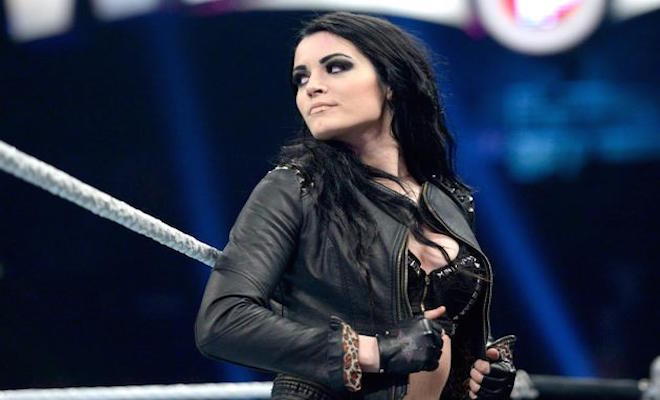 Paige Comments on Her Official Status With WWE