Just under the wire. It’s a very busy time for WWE at the moment with all kinds of things going on at the same time. This includes a series of major shows coming up all at the same time, with Super ShowDown being the next one up on Thursday. The Saudi Arabia show will have a lot of the usual suspects in action, though there has been a last minute change to a big match.

One of the tropes of the Saudi Arabian shows has been a first and only time title or award being given to the winner of a major match. These prizes rarely have any impact on the main WWE shows but it is nice to have them do something to make a match have some more importance. That was the case again this time around, but one of the participants has been changed.

This week on Monday Night Raw, Rusev was replaced by Rey Mysterio in the Tuwaiq Trophy Gauntlet match for Thursday’s Super ShowDown event. Rusev had originally been announced for the match but an updated graphic showed Mysterio instead. There was no reason given for the switch, though Rusev has been rumored to be in a contract dispute with WWE for several weeks now. Rusev last wrestled in a tag team match on the February 17 Monday Night Raw.

Enjoy him while you can. Check out what may be Rusev’s last match for the time being:

Opinion: I can’t say I’m surprised by this as I was surprised when Rusev was announced for the match in the first place. I’m not sure what the contract disputed between the two sides is over, but it’s another instance of Rusev not being around and that is a big part of why he has never broken through to the higher levels of the company. There has never been a consistency with him and that has been an issue for a long time now. Maybe it can be worked out, but I’m not getting my hopes up.

Are you surprised by the switch? Is it an upgrade? Let us know in the comments below. 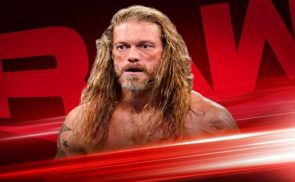 Welcome Back: Edge’s Next Monday Night Raw Appearance Confirmed, Complete With An Update On Storyline Injuries