It’s A Call Back: WWE Hall Of Famer Cameo Leads To Titles Being Vacated

She’s a star. There have been a lot of wrestlers throughout WWE’s history but only a few of them have reached legendary status. These are wrestlers that are remembered for a long time to come, though sometimes they are more remembered for something a little less positive. That was the case with a legend who appeared on WWE TV this week with a reference to her more infamous moment.

WWE Hall of Famer Alundra Blayze appeared on this week’s edition of NXT, where she accepted Roxanne Perez’s half of the NXT Tag Team Titles, leaving them officially vacant. Blayze announced a fatal four way for the vacant titles next week, with Valentina Feroz/Yulisa Leon vs. Ivy Nile/Tatum Paxley vs. Katana Chance/Kayden Carter vs. Toxic Attraction. Blayze’s appearance was in reference to Cora Jade dropping her title in the trash last week, ala Blayze with the WWF Women’s Title in 1995.

Opinion: It was quite the random cameo, but at least it does have something of a history. There were not many other options for the titles, as Jade and Perez splitting up left a pretty big problem with their future. If nothing else, it is kind of amazing to see Blayze back in the fold after what she did in 1995, but given how great she was and how long ago that was, I’d like to think everything is better.

What did you think of Blayze’s cameo? Who do you have winning the titles? Let us know in the comments below. 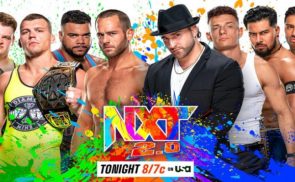