There are consequences to actions. The wrestling world is an interesting place. While not common, you will occasionally see some wrestling companies come together for business purposes. Some of these alliances work better than others but the idea is to make money by working together. In theory both companies should benefit from the move, but that does not mean the idea is always going to work. In a recent case, it certainly did not.

Outside of WWE, New Japan Pro Wrestling is the most powerful wrestling company in the world. They have been making massive expansions in recent years as their foot has been planted in the United States. They have a long way to go, but at the same time they are a lot further than a lot of other companies. They’re not all the way there yet and need some more help, but for not they aren’t getting it from a specific source.

According to the Wrestling Observer Newsletter, AXS TV’s recent decision to drop New Japan Pro Wrestling television from its television lineup is due to New Japan not being willing to work with Impact Wrestling. Anthem Media Group owns both Impact Wrestling and AXS TV. New Japan’s issues come from a time when Kazuchika Okada was sent to Impact Wrestling in 2010 on a learning excursion. During his time there, the company had Okada perform under a character inspired by Kato from the Green Hornet. Various attempts by Impact Wrestling to fix the relationship since have failed.

Okada did wrestle in Impact Wrestling. Check out a few of his matches:

Opinion: This is the kind of thing that New Japan isn’t going to let go and honestly, I can’t say I blame them. Impact Wrestling screwed up something horribly and New Japan isn’t likely to forget about that. The other thing to remember is how easy it may be for them to find another television outlet. Their product is popular and people are going to want to see it so the market is there. Now who will be interested in airing it?

Where do you see New Japan airing in the United States? Did they make a mistake by not working with Impact Wrestling? Let us know in the comments below. 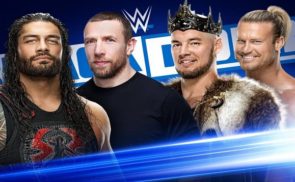