It’s the best result. The Coronavirus has wrecked havoc on the wrestling world and no one is immune to the virus. There are so many wrestlers and wrestling companies who have been shaken up by the pandemic and you never know when something else is going to happen. These things can come out of nowhere and that is the case again with a rather big AEW name.

One of the biggest stories coming out of last week’s AEW Dynamite was the announcement of a six man tag. #1 contender Lance Archer and Team Taz will be teaming up to face World Champion Jon Moxley, Will Hobbs and probably Darby Allin, with the caveat that Archer would grant Brian Cage the first shot at the World Title once he wins the championship. However, things are not going to go as they were originally planned.

Archer has announced that he has been diagnosed with the Coronavirus after being exposed to a family member who had also tested positive. He will be back to action in two weeks after quarantining. As a result, AEW has announced that the six man tag will not take place. Instead, Moxley will be defending the World Title in a singles match against Eddie Kingston.

When I returned from our last show, a family member was ill when I got home. I found out later a friend who had taken my family member to the Vet for our Dachshund was COVID positive. While at home, now I’ve also gotten sick tested positive. I feel ok, expect to see me in 2 wks

NEW CHAMPIONSHIP MATCH ADDED@MadKing1981 steps up to challenge @JonMoxley for his AEW World Championship.
Will it be #AndStill? Or #AndNew?

It should be a big title match. Check out what is coming up this week:

Opinion: First and foremost, the important thing here is Archer being ok. Hopefully he’s back ready to go in the two weeks because that’s far more important than any wrestling news. As for the title match, Kingston is a good choice as he can talk with anyone and the wrestlers he has in his corner could make for an interesting and even credible challenge to Moxley.

What do you think of the match? Who will take the title from Moxley? Let us know in the comments below. 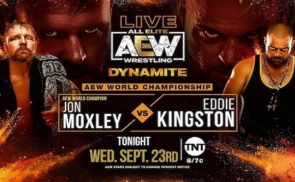