That could be good or terrifying. Vince McMahon is the most powerful man in all of wrestling He rules the WWE with an iron fist and there is no one close to what he can do in wrestling. Fans are well aware of this and it makes sense that they would want McMahon to push wrestlers that they like. They made their requests clear on Saturday and the boss actually responded.

During Saturday’s Takeover: Cardiff event, the fans chanted “ARE YOU WATCHING VINCE MCMAHON” multiple times during the event in multiple matches. The chants were meant to get McMahon’s attention and tell him that various NXT UK wrestlers deserved more attention. McMahon actually responded via Twitter, saying that he was watching and heard the fans.

I heard you, Cardiff. I’m watching and you are loud! #NXTUKTakeOver

I wonder if he was watching this one. Check out Saturday’s main event: 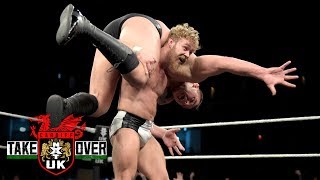 Opinion: I can believe that McMahon was watching the show (though it wouldn’t shock me if he wasn’t, which was fair enough) but what matters more than anything else is if things go anywhere. At the same time though, some of these stars might be better off staying in NXT UK at the moment. Some of the stars probably made an impression though and if they made it on McMahon, good for them.

What was the most impressive match at Takeover? Who should be called up first? Let us know in the comments below.