Welcome back. With so many wrestlers on the WWE roster, it can be more than a little tricky to keep track of them all. At some point someone is going to go away for a bit and that can set up a nice return down the line. This could be due to an injury or because of an angle, and over the weekend, one of the biggest names of all time returned with revenge on his mind.

Edge made his return to WWE this weekend at Summerslam, costing Judgment Day a tag match against the Mysterios. This ends a month plus long hiatus for Edge, who was attacked by and thrown out of Judgment Day on Monday Night Raw. Edge was reportedly scheduled to return earlier in the week on Monday Night Raw but the plans were changed due to Vince McMahon’s retirement from WWE.

Opinion: Edge coming back to deal with Judgment Day was a matter of when rather than if and that is a good thing to see. There is a natural story there, though it would have been nice to have the team built up a lot more during Edge’s absence. Edge vs. Finn Balor and Damian Priest will be good, though I’m not sure I can imagine either of them giving him much of a serious threat after what they’ve been doing lately.

What did you think of the return? Where do you see them going next? Let us know in the comments below. 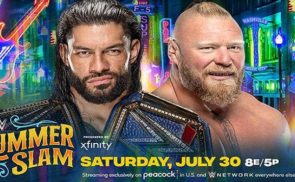 One More: Vince McMahon Was Surprised By A WWE Star’s Work Before His Retirement